SAN DIEGO (AP) — A seven-man jury was selected Tuesday to decide the fate of a decorated Navy SEAL charged with killing a teenage Islamic State prisoner under his care in Iraq and other war crimes.

Five Marines and two Navy members were chosen for the high-profile and politically charged court-martial of Special Operations Chief Edward Gallagher. The case is built around testimony from Gallagher’s fellow troops and highlights an unusual break in the secrecy of the elite special operations force.

Gallagher says disgruntled platoon mates fabricated the charges. His defense has been championed by his family and some congressional Republicans who have claimed that he’s a hero getting railroaded.

President Donald Trump even intervened to get Gallagher removed from the brig as he awaited trial and is said to be considering a pardon for him. 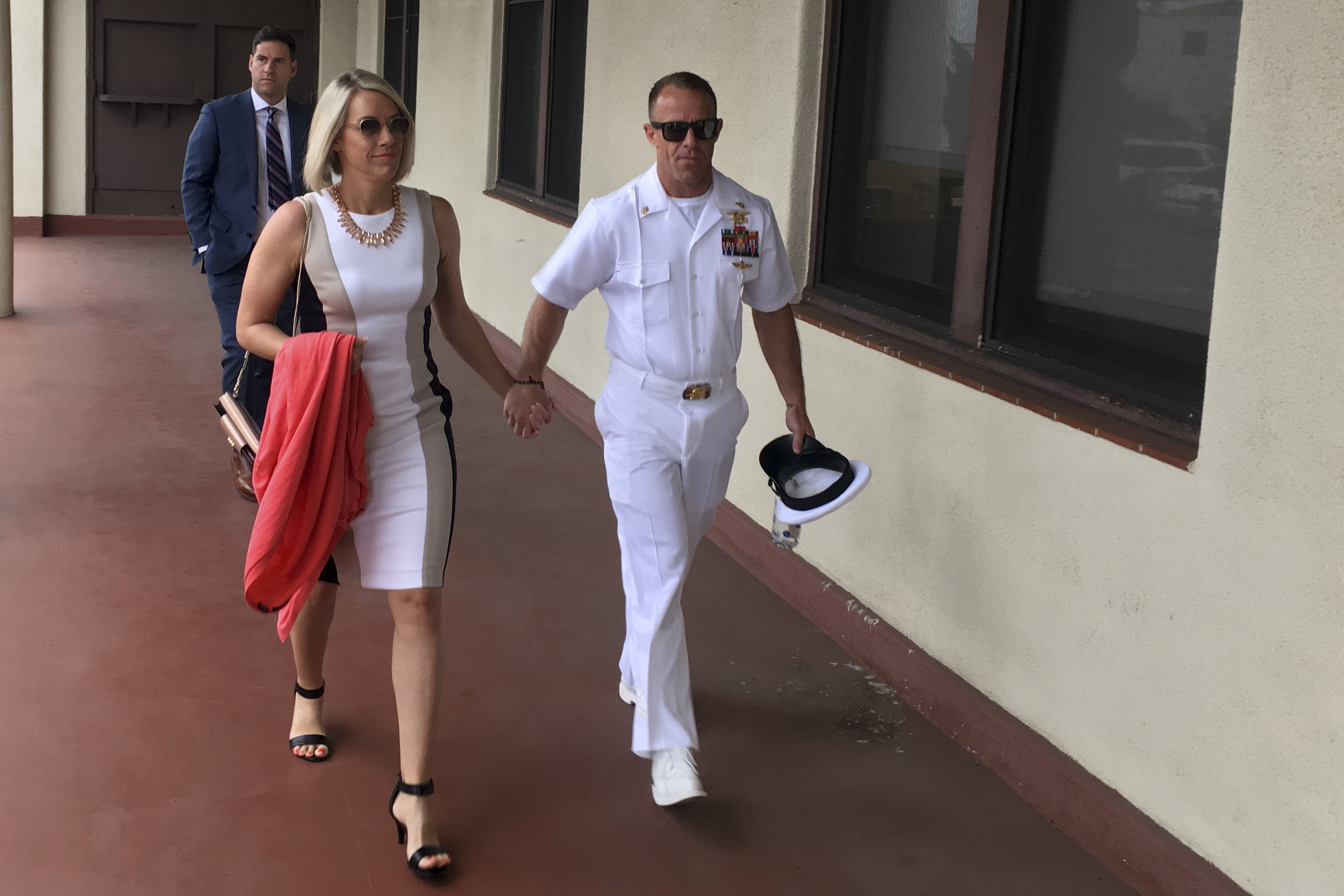 Navy Special Operations Chief Edward Gallagher, right, walks with his wife, Andrea Gallagher as they arrive for military court on Naval Base San Diego, Tuesday, June 18, 2019, in San Diego. Jury selection continued Tuesday morning in the court-martial of the decorated Navy SEAL, who is accused of stabbing to death a wounded teenage Islamic State prisoner and wounding two civilians in Iraq in 2017. He has pleaded not guilty to murder and attempted murder, charges that carry a potential life sentence. (AP Photo/Julie Watson)

Gallagher is accused of stabbing to death an injured prisoner and wounding two civilians — an elderly man and a school-age girl — in sniper shootings in Iraq in 2017. He has pleaded not guilty to murder and attempted murder — charges that carry a potential life sentence.

The jury picked from a panel of 12 is composed of five enlisted men, including a Navy SEAL and four Marines, plus a Navy commander and a Marine chief warrant officer.

Most of the jurors have served in conflicts in Iraq and Afghanistan.

Defense attorneys rejected several jurors, including the only woman, a Marine major who advocates for military sexual assault victims. They also had removed a Marine colonel who oversaw investigations, along with another Navy commander and a Marine master sergeant.

Prosecutors did not have anyone removed from the panel.

The case has been plagued by news leaks of court documents and a subsequent investigation to find the source of those leaks. The lead prosecutor was removed from the case earlier this month for tracking the defense team’s emails as part of an investigation into the leaks.

Defense lawyers unsuccessfully sought to have a Navy judge dismiss the case because they say investigators and prosecutors withheld evidence that could help Gallagher and violated his rights to a fair trial by embedding tracking software in emails sent to them.

The judge, Capt. Aaron Rugh, refused to dismiss the case. But he took steps to ensure Gallagher gets a fair trial and fix violations of his constitutional right against illegal searches and the right to counsel.

Rugh released Gallagher from custody, removed the lead prosecutor and reduced the maximum penalty he faces if convicted, to life imprisonment with parole instead of no chance of parole.

Biden says duty of all Americans, especially elected leaders, is 'to defend the truth and defeat the lies'

Biden calls on Americans to overcome divisions, declaring that 'without unity, there is no peace'