SANTA ANA, Calif. (AP) — A federal jury on Thursday found the Mongols motorcycle club guilty of racketeering and conspiracy, opening the way for the government to seize the club’s trademarked logo and ban members from wearing their cherished patches.

Federal prosecutors will ask the judge to fine the Mongol Nation — the entity that owns the club trademark — and order it to forfeit rights to the image of a bald, ponytailed Genghis Khan-style warrior in sunglasses astride a chopper motorcycle.

The attempt to defrock club members is an unusual tactic aimed at dismantling a West Covina-based organization that prosecutors alleged engaged in everything from drug-running to murder. Authorities are gambling that they can destroy the club’s identity and thus its allure. 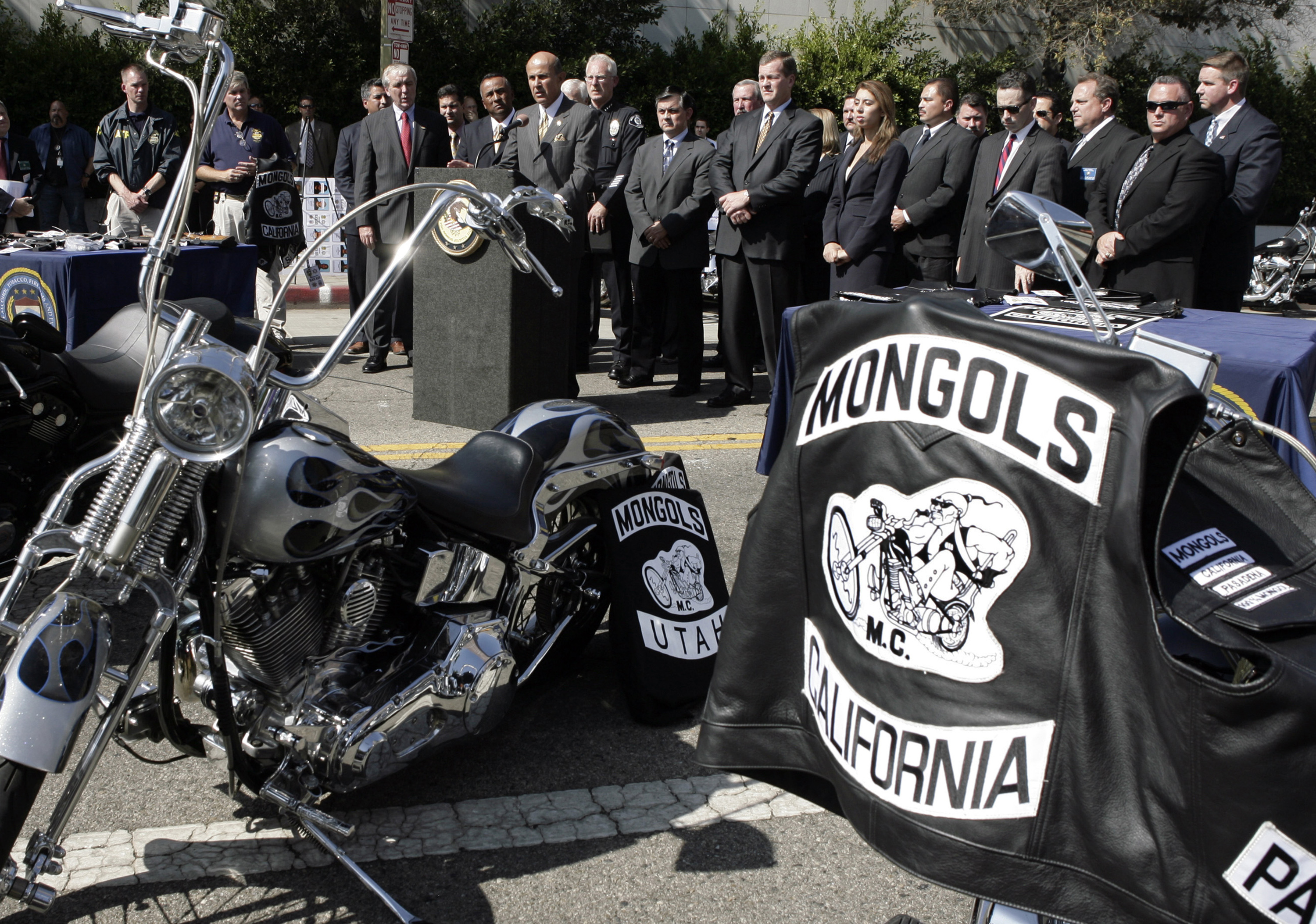 In this Oct. 21, 2008 file photo, Los Angeles County Sheriff Lee Baca, at podium, speaks during a news conference in Los Angeles. A vest with the trademarked Mongols logo is seen on a motorcycle at right. A federal jury has found the club guilty of racketeering and conspiracy, opening the way for the government to seize its trademarked logo. Jurors in Orange County ruled Thursday, Dec. 13, 2018, against the Mongol Nation, the entity that owns the image of a Mongol warrior on a motorcycle. (AP Photo/Ric Francis, File)

During the five-week trial, prosecutors testified that the Mongols were a violent criminal enterprise. In order to allege conspiracy, they drew a distinction between the Mongol Nation as being the club leaders and higher-ranking members, and the more general motorcycle club membership.

Defense attorney Joseph A. Yanny argued that individual club members may have committed criminal acts but the club is blameless and kicks out members under a “zero-tolerance” policy for such activity.

The government had targeted the club because of its large Mexican-American population and had escalated the “wrongful acts of a few individuals” into a “group conviction,” Yanny said during trial.

“These are ordinary people,” he said. “They are hardworking people. You don’t see the Hell’s Angels here.”

But Assistant U.S. Attorney Christopher M. Brunwin described the club to jurors as “a violent organization that attacks people, that kills people and that distributes drugs,” and even rewards members who kill with a special skull-and-crossbones patch.

At trial, he mentioned the killing of a Hells Angels leader in San Francisco, a Nevada brawl in 2002 that left members of both clubs dead, and the death of a Pomona policeman who was killed as he broke down the door of a Mongols member to serve a search warrant in 2014.

The Mongols were founded in 1969 in the eastern Los Angeles suburb of Montebello. The mainly Hispanic membership is estimated to include more than 1,000 riders in chapters worldwide.

In 2008, dozens of members were charged with racketeering based on an investigation in which agents from the Bureau of Alcohol, Tobacco, Firearms and Explosives infiltrated the club.

Seventy-nine defendants pleaded guilty and a judge ruled that they should forfeit the Mongols trademark but later reversed the decision.

The new case was filed in 2013. It was thrown out two years later by U.S. District Judge David O. Carter but he was overruled on appeal.

Last month, former pro wrestler and Minnesota governor Jesse Ventura testified at the trial, denying that the Mongols were a criminal gang. Ventura testified that he neither committed crimes nor was told to do so when he was a club member in the 1970s.