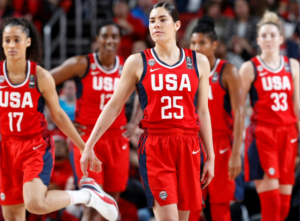 The U.S. qualified for the semifinal by having the best record in the pool round, 6-1. France advanced with a 16-14 victory over Japan on Tuesday in a quarterfinal. Japan is the only team to have defeated the U.S. in the tournament, winning 20-18 Monday night, California time, in the final pool round game for both teams.

The U.S.-France game is set to begin at 1 a.m. Wednesday, California time, and will be televised by USA Network. It will be streamed at stream.nbcolympics.com/basketball-3×3-semifinals-mens-womens.

Plum scored six points as the U.S. defeated France, 17-10, in the tournament opener for both teams Saturday.

Both games will be televised by USA Network and streamed at stream.nbcolympics.com/basketball-3×3-gold-bronze-medal-games-mens-womens.

Plum shares the tournament scoring lead with Olga Frolkina of the Russian Olympic Committee, both averaging 6.3 points per game.

All Russian athletes at the Tokyo Games are competing for the Russian Olympic Committee. A ruling last year by the Court of Arbitration for Sport banned Russia’s flag, anthem and team name as punishment for an extensive doping program and cover-ups.

3X3 is played with a 12-second shot clock on a half court. Baskets inside the arc and free throws are worth one point and baskets made from outside the arc are worth two points.

The winner is the first team to score 21 points or the leading team at the end of the 10-minute game clock.