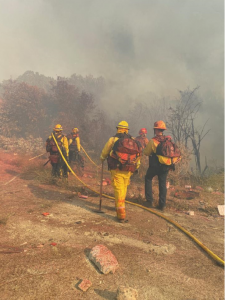 UPDATE: As of 9 p.m. May 24, forward spread of the fire has stopped and evacuation orders in zone 2 have been downgraded to an evacuation warning.

JURUPA VALLEY (KUSI) – Residents in parts of Jurupa Valley have been evacuated as a brush fire continues burning 200 acres in the Santa Ana River bottom.

The Lake Fire was estimated to be only three acres around the time the fire was reported at 11 a.m. on May 24 near Lakeview Avenue and Pedley Road.

With the dry brush in the area, the fire has potential to reach 1,000 acres, firefighters said.

Thus far, a school, a country club, a church, and a shopping complex have been evacuated.

No injuries have been reported and heavy smoke smothered the Van Buren Boulevard overpass.