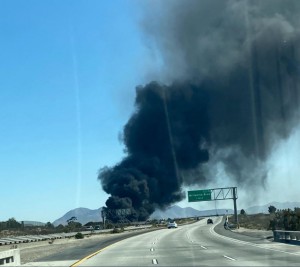 OTAY MESA (KUSI) – Tall plumes of black smoke could be seen from afar as the Cactus Fire erupted from a wrecking yard around 12:30 p.m. Saturday at 1950 Cactus Road in the South Bay, the San Diego Fire Department wrote on Twitter.

20 residences were evacuated and fire officials asked the public to avoid Cactus Road as they expected to be on the incident for several hours.

About 130 personnel from SDFD, CVFD, Imperial Beach Fire, and CalFire San Diego were assisting with the fire.

This is a developing story and KUSI will continue to update readers with more information as it comes.

This is a building on the property of the yard. As you can see, the wind is significant.
About 130 personnel are committed to this fire. #cactusfire pic.twitter.com/ivBEmEyHf0

Total of 20 residences evacuated. Please avoid Cactus Road.
Firefighters will be on this incident for several hours.
Thanks to @ChulaVistaFD @CALFIRESANDIEGO and Imperial Beach Fire for their assistance. #cactusfire pic.twitter.com/BlZPhh4Nfb