SAN DIEGO (KUSI) – The Center for Biological Diversity Friday filed a formal notice of its intent to sue the Trump administration over its alleged failure to protect four plant and animal species, including a butterfly currently found only in San Diego County and Baja California.

The organization alleges the U.S. Fish and Wildlife Service has failed to finalize Endangered Species Act listing determinations for the four species within a required one-year timeline.

Among those are the Hermes copper butterfly — found only in San Diego County and Baja California — the Sierra Nevada red fox, Bartram’s stonecrop and the Beardless chinchweed. 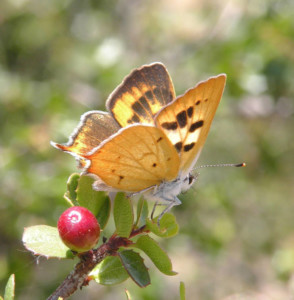 The Center for Biological Diversity says each species has “very limited ranges and small population sizes.”

In a letter dated Friday to Secretary of the Interior David Bernhardt and U.S. Fish and Wildlife Service Director Aurelia Skipwith, the organization states that the Hermes copper butterfly faces numerous threats, which include urban sprawl, climate change, fire and drought. The center initially petitioned for its protection in 2004.

“The Endangered Species Act is incredibly successful at preventing extinctions and reversing declines,” said Justin Augustine, a senior attorney at the center. “But that success can only be realized for these four species if they receive the protections they’re due. The Biden administration has a lot of catching up to do for endangered species.”

The Trump administration protected 25 species under the Endangered Species Act, the fewest of any administration since the act was passed in 1973, according to the Center for Biological Diversity.

UCSD study: even light activity could help with mobility in aging women