Like Mike: LeBron overwhelmed after passing Jordan, his hero

LOS ANGELES (AP) — From the very first day LeBron James picked up a basketball, he wanted to be like Mike.

James and his closest friends idolized Michael Jordan while they grew up together on Akron’s competitive playgrounds and tough streets. As James grew into a tantalizing basketball prospect capable of jumping from high school to the NBA as the No. 1 draft pick, he studied, imitated and drew profound inspiration from Jordan’s tongue-wagging dunks, that fadeaway jumper, his competitive fire — even the little details of the way Jordan wore his sneakers and shorts.

James proudly put No. 23 on his back as soon as he could get it as a high school sophomore. 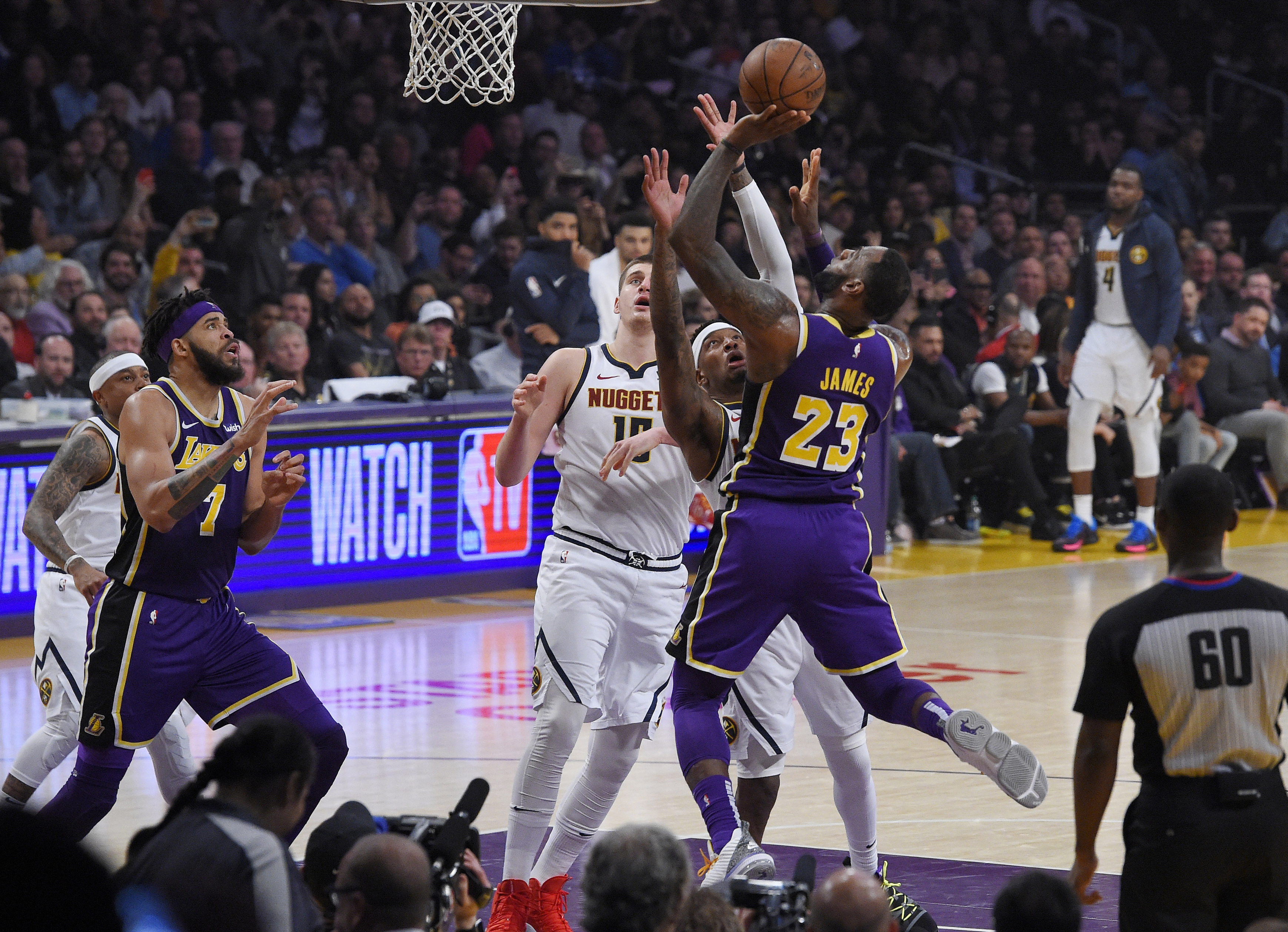 “He was everything,” James said.

“I want to congratulate LeBron on achieving another great milestone during his amazing career,” Jordan said in a statement to The Associated Press on Thursday through his spokeswoman, Estee Portnoy.

When James surpassed Jordan’s career points total Wednesday night, he did it in a pair of Nikes with “Thank You M.J.” written neatly on the side. That tribute doesn’t begin to encompass what Jordan’s radiance meant to a youngster who dreamed of finding a better life through basketball.

“M.J. was an inspiration,” James said. “M.J. was the lightning in a bottle for me, because I wanted to be like him.”

James has grown into a 34-year-old man with three championship rings and a redoubtable 16-year NBA career. Yet he is still in awe of Jordan, who has represented the apex of achievement for his entire life.

James moved past Jordan into fourth place on the NBA’s career scoring list with a driving three-point play in the second quarter of the Los Angeles Lakers’ 115-99 loss to the Denver Nuggets. He bettered Jordan’s 32,292 career points with another variation of the brute physical brilliance that defines his playing style — a style that was influenced by Jordan’s combination of grace and aggressiveness.

James finished with 31 points, seven rebounds and seven assists. His struggling Lakers rallied late, but dropped their fourth straight game in a season that appears to be lost.

Every loss eats at James, yet he fidgeted in front of his locker afterward with the anxiousness of a rookie, still buzzing over the enormity of the moment in his life.

“When you’re an inner-city kid from Akron, Ohio, like myself and my guys growing up, you look for anything that can inspire you,” James said. “You’re always just up against the numbers of failing. The percentages of guys like myself — single-parent household, only child, underprivileged — (the chance of) making it out is not high at all. M.J. had a lot to do with me making it out, along with my mother, along with the city itself, along with the Little League coaches I had. But Mike had no idea what he was doing for a kid that was growing up a 45-minute flight away from Chicago, where he was putting in that work.”

James acknowledged he missed most of the tribute video aired at Staples Center during the timeout after his milestone points. That’s because he was crying into a towel on the Lakers’ bench.

James is among the last active players who were old enough to witness Jordan in his prime with the Chicago Bulls. Little LeBron would buy packs of basketball cards hoping for a Jordan, and he would study every aspect of Jordan’s game, down to the way he wore his calf sleeve turned slightly inside-out so that the red lining showed.

James couldn’t afford Air Jordans, but he remembers walking through the mall and marveling at the pristine red-and-black shoes. They inspired him to dream of having his own shoes, a natural result of being the star he hoped to become.

“You guys have no idea what M.J. did for me and my friends growing up,” James said. “Just in a sense of, some days where you just don’t feel like you’re going to make it to the next day where I grew up, because of everything that’s going on. Like I wrote on my shoes today, I thank M.J. more than he would ever know. I’ve got to carry it on to the next kid. Hopefully I can inspire the next kid.”

James is an inspiration to a generation now, many of whom have already reached the NBA. Several of the Nuggets spoke of idolizing James while they grew up, and his own Lakers locker room includes teammates playing alongside one of their boyhood heroes.

James trails only Kareem Abdul-Jabbar (38,387 points), Karl Malone (36,928) and Kobe Bryant (33,643) on the scoring chart. He seems likely to become the top scorer in NBA history if major injuries don’t cloud his next three seasons with the Lakers — but those moments just might not resonate as profoundly for James.

This achievement also might be the biggest highlight of a disappointing season with the Lakers (30-35), who have fallen to the fringe of playoff contention. The struggles bother James, who has played in the last eight NBA Finals and hasn’t missed the postseason since 2005.

But James still seems relatively content with his move to Hollywood, where he is closer to his burgeoning career as an entertainment mogul. He has spoken repeatedly of patience with the young Lakers while the club attempts to land a second superstar to turn James’ next team into a title contender.

Even if this season is a failure, James will never forget the night when he made a historic connection with his childhood hero.

Hecklinski is OUT, Jeff Horton back as Aztec's Defensive Coordinator