It is the largest jump in cases since the county confirmed its first case three weeks ago, and coincides with the highest number of overall test results since the crisis began, with 1,538 results coming in Tuesday.

The county did not provide any additional information regarding the two deaths. 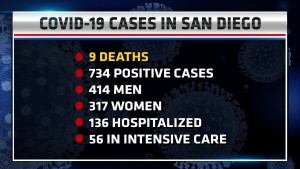 Dr. Wilma Wooten, county public health officer, said there was an additional death which was probably related to the illness but not confirmed and as a result not included in the latest numbers.

There have been 136 San Diego residents hospitalized due to the illness since the county began recording numbers, with 56 needing intensive care. The county has not provided hospital discharge numbers.

Despite the marked increase, County Supervisor Nathan Fletcher warned not to read too much into them at this point.

“There’s not a lot you can read into day-to-day reports,” he said. “We need to look at the data week-over-week.” 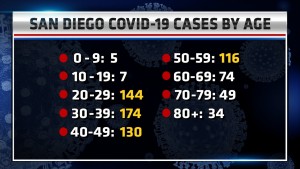 “We believe the uptick in cases will continue and continue for the foreseeable future,” Fletcher said.

The county reported a total of 481 ventilators in 19 of the county’s 23 hospitals — with another 75 ready to deploy in an emergency — 69 being serviced, 600 requested from California and 125 ordered from elsewhere.

Fletcher said county health teams monitor their ability to respond to the crisis with three “S”s — stuff, staff and structure. California responded to the lack of some of these in San Diego County by sending a 250-bed mobile field hospital and a 225-bed hospital unit, which Fletcher said comes with staff.

Additionally, Fletcher said the county was working with a local university to secure an empty dormitory for patients too sick to go home, but not sick enough to remain in the hospital. He said the 200 to 250 beds the dorm will provide will “raise the bar” on the number of beds available for any surge in COVID-19 cases. This “alternative care center” would open sometime in the near future, he said.

County Chairman Greg Cox encouraged residents to continue to go to grocery stores and order takeout food from restaurants while maintaining physical distancing and proper sanitization protocols, even as two employees of a Sprouts Farmers Market in northern Carlsbad tested positive for COVID-19 on Monday.

“It is safe for you to go to the grocery store or order takeout from restaurants,” Cox said. “There is no data suggesting the illness is transmitted via food. Like all moms say, ‘eat, eat.”’

Both employees work at the grocery store off El Camino Real south of state Route 78  in the Carlsbad Plaza South Shopping Center. One employee last worked in the store March 17, and the other last worked on March 15, according to the company.

“If you have a sick worker, they must stay home,” Fletcher said, urging employers to call 858-505-6814 to report any sick workers.

Co-workers of the Albertson’s employee who display any symptoms of the coronavirus infection will be sent home, but there are no tests pending in this case, McDonald said.

Also Tuesday, officials announced that one passenger and three crew members aboard the Celebrity Eclipse cruise ship docked in San Diego tested positive for COVID-19. The passenger was evacuated from the ship Monday morning with cardio-vascular and respiratory problems before later testing positive. That passenger remains in serious condition.

Some 1,200 passengers disembarked from the ship Monday, said Dr. Eric McDonald, the county’s epidemiology director. Each passenger underwent health screenings and was advised by doctors and Celebrity Cruises to maintain a 14-day quarantine once at home. The ship was scheduled to continue disembarking Tuesday, and it will be the last cruise ship allowed to release passengers in
San Diego County until further notice.

McDonald said disembarkation should finish before midnight and the ship will leave San Diego early Wednesday.

County health officials announced Monday that cruise ships will no longer be allowed to disembark passengers or crew members starting April 1, but ships may be allowed to dock to fuel up or restock on provisions with permission from the county’s health officers.

San Diego State University announced Monday that a third student has tested positive for COVID-19. The latest case at the university involves a student who began feeling ill sometime after moving out of on-campus housing, according to the university.

It was not immediately clear when the student moved off campus, although all but 200 students had left the dorms as of March 23, the San Diego Union-Tribune reported.

Dr. Nick Yphantides, San Diego County’s chief medical officer, reported that four “congregate living sites” — which can be assisted living facilities, prisons or anywhere where large groups of people congregate in one living location — have tested positive for 33 cases and include two of the county’s deaths from the illness.

Those sites were under strict health protocols and under further investigation, he said.

The risk of contracting the coronavirus disease can increase from vaping and smoking, McDonald said.

“Any lung disease or condition would put you at risk,” McDonald said. “We don’t have specific cases so far, but our strong recommendation is to use this opportunity to quit.”

“Don’t be reluctant to seek care if you need it,” he said.

The county also extended public health closure orders indefinitely that were set to expire. The closure order applies to schools, nonessential businesses, restaurants, gyms and fitness centers, he said, and anyone 65 or older should continue to quarantine themselves at home.

Parks in Vista closed Monday in an attempt to limit the spread of coronavirus by encouraging social distancing. The North County city announced the decision on Sunday and had 10 confirmed cases of COVID-19 as of Saturday.