Lockdowns ease worldwide, but political heat rises in US 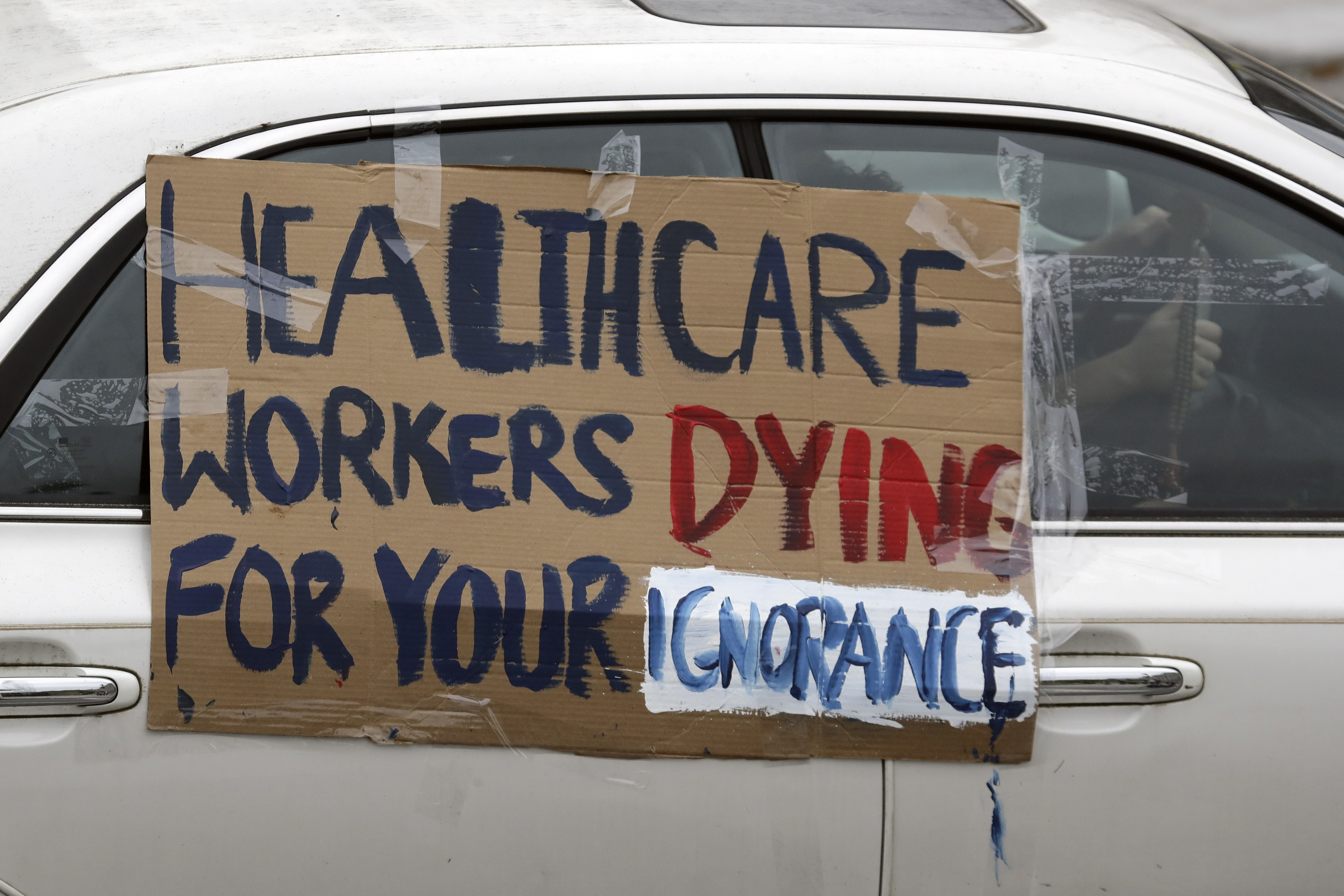 A driver displays an alternate opinion as she passes protesters demonstrating at the Tennessee state capitol to speak out against the state’s handling of the COVID-19 outbreak Sunday, April 19, 2020, in Nashville, Tenn. Tennessee is under a stay-at-home order due to the coronavirus outbreak except for essential personnel. (AP Photo/Mark Humphrey)

COPENHAGEN, Denmark (AP) — Tattoo parlors and hair salons in Denmark. Beaches in Australia. Bookstores in Germany. Countries around the world that have seen coronavirus infections flatten out began easing their lockdowns Monday, while the U.S. moved more cautiously and the debate took on an increasingly political edge.

Over the past few days, President Donald Trump openly encouraged protesters who have been demanding the lifting of the state-imposed stay-at-home orders, and some states — mostly those under Republican leaders — have taken steps to relax some restrictions. But other governors have warned that they can’t move ahead without help from the federal government in expanding testing.

Around the globe, the game plan is to open up but maintain enough social distancing to prevent new flareups of the virus that has infected 2.4 million people worldwide, killed more than 165,000 and crippled the world economy.

The easing of the lockdowns “is not the end of the epidemic in any country. It’s just the beginning of the next phase,″ the head of the World Health Organization, Tedros Adhanom Ghebreyesus, told G-20 health ministers in an online meeting.

He sternly warned governments not to rush to return to normal, saying, “It is critical that these measures are a phased process.”

The death toll in the U.S., the worst-hit country by far, was more than 40,000 with over 750,000 confirmed infections, according to a tally by Johns Hopkins University of government reports. The true figures are believed to be much higher, in part because of limited and difficulties in counting the dead.

While Trump and members of his administration say parts of the nation are ready to begin a gradual return to normalcy, many governors say they lack the testing supplies they need and warn that if they reopen their economies too soon, they could get hit by a second wave of infections.

Egged on by the president, protesters have taken to the streets in some states, complaining that the shutdowns are destroying their livelihoods and trampling their rights. Defying the social-distancing rules and, in some cases, wearing no masks, demonstrators have berated their governors and demanded the firing of Dr. Anthony Fauci, the government’s top infectious-disease expert.

But on Monday, Fauci warned: “Unless we get the virus under control, the real recovery economically is not going to happen.”

“If you jump the gun and go into a situation where you have a big spike, you’re going to set yourself back. So, as painful as it is to go by the careful guidelines of gradually phasing into a reopening, it’s going to backfire,” he said on ABC’s “Good Morning America.”

In the past few days, Florida gave the OK for beaches to reopen, and Texas announced plans to allow stores to offer curbside service.

Elsewhere around the world, Isabel Pennekamp, shopping in the German city of Cologne, was grateful that parts of the country reopened small stores.

“Well, I think it’s good, because now people can get out a bit more and normality is a bit more possible again,” she said.

German Health Minister Jens Spahn said the gradual easing “is a step-by-step process where, after time, we will evaluate what consequences it has had for the infection.”

Cars will again begin rolling off some production lines in Germany, Sweden and Slovakia. In Australia, the production of the country’s longest-running soap opera, “Neighbours,” planned to restart by having separate crews for each key filming site. One city council in Sydney reopened beaches but stressed they were only for exercise like swimming, running and surfing, and not for sunbathing.

“Living along the coast, I know how important our beaches are to the mental and physical health of so many,” said Danny Said, mayor of Randwick.

Hair salons, dentists, physiotherapists and even tattoo parlors were allowed to reopen in Denmark but it was not business as usual. Christel Lerche sprayed customers’ chairs with alcohol at her salon in suburban Copenhagen and provided hand sanitizer and plastic coat hangers — to be cleaned after each use — to clients keen to get their hair trimmed or styled for the first time since restrictions began on March 11. No magazines were left for customers to share.

India eased the world’s largest lockdown to allow some manufacturing and agricultural activity to resume — if employers can meet social distancing and hygiene standards. The move came as India recorded its biggest single-day spike in infections.

But not every government was ready to take its foot off the brake just yet.

In Italy, tensions have been growing between northern regions, which are pushing to reopen industry despite being hardest hit by the coronavirus, and the south, which fears contagion if the lockdown is eased. Premier Giuseppe Conte is expected to outline what a “Phase 2” can look like this week, with the nationwide lockdown set to be lifted on May 4.

Still, Gucci on Monday restarted some workshops for leather accessories and shoes, agreeing with unions to provide “maximum security for workers.’’ The luxury fashion industry is a major part of the economy in Italy, and deadlines are looming to produce fall collections.

In Britain, where Prime Minister Boris Johnson is still recovering from a bout of COVID-19 that saw him hospitalized in intensive care, a lockdown imposed March 23 is due to last at least until May 7, and ministers have cautioned that measures are unlikely to be significantly loosened in the short term.

France also is still under a tight lockdown, although starting Monday, authorities allowed families, under strict conditions, to visit relatives in nursing homes once again.

In some places, lockdown fatigue was on the rise. Dutch police broke up two illegal gambling events and fined dozens of people for breaching local rules.

In Japan, authorities emphasized that the time is not ripe to loosen restrictions by mowing down tens of thousands of tulips in full bloom near Tokyo. The problem was that people were coming to admire the flowers.

“This situation is now about human life,” said city official Takahiro Kogo. “It was a heart-wrenching decision, but we had to do it.”

Corder reported from The Hague, Netherlands and Perry from Wellington, New Zealand. AP writers worldwide contributed to this report.