SAN DIEGO (KUSI) – An alleged drunk driver nearly struck two men who were walking in a parking lot in the Midway area of San Diego then got out of his car and swung a machete at them, cutting both, authorities said today.

The suspect, identified as 25-year-old Ian Smigels, “was driving his car in a reckless manner in a business parking lot,” Heims said.

Two men in their early 40s were walking in the parking lot and “almost got hit by the suspect,” he said.

Smigels got out of his car with a machete and swung at the victims inflicting a non-life threatening cut on one man’s forehead and a minor cut on the nose of the other, Heims said.

The two victims held Smigels down until police arrived and he was arrested for suspicion of assault with a deadly weapon and DUI, the officer said.

The man with the forehead wound was taken to a hospital for treatment, the second man declined to go to the hospital, Heims said. 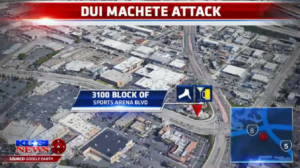