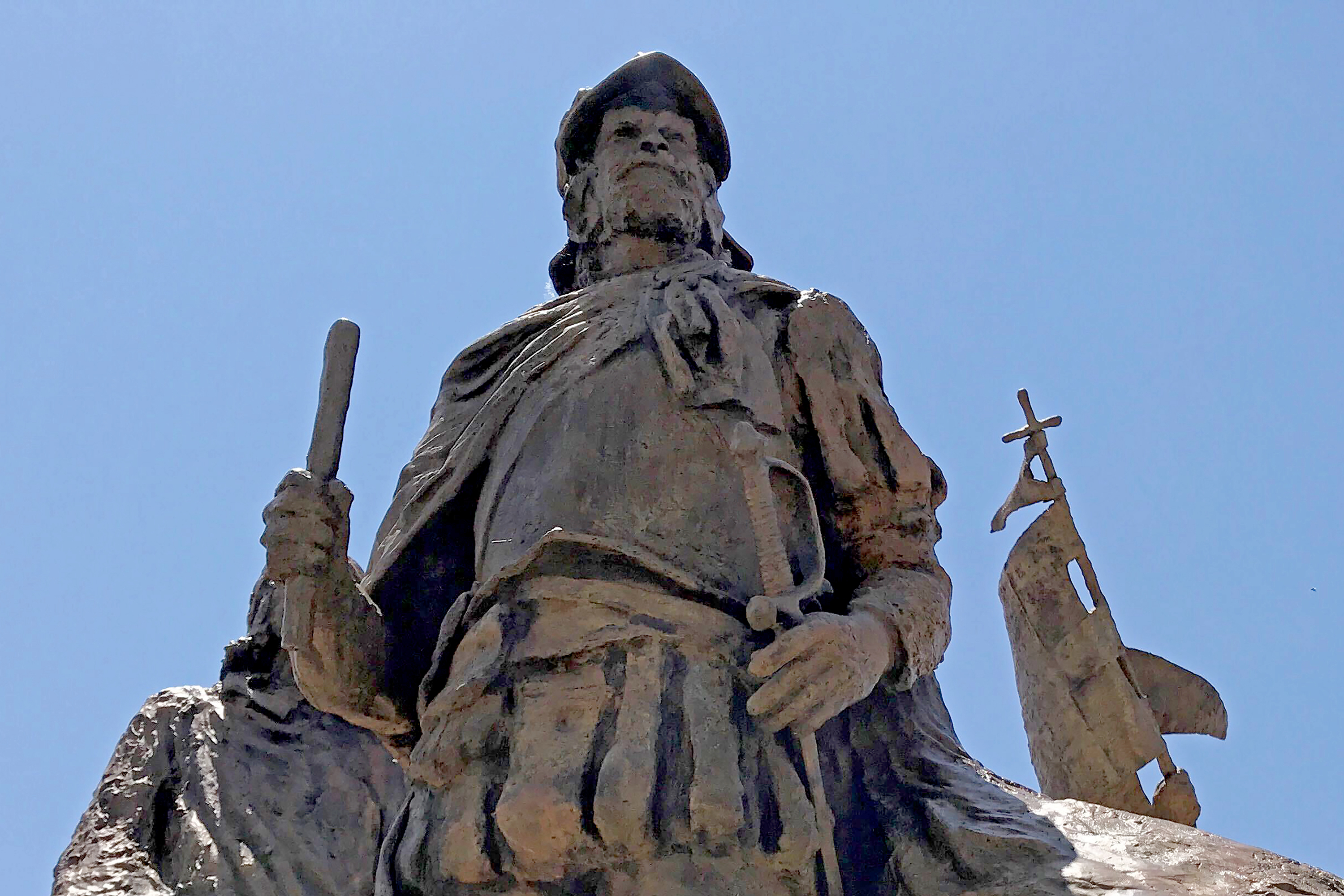 This bronze statue of Don Juan de Onate leading a group of Spanish settlers from an area near what is now Ciudad Chihuahua, Mexico, to what was then the northern most province of New Spain in 1598 stands outside the Albuquerque Museum in Albuquerque, N.M., on Friday, June 12, 2020. The collection of statues, which includes an indigenous guide, a priest, women settlers and soldiers, is titled “La Jornada.” Two public statues of Spanish conqueror Juan de Oñate in New Mexico are drawing renewed attention and criticism as memorials erected in honor of Confederate leaders and other historical figures worldwide become a focus of protests. (AP Photo/Susan Montoya Bryan)

ALBUQUERQUE, N.M. (AP) — A 31-year-old man has been arrested in a shooting that happened as protesters in New Mexico’s largest city tried to tear down a bronze statue of a Spanish conquistador outside the Albuquerque Museum, police said Tuesday.

The shooting occurred near a Monday night confrontation between protesters and a group of armed men trying to protect the statue of Juan de Oñate before protesters wrapped a chain around it and began tugging on it while chanting: “Tear it down.” One protester repeatedly swung a pickax at the base of the statue.

Moments later, a few gunshots rang out down the street and people yelled that someone had been shot.

The shooting prompted the city to announce that the statue would be removed until officials determine the next steps.

Police in a statement said detectives arrested Stephen Ray Baca, son of a former Bernalillo County sheriff, and that he was jailed on suspicion of aggravated battery with a deadly weapon.

Baca had been among those trying to protect the statue when protesters “appeared to maliciously pursue him,” according to a criminal complaint filed by police in connection with the charge lodged against Baca.

Video posted on social media showed protesters hitting Baca, a former Albuquerque City Council candidate, with what police described as a longboard skateboard and punching him. Then he opened fire with a handgun.

After the shooting, other armed people encircled Baca in an apparent attempt to protect him, the video showed.

Online court records did not list an attorney for Baca who could comment on his behalf. The man who was shot was hospitalized Monday night in critical but stable condition, said Albuquerque police spokesman Gilbert Gallegos.

The Albuquerque Journal reports members of the New Mexico Civil Guard, a self-described civilian militia group, showed up to protect the statue and intervened as protesters tried to remove it with a pickax and chain. But it’s not clear if Baca was there with the group and he appeared to be dressed differently from members.

“If this is true will be holding them accountable to the fullest extent of the law, including federal hate group designation and prosecution,” Geier said.

Officers during the confrontation used tear gas and flash bangs to protect the officers who intervened and to detain Baca and the armed people who had surrounded him, Gallegos said. He said they were disarmed and taken into custody for questioning as police worked to secure the scene. He said detectives were investigating with the help of the FBI.

“The shooting tonight was a tragic, outrageous and unacceptable act of violence and it has no place in our city,” Mayor Tim Keller said in a statement. “Our diverse community will not be deterred by acts meant to divide or silence us. Our hearts go out the victim, his family and witnesses whose lives were needlessly threatened tonight. This sculpture has now become an urgent matter of public safety.”

Democratic Gov. Michelle Lujan Grisham issued a statement directed at the armed people, saying they were there to menace protesters. She said there is no room in New Mexico for any sort of escalation of what she called “reckless, violent rhetoric.”

“The instigators this evening will be rooted out, they will be investigated, and they will be held accountable to the fullest extent of the law,” she said.

The violence came hours after activists in northern New Mexico celebrated the removal of another likeness of Oñate that was on public display at a cultural center in the community of Alcalde. Rio Arriba County officials removed it to safeguard it from possible damage and to avoid civil unrest ahead of a scheduled protest.

A forklift pried the massive bronze statue of Oñate on horseback from a concrete pedestal. Cheers erupted among bystanders who viewed the memorial as an affront to indigenous people and an obstacle to greater racial harmony, though several people also arrived to defend the tribute to Oñate.

The Oñate statues have been a source of criticism for decades.

Oñate, who arrived in present-day New Mexico in 1598, is celebrated as a cultural father figure in communities along the Upper Rio Grande that trace their ancestry to Spanish settlers. But he’s also reviled for his brutality among Native Americans.