Man in wheelchair struck, killed by Amtrak train in Carlsbad 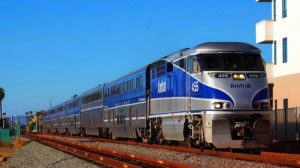 SAN DIEGO (KUSI) – A man in a wheelchair was struck and killed by an Amtrak train in Carlsbad Monday.

San Diego County Sheriff’s Department deputies responded just before 5 p.m. to the Carlsbad Village Drive grade crossing, near Interstate 5, on reports of the collision and found that the man had been struck by a northbound train, according to Deputy Joseph Pirri.

The man was pronounced dead at the scene. His name was withheld pending notification of his next of kin.

An investigation into the collision is ongoing and anyone with information was asked to call the San Diego County Sheriff’s Department non- emergency line at 858-565-5200.

Get ready to pay more for your utility bill, SDG&E is raising their rates

Former city attorney, Mike Aguirre, to file lawsuit against the NFL for moving the Chargers to LA

Farmers Insurance Open gets ready to tee off Jan. 26 at Torrey Pines

Farmers Insurance Open gets ready to tee off Jan. 26 at Torrey Pines

US places up to 8,500 troops on alert for possible deployment to Eastern Europe