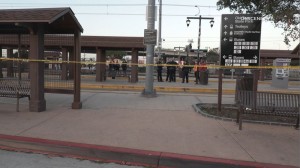 The suspect pushed the man into an oncoming train without provocation, Lt. Andra Brown said.

SAN DIEGO (KUSI) – A man in his 60s was killed Saturday after being pushed into an oncoming train at the Old Town Trolley station, police said.

The incident was reported just after 6:15 a.m. Saturday at the station on 4009 Taylor Street in Old Town, according to Lt. Andra Brown of the San Diego Police Department.

The victim was found by responding officers with apparent trauma to his upper body on the trolley platform, Brown said. He was pronounced dead at 6:23 a.m.

Homicide detectives learned that two men had exited a southbound trolley and were walking on the platform when the suspect pushed the man into an oncoming train without provocation, the lieutenant said. The man struck the side of a passing train, causing his injuries, while the suspect fled the area on foot.

The victim has been identified as Martin Andara, 68, who is a resident of Santee.

Detectives identified the suspect by Tuesday as Ryan Michael Rukstelis, 26, and arrested Rukstelis without incident at 2200 Park Boulevard on Tuesday afternoon.

Rukstelis will be booked into County jail for the murder of Andara, according to an email from Lt. Adam Sharki.