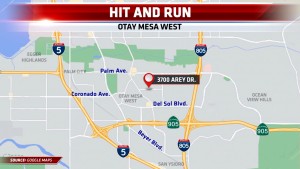 Octavio Mendoza, 40, was riding a bicycle near Silverwing Recreation Center when a vehicle, possibly a light-colored SUV, struck him shortly before 11:30 a.m. last Thursday, according to the San Diego Police Department.

Following the collision in the 3700 block of Arey Drive, the unidentified motorist drove off. Paramedics took Mendoza to a hospital, where he was pronounced dead.

Evidence indicates that the driver ran down the victim on purpose, according to police.

“Detectives do believe the collision was an intentional act, and are investigating the case as a homicide,” Lt. Jud Campbell said.

The lieutenant did not disclose what led police to that conclusion.

Investigators, who have no description of the hit-and-run driver, hope to interview potential witnesses who were at a set of baseball fields near the scene of the fatal crash at the time it occurred, the lieutenant said.

Anyone with information about the case was asked to call San Diego County Crime Stoppers at 888-580-8477 or contact the agency online at sdcrimestoppers.org. Tipsters may remain anonymous and could be eligible for a reward of up to $1,000.