CANTON, Ga. (AP) — A man accused of killing eight people, most of them women of Asian descent, at massage businesses in Georgia has pleaded guilty to four of the murders. 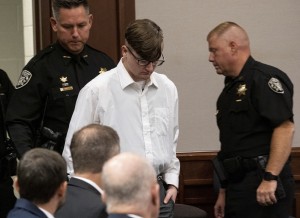 Robert Aaron Long enters Superior Court of Cherokee County in Canton, Ga. on Tuesday, July 27, 2021. Long, accused of killing eight people, most of them women of Asian descent at an Atlanta-area massage businesses pleaded guilty to four of the murders and was handed four sentences of life without parole. (Ben Gray/Atlanta Journal-Constitution via AP, Pool)

Robert Aaron Long was handed four sentences of life without parole on Tuesday in Cherokee County.

He still faces the death penalty in the four other killings, which are being prosecuted in Atlanta.

His shooting spree in March raised fears among Asian Americans. And at Tuesday’s sentencing, a prosecutor said Cherokee County investigators saw no evidence of racial bias.

That’s at odds with the hate crime and domestic terrorism prosecution Long faces in Atlanta.