Man pleads not guilty to murder in DUI crash that killed 2, injured 2 others 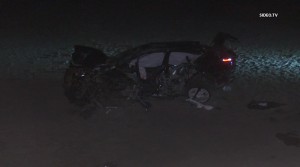 SAN DIEGO (KUSI) – A young man who allegedly drove under the influence and crashed his car in Torrey Pines last month, killing two of his passengers and seriously injuring two others, pleaded not guilty Wednesday to charges that include murder.

Christopher Ray Schmittel, 19, of the Riverside County city of Moreno Valley, is accused of crashing a 2020 Subaru WRX through a guardrail on Torrey Pines Road just before 11 p.m. on April 25, causing the deaths of Joshua Manzanares and Johnny Punzalan, both 19. The victims were thrown from the vehicle and died at the scene, according to police.

Schmittel and two other passengers in the car were hospitalized with serious injuries, police said.

Prosecutors allege Schmittel was driving under the influence of both alcohol and drugs, but have not disclosed what drug or drugs he is accused of using.

The defendant was arrested Sunday at his home and remained in custody without bail following Wednesday afternoon’s arraignment.

He faces up to 30 years to life in state prison if convicted of the second-degree murder counts, plus charges of gross vehicular manslaughter while intoxicated and DUI causing injury.