President Donald Trump threatened Monday to pull the Republican National Convention out of North Carolina if the state’s Democratic governor doesn’t immediately sign off on allowing a full-capacity gathering in August despite the ongoing COVID-19 pandemic.

On Friday, Gov. Roy Cooper moved the state into a second reopening phase by loosening restrictions on hair salons, barbers and restaurants. But he said the state must move cautiously, and he kept indoor entertainment venues, gyms and bars closed.

“Unfortunately, Democrat Governor, @RoyCooperNC is still in Shutdown mood & unable to guarantee that by August we will be allowed… full attendance in the Arena,” Trump tweeted Monday.

He added that Republicans “must be immediately given an answer by the Governor as to whether or not the space will be allowed to be fully occupied. If not, we will be reluctantly forced…to find, with all of the jobs and economic development it brings, another Republican National Convention site.”

Pre-pandemic, the GOP had estimated 50,000 would come to Charlotte for the convention centered around its NBA arena.

Cooper’s office responded that state officials are working with the GOP on convention decisions.

“State health officials are working with the RNC and will review its plans as they make decisions about how to hold the convention in Charlotte,” Cooper spokeswoman Dory MacMillan said in an email. “North Carolina is relying on data and science to protect our state’s public health and safety.”

Calling Trump’s remarks “a very reasonable request,” Pence told Fox that “having a sense now is absolutely essential because of the immense preparations that are involved, and we look forward to working with Governor Cooper, getting a swift response and, if needs be, if needs be, moving the national convention to a state that is farther along on reopening and can say with confidence that we can gather there.”

Changing sites would be difficult for reasons including the contract between GOP officials and Charlotte leaders to hold the convention there. In April, the City Council voted to accept a $50 million federal grant for convention security. Before the vote, City Attorney Patrick Baker noted the overall contract requires parties to follow applicable laws and regulations, including Cooper’s executive orders. Cooper’s current order limits indoor gatherings to 10 people. Baker said then that GOP officials had discussed convention alternatives but did not elaborate.

A week ago, Republican National Committee chairwoman Ronna McDaniel vowed on a call with reporters that the convention slated for Aug. 24-27 would be held at least partly in person.

During a subsequent Charlotte-area visit, Health and Human Services Secretary Alex Azar sounded less certain when discussing convention preparations. He did not refer to a traditional in-person convention as a certainty, but rather noted that “we’re several months away from the possibility of the RNC.” Azar also praised Cooper’s reopening moves.

Before Monday, Cooper and Trump had displayed little friction during the pandemic. While Cooper has urged the federal government to provide more testing supplies and protective gear, he’s avoided criticizing Trump by name. Trump, meanwhile, has largely refrained from calling out Cooper as he has other Democratic governors.

Cooper narrowly beat an incumbent Republican in 2016 while Trump won the state. In this year’s gubernatorial election, Cooper faces Republican Lt. Gov. Dan Forest, who has urged a faster reopening of businesses. 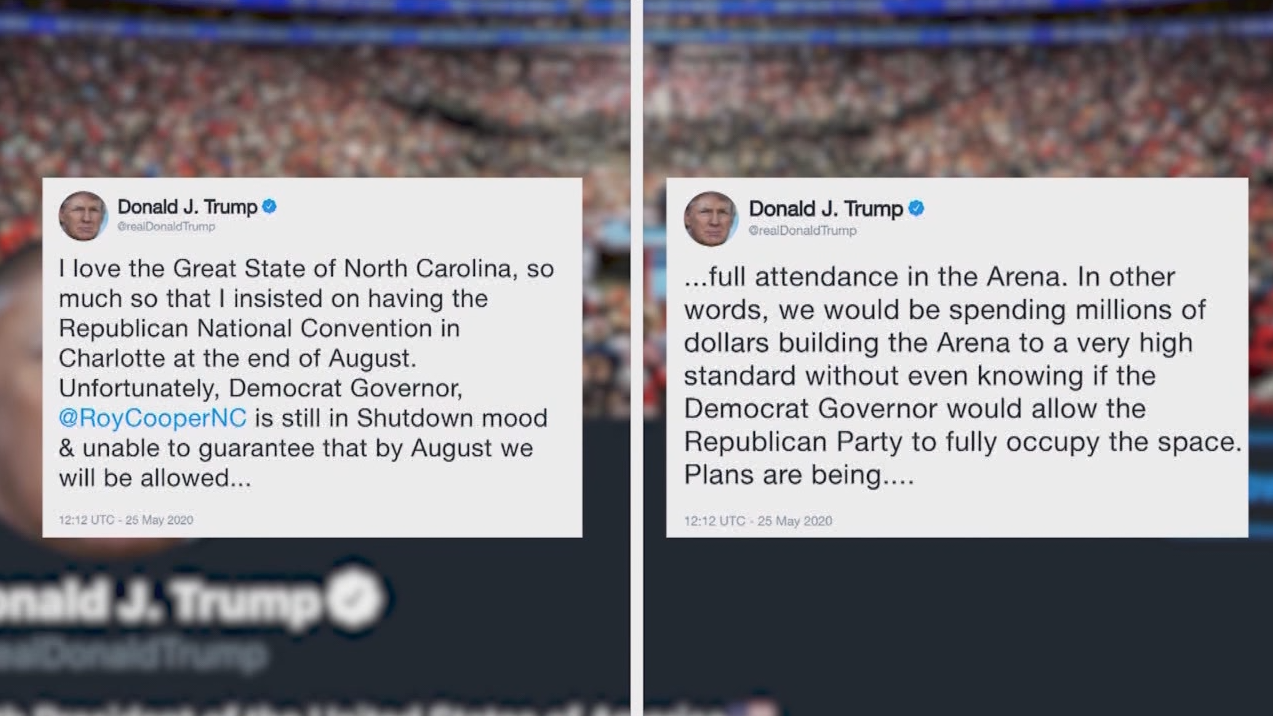