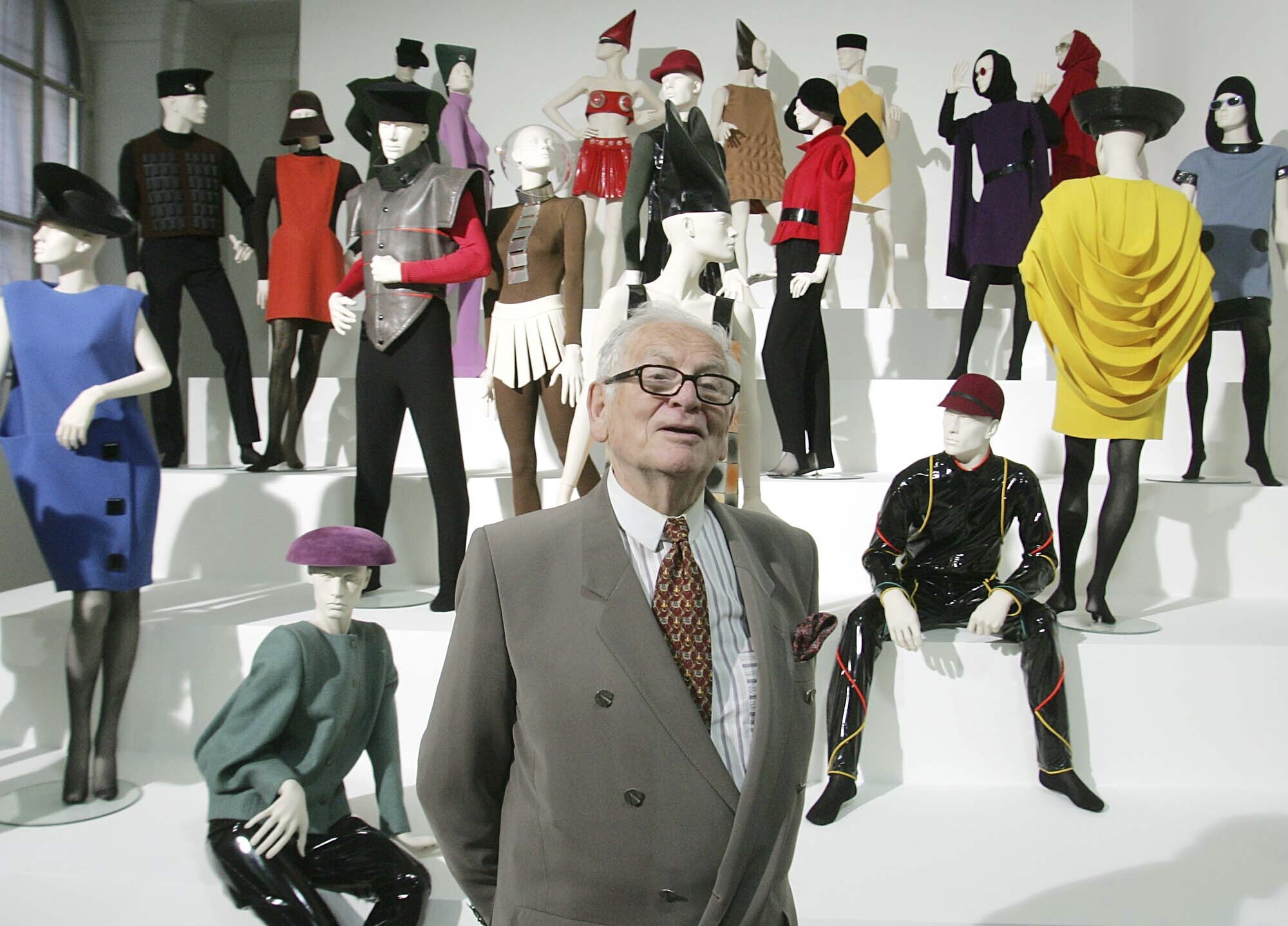 PARIS (AP) — Pierre Cardin, the French designer whose famous name embossed everything from wristwatches to bedsheets after his iconic Space Age styles shot him into the fashion stratosphere in the 1960s, has died, the French Academy of Fine Arts said Tuesday. He was 98.

A licensing maverick, Cardin’s name went on thousands of products and in the brand’s heyday in the 1970s and ’80s, while goods bearing his fancy cursive signature were sold at some 100,000 outlets worldwide.

That number dwindled dramatically in later years, as his products were increasingly regarded as cheaply made and his clothing — which, decades later, remained virtually unchanged from its 60s-era styles — felt almost laughably dated.

A savvy businessman, Cardin used the fabulous wealth that was the fruit of his empire to snap up top-notch properties in Paris, including the Belle Epoque restaurant Maxim’s, which he also frequented.

The Fine Arts Academy announced his death in a tweet Tuesday. He had been among its illustrious members since 1992. The academy did not give a cause of death or say where or when he had died.

At a time when other Paris labels were obsessed with flattering the female form, Cardin’s designs cast the wearer as a sort of glorified hanger, there to showcase the clothes’ sharp shapes and graphic patterns. Destined neither for pragmatists nor for wallflowers, his designs were all about making a big entrance — sometimes very literally.

Gowns and bodysuits in fluorescent spandex were fitted with plastic hoops that stood away from the body at the waist, elbows, wrists and knees. Cardin bubble dresses and capes enveloped their wearers in oversized spheres of fabric. Toques were shaped like flying saucers; bucket hats sheathed models’ entire heads, with cutout windshields at the eyes.

“Fashion is always ridiculous, seen from before or after. But in the moment, it’s marvelous,” Cardin said in a 1970 interview with French television.

Cardin was born on July 7, 1922, in a small town near Venice, Italy, to a modest, working-class family. When he was a child, the family moved to Saint Etienne in central France, where Cardin was schooled and became an apprentice to a tailor at age 14.

Cardin would later embrace his status as a self-made man, saying in the same 1970 interview that going it alone “makes you see life in a much more real way and forces you to take decision and to be courageous.

“It’s much more difficult to enter a dark woods alone than when you already know the way through,” he said.

After moving to Paris, he worked as an assistant in the House of Paquin starting in 1945 and also helped design costumes for the likes of Jean Cocteau. He also was involved in creating the costumes for the director’s 1946 hit, “Beauty and the Beast.”

After working briefly with Elsa Schiaparelli and Christian Dior, Cardin opened his own house in Paris’ tony first district, starting with costumes and masks.

Cardin delivered his first real collection in 1953. Success quickly followed, with the 1954 launch of the celebrated “bubble” dress, which put the label on the map.

Cardin staged his first ready-to-wear show in 1959 at Paris’ Printemps department store, a bold initiative that got him temporarily kicked out of the Chambre Syndicale. Cardin’s relationship with the organization — the governing body of French fashion — was rocky, and he later left of his own volition to stage shows on his own terms.

Cardin’s high-profile relationship with French screen siren Jeanne Moreau, the smoky-voiced blond of “Jules and Jim” fame, also helped boost the brand’s profile. Described by both as a “true love,” the relationship lasted about five years and they never married.

Cardin saw the astronomical expense of producing haute couture collections as an investment. Even though the clothing’s pharaonic prices didn’t cover the cost of crafting the made-to-measure garments, the media coverage generated by his couture shows helped sell lower sticker-price items, like hats, belts and hosiery.

As Cardin’s fame and fortune spiked, so did his real estate portfolio. He long lived an austere, almost monastic existence with his sister in a sprawling apartment across from the Elysee presidential palace in Paris. He bought up so much top-flight real estate in the neighborhood that fashion insiders joked he could have mounted a coup d’etat.

In addition to his women’s and men’s clothing boutiques, Cardin opened a children’s shop, a furniture store and the Espace Cardin, a sprawling hall in central Paris where the designer would later stage fashion shows, as well as plays, ballets and other cultural events.

Beyond clothes, Cardin put his stamp on perfumes, makeup, porcelain, chocolates, a resort in the south of France and even the velvet-walled watering hole Maxim’s — where he could often be seen at lunch.

The 1970s saw a huge Cardin expansion that brought his outlets to more than 100,000, with about as many workers producing under the Cardin label worldwide.

Cardin was in the vanguard of recognizing the importance of Asia to the fashion world, both as a manufacturing hub and for its consumer potential. He was present in Japan starting in the early ’60s and in 1979 became the first Western designer to stage a fashion show in China.

In 1986, he inked a deal with Soviet authorities to open a showroom in the Communist nation to sell clothes locally made under his label.

In his later life, with no heir apparent, Cardin dismantled parts of his vast empire, selling dozens of his Chinese licenses to two local firms in 2009.

Two years later, he told the Wall Street Journal that he’d be willing to sell his entire company — made up at that point of an estimated 500-600 licenses — for $1.4 billion.