The rideshare companies recently lost a court battle regarding Assembly Bill 5, with a judge ruling the companies must classify their drivers as employees rather than independent contractors in order to comply with the law, which went into effect Jan. 1

We are urging action to avoid Uber and Lyft leaving California on Friday.

As the Republican and Democratic mayors of two of California's largest cities, we're calling for solutions so our state doesn’t shut down an industry that's vital to the income and livelihood of millions. pic.twitter.com/J1mctxPyO0

San Francisco-based Judge Ethan P. Schulman ruled in favor of California Attorney General Xavier Becerra, and the city attorneys of San Diego, Los Angeles and San Francisco in their lawsuit alleging Uber and Lyft have misclassified their drivers, preventing them from receiving “the compensation and benefits they have earned through the dignity of their labor” such as the right to minimum wage, sick leave, unemployment insurance and workers’ compensation benefits.

Schulman stayed his Aug. 10 ruling for 10 days to allow the companies time to appeal. 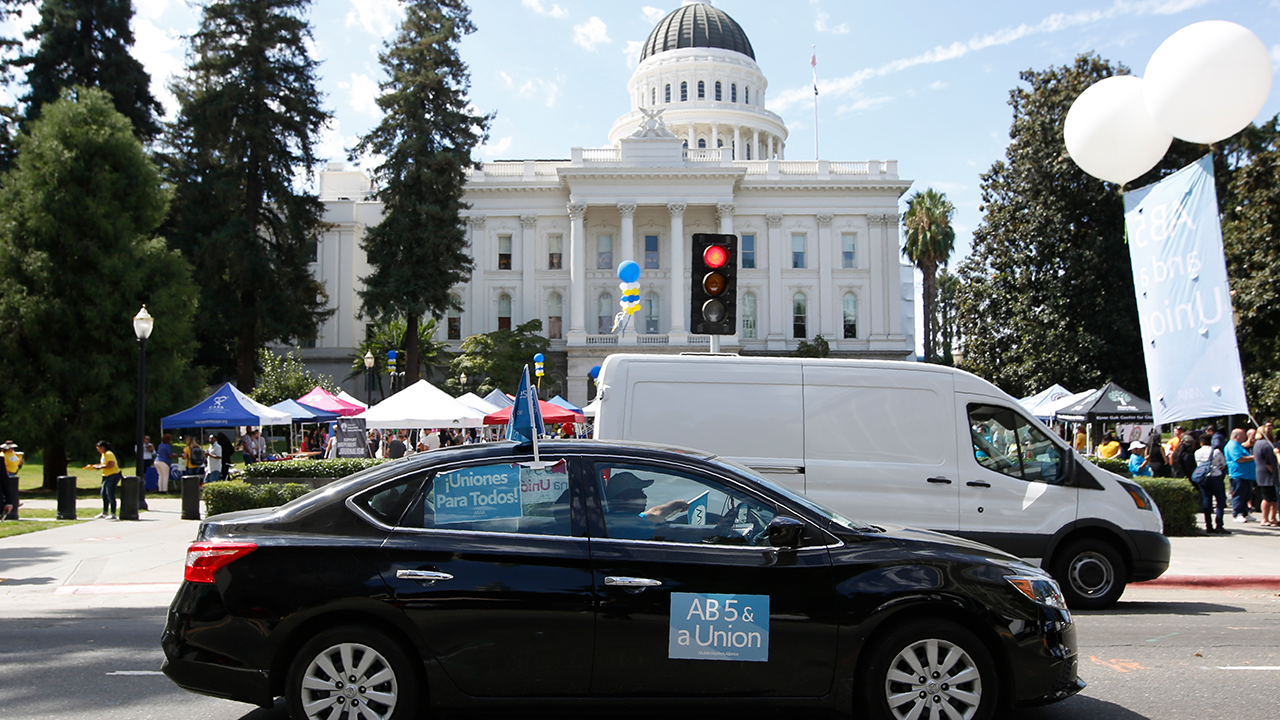 In this Aug. 28, 2019 file photo supporters of a measure to limit when companies can label workers as independent contractors circle the Capitol during a rally in Sacramento, Calif. U.S. District Judge Dolly Gee denied a request by ride-share company Uber and on-demand a request delivery service Postmates for a preliminary injunction protecting them from the new law aimed at giving protections to people who work as independent contractors, Monday, Feb.10, 2020. (AP Photo/Rich Pedroncelli, File)

Both companies have stated that if their appeals are unsuccessful, they may shut down operations in California as they would not be able to rapidly restructure their operations in order to comply with AB5.

Faulconer and Liccardo’s joint statement called for a stay on the injunction, citing economic impacts to California’s gig workers, and a loss of transportation options and delivery services for critical resources like food and medical care for California residents.

“This sudden disappearance of jobs and transportation options will only deepen the economic pain felt in our communities during this historic pandemic and recession,” the statement read.

The mayors said a stay could allow state leaders and the companies time to craft “a resolution to this complex issue and avoid irreparable harm upon hundreds of thousands of residents whose lives and livelihoods daily depend on these services.”

Faulconer and Liccardo also proposed the creation of a portable benefit fund for independent contractors that the companies would be required to pay into.

“Being forced into a situation where shutting down service is the only viable option hurts everyone at a moment when we need to pull together to help more Californians make ends meet,” the mayors said. “We call on all parties to turn this political standoff into a foundation for productive conversation about new ways to preserve a valued service and fairly compensate independent workers. California can choose to continue to implement solutions that lead the innovation economy, or to be led by others. The livelihoods of nearly one million residents depends on California choosing to lead.”

Uber and Lyft are also working to combat AB5 by sponsoring Proposition 22, a ballot initiative that, if approved by voters in November, would allow rideshare drivers to work as independent contractors.

RELATED STORY: Uber CEO says ride-sharing service may be forced to shut down in California because of AB 5

Falling Sky Pottery reopens after being closed due to COVID-19