SAN DIEGO (KUSI) — Military authorities Thursday released the names of four Miramar-based Marines who died in a helicopter crash this week while taking part in training exercises in Imperial County.

The servicemen were aboard a CH-53E Super Stallion that went down for unknown reasons roughly 15 miles west of El Centro about 2:30 p.m. Tuesday, according to 3rd MAW public affairs. 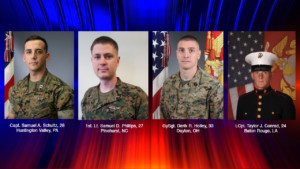 Killed in the crash were Capt. Samuel A. Schultz of Huntington Valley, Pennsylvania, and 1st Lt. Samuel D. Phillips of Pinehurst, North Carolina, both of whom were pilots; and crew chiefs Lance Cpl. Taylor J. Conrad of Baton Rouge, Louisiana, and Gunnery Sgt. Derik R. Holley of Dayton, Ohio.

The cause of the accident remains under investigation.

“The loss of our Marines weighs heavy on our hearts,” said Maj. Gen. Mark Wise, commanding general of 3rd MAW. “Our priority is to provide support for our families and HMH-465 during this critical time.”

Holley, 33, enlisted in the Marines in November 2003 and deployed to Iraq twice in support of Operation Iraqi Freedom, to Japan as part of the Unit Deployment Program and with the 15th Marine Expeditionary Unit.

Schultz, 28, joined the Marine Corps in May 2012 and had deployed with the 11th Marine Expeditionary Unit.

“The hardest part of being a Marine is the tragic loss of life of a fellow brother-in-arms. … These warhorse Marines brought joy and laughter to so many around them,” said Col. Craig Leflore, commanding officer of Marine Aircraft Group 16. “They each served honorably, wore the uniform proudly and were a perfect example of what makes our Marine Corps great — its people. They will forever be in our hearts and minds.”