Scott was in the same deployment as Edward Gallagher in Mosul and had heard radio chatter about an ISIS prisoner. Scott said he arrived on scene, 2 medics already there, Gallagher and Burn. Scott said the prisoner was ‘unconscious but breathing normally with a wound on his leg.” Someone had already performed a tracheotomy, a tube was in his neck.  Scott said Burn left the scene and Scott saw “Gallagher pull out his knife and stab the ISIS prisoner underneath the collar bone at least once.” He said he did not see any blood.

Scott froze, was not sure what to do, said he “stayed with the prisoner until he asphyxiated.” 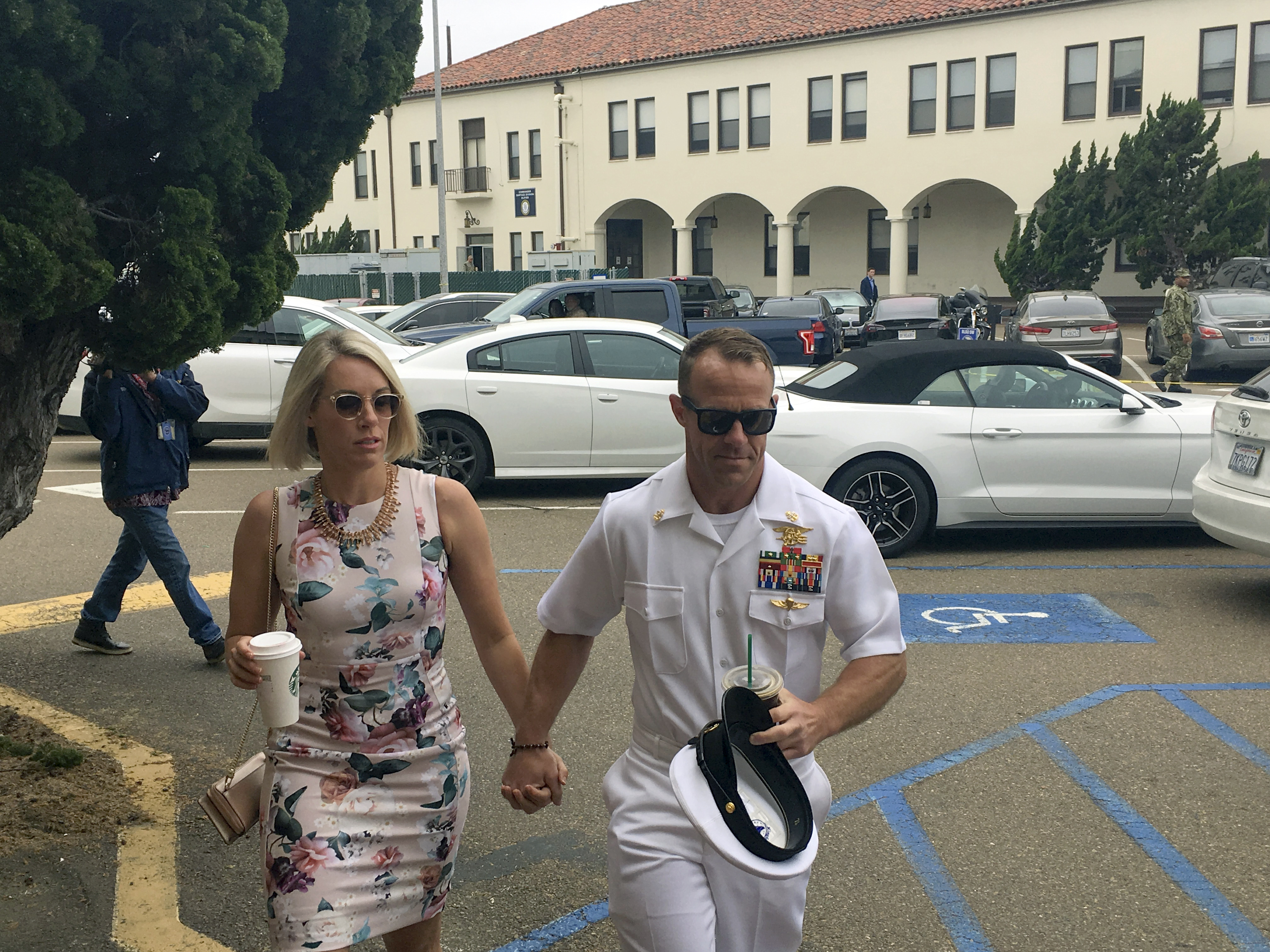 Navy Special Operations Chief Edward Gallagher, right, walks with his wife, Andrea Gallagher, as they arrive to military court on Naval Base San Diego, Thursday, June 20, 2019, in San Diego. More former SEALs were expected to testify on Thursday in the case against Gallagher, who has pleaded not guilty to murder and attempted murder stemming from his 2017 tour of duty in Iraq. (AP Photo/Julie Watson)

Prosecution cross-examined Scott. He told the prosecution that he never saw any blood after the stabbing. Lawyers asked about asphyxiation and how that happened. Scott said, “I suffocated him. I held my thumb over his trach tube until he asphyxiated.” Prosecution asked “Did Gallagher kill this ISIS terrorist?” Scott answered “no.” Prosecution asked “why did you kill him?” and Scott replied, “Because I knew he was going to die anyway.” Prosecution said, he was a prisoner of the Iraqi forces, not the US forces, so US would treat the prisoner and hand him over. Scott justified that the prisoner was going to be taken to the Iraqis as a prisoner and expressed concern because he said they torture their prisoners.

Scott was not concerned by what Gallagher did to the prisoner, only what the Iraqis would do.

During prosecution re-direct, Scott testified that in none of the previous interviews with NCIS or prosecution, did he say that he asphyxiated the prisoner.

The defense said, “Did nobody ever ask you what you meant by asphyxiation?” with no follow up; Scott answered no. Defense attorney asked “you had a motivation not to tell the NCIS the whole truth, correct?” Scott agreed, “Correct.” He said he didn’t want to see an innocent man go to jail, Gallagher has a wife and a family.

Scott finished his testimony this morning.

The defense has said Gallagher only treated the prisoner for a collapsed lung and that disgruntled sailors fabricated the murder accusations because he was a demanding leader and they didn’t want him promoted.

Gallagher’s case has drawn the attention of President Donald Trump, who ordered him moved from the brig to Navy hospital earlier this year and is reportedly considering a pardon.

The case has been mired with news leaks of investigative documents that are under court order only to be shared among lawyers.

The judge recently removed the lead prosecutor from the case over a bungled effort to track emails sent to defense lawyers in order to find the source of the leaks.

Rugh determined that the effort, which was quickly discovered by the defense, violated Gallagher’s constitutional rights against illegal searches and the right to counsel by interfering with attorney-client privilege.

He declined to dismiss the case but freed Gallagher, reduced the maximum possible punishment from life in prison without parole to the possibility of parole, and made it easier for the defense to get a more favorable jury.

The seven-man jury is made up of five Marines and two sailors — all veterans of war zones. A two-thirds majority — at least five — is needed to convict. Anything less ends in acquittal.

The Latest: Fauci: Prep on vaccine variant upgrade has begun