WASHINGTON (AP) — The financial condition of the government’s bedrock retirement programs for middle- and working-class Americans remains shaky, with Medicare pointed toward insolvency by 2026, according to a report Monday by the government’s overseers of Medicare and Social Security.

It paints a sobering picture of the programs, though it’s relatively unchanged from last year’s update. Social Security would become insolvent in 2035, one year later than previously estimated.

Both programs will need to eventually be addressed to avert automatic cuts should their trust funds run dry. Neither President Donald Trump nor Capitol Hill’s warring factions has put political perilous cost curbs on their to-do list. 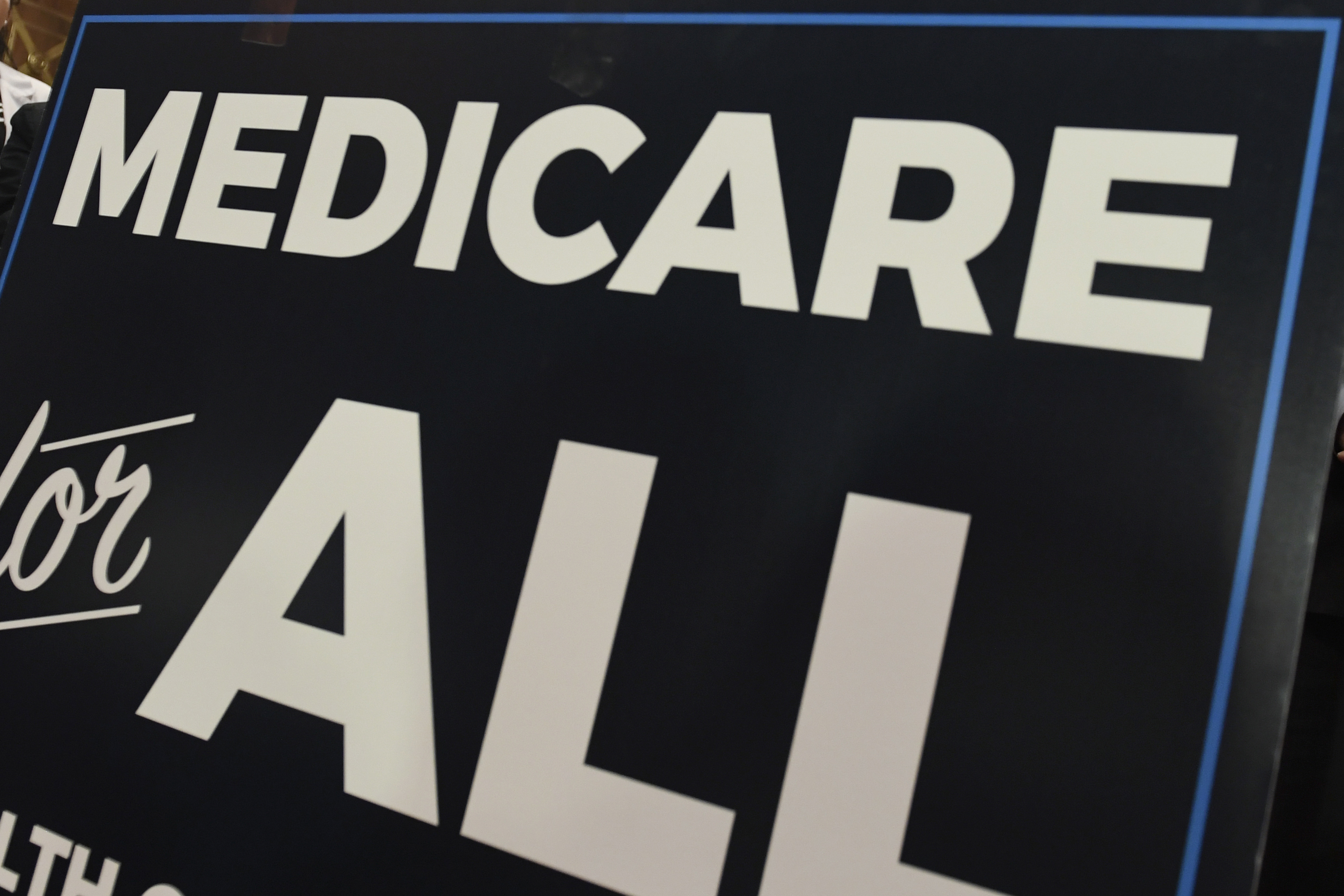 In this April 10, 2019 file photo, a sign is shown during a news conference to reintroduce “Medicare for All” legislation, on Capitol Hill in Washington. The financial condition of the government’s bedrock retirement programs for middle- and working-class Americans remain shaky, with Medicare pointed toward insolvency by 2026. That’s the word from the latest report by the government’s overseers of Medicare and Social Security, which paints a sobering picture of the programs, though it’s relatively unchanged from last year’s update. Social Security would become insolvent in 2035, one year later than previously estimated. (AP Photo/Susan Walsh)

The report is the latest update of the government’s troubled fiscal picture. It lands in a capital that has proven chronically unable to address it. Trump has declared benefit cuts to the nation’s signature retirement programs off limits and many Democratic presidential candidates are calling for expanding Medicare benefits rather than addressing the program’s worsening finances.

Many on both sides actually agree that it would be better for Washington to act sooner rather than later to shore up the programs rather than wait until they are on the brink of insolvency and have to weigh more drastic steps.

“The programs that millions of Americans pay into and expect to have in the future are going broke — driving up federal spending, growing our deficits, and crowding out other priorities in the process. We cannot afford to ignore this reality any longer,” said Arkansas Rep. Steve Womack, ranking Republican on the Budget Committee.

But potential cuts such as curbing inflationary increases for Social Security, hiking payroll taxes, or raising the Medicare retirement age are so politically freighted and toxic that Washington’s power players are mostly ignoring the problem.

Later this year, Social Security is expected to declare a 1.8% cost-of-living increase for 2020 based on current trends, program officials say.

Monday’s report by three Cabinet heads and Social Security’s acting commissioner, urges lawmakers to “take action sooner rather than later to address these shortfalls, so that a broader range of solutions can be considered and more time will be available to phase in changes while giving the public adequate time to prepare.”

If Congress doesn’t act, both programs would eventually be unable to cover the full cost of promised benefits. With Social Security that could mean automatic benefit cuts for most retirees, many of whom depend on the program to cover basic living costs.

For Medicare, it could mean that hospitals, nursing homes, and other medical providers would be paid only part of their agreed-upon fees.

In a glimmer of good news, Social Security’s disability program is now estimated to remain solvent for an additional 20 years, through 2052. Overall, however, Social Security would run out of reserves by 2035, one year later than projected in last year’s report.

“We remain committed to further bolstering the programs’ finances, which will benefit from the long-term growth we will see as a result of the Administration’s economic policies,” said Treasury Secretary Steven Mnuchin.

As an indication of Medicare’s woes, it would take a payroll tax increase of 0.91 percentage points to fully address its shortfall or a 19% cut in spending. Medicare’s problems are considered more difficult to solve, as health care costs regularly outpace inflation and economic growth.

Taken together, the two programs combined for 45% of the federal budget, excluding interest payments on the national debt.