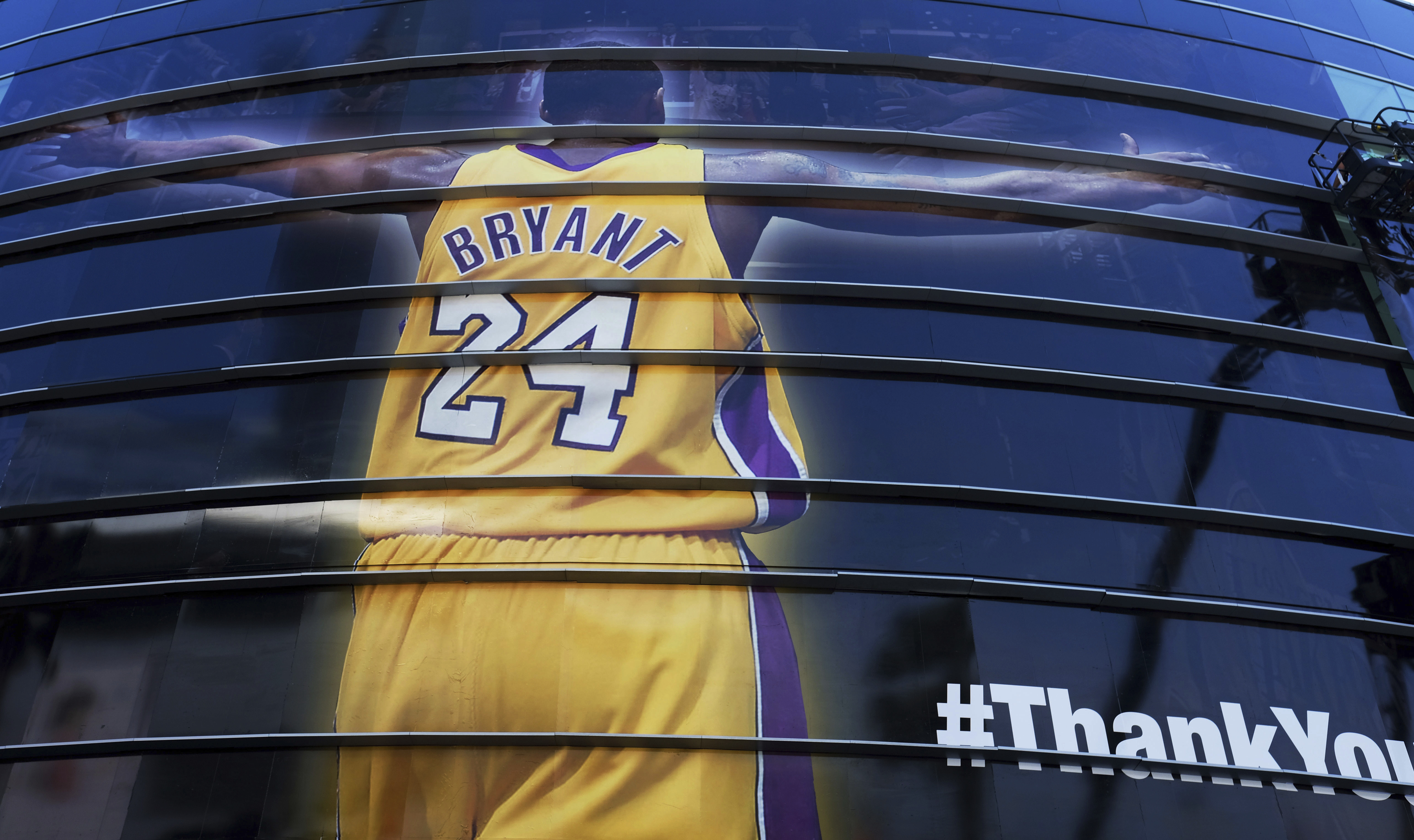 FILE – In this April 13, 2016 file photo a giant banner congratulating Kobe Bryant is draped around Staples Center before his last NBA basketball game, a contest against the Utah Jazz, in downtown Los Angeles. Bryant, a five-time NBA champion and a two-time Olympic gold medalist, died in a helicopter crash in California on Sunday, Jan. 26, 2020. He was 41. (AP Photo/Richard Vogel, file)

LOS ANGELES (KUSI) – The official memorial ceremony for former Los Angeles Lakers star Kobe Bryant and his daughter, Gianna, will begin at 10 a.m. Monday at Staples Center, and organizers have urged people without tickets to stay away from the arena.

“We hope that everybody heeds the message and they stay either in their offices, surrounded by their friends or at home with their family or loved ones, because it’s going to be a very emotional memorial for that day and we want people to be able to enjoy it,” Staples Center President Lee Zeidman told reporters outside the venue.

Bryant and Gianna were killed along with seven other people in a helicopter crash in Calabasas on Jan. 26.

Zeidman and Los Angeles Police Department Chief Michel Moore on Friday stressed that the ceremony will not be broadcast on any of the outdoor screens at Staples Center or in the adjacent L.A. Live plaza.

“This is, to be clear, a ticketed worldwide event at this location,” Moore said. “And what that means is, if you don’t have tickets and credentials, you will not be allowed into this venue. … The point there is, do not impact the rest of the Los Angeles downtown community by trying to come here and be part of something that you’ll not be a part of.”

Moore and Zeidman said they do not anticipate issues of people trying to “crash” the event or cause a disturbance, with both saying the public has shown the utmost respect in the weeks following the helicopter crash that killed Bryant, 41, Gianna, 13, and seven others.

Along with Bryant and his daughter, also killed in the crash were:

— John Altobelli, 56, longtime coach of the Orange Coast College baseball team, along with his wife, Keri, 46, and their 13-year-old daughter Alyssa, who was a teammate of Gianna on Bryant’s Mamba Sports Academy basketball team;

— Sarah Chester, 45, and her 13-year-old daughter Payton, who also played with Gianna and Alyssa;

— Christina Mauser, 38, one of Bryant’s assistant coaches on the Mamba Academy team; and

Zeidman noted that as many as 350,000 people visited a massive memorial that grew outside Staples Center in the days after the crash, without any incidents.

Major streets — such as Pico and Olympic boulevards — near the arena will remain open, but smaller streets outside Staples Center and L.A. Live will be blocked off and accessible only to people with tickets.

Zeidman said he had no details about how many tickets were purchased by fans, but 20,000 seats were made available in the arena. Doors to Staples Center will open at 8 a.m., and he urged everyone with tickets to be in their seats by 9:45 a.m.

Zeidman also said he had no information on who will be speaking at the memorial.

“Right now, it’s a very fluid situation,” he said. “The family and the Los Angeles Lakers are reaching out to people that would like to be part of this. We have no insight to exactly what they’re going to do, outside of we know that we’re going to have 20,000 seats in that building ready to do whatever they want to do from a sound, LED or memorial standpoint.”

Ticket prices for the memorial ranged from $24.02 to $224. The ticket prices, along with the date of the event, are all in recognition of Bryant’s jersey number, 24, and Gianna’s number 2.

All proceeds from the ticket sales will be donated to the Mamba and Mambacita Sports Foundation.

The tickets are non-transferable, meaning anyone entering the arena must enter with the purchaser of the tickets.

Pacific Park on the Santa Monica Pier will honor Bryant on its 90-foot- tall Ferris Wheel by featuring “LA (loves) 24” and “LA (loves) 8” along with displays of gold and purple colors in a variety of patterns and transitions, from sunset to midnight Monday.

And LAX tweeted Sunday that its pylons “will once again be lit in purple and gold tonight and tomorrow evening as the city and fans around the world mourn this terrible loss of life.”

US gig workers and self-employed face delays in jobless aid