Memorial Day weekend a new test for California in pandemic 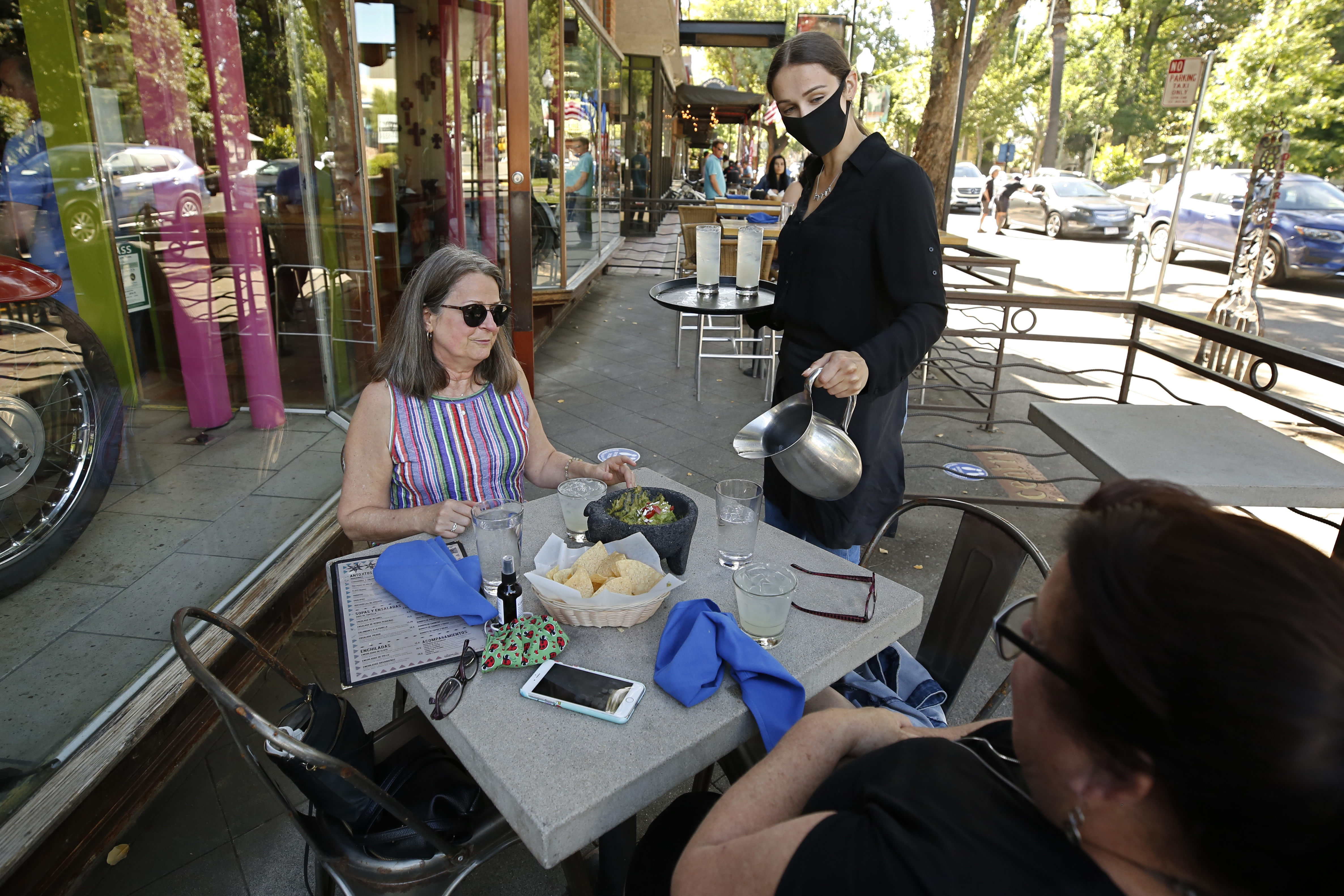 Delaney Thayer wears a face mask as she serves diners Jennifer Allen, left, and Julie Steacy at Centro Cocina Mexicana restaurant in Sacramento, Calif., Friday, May 22, 2020. As part of Sacramento County’s extended Stage 2 reopening plan, dine-in restaurants and retail stores were allowed to open at noon Friday after being closed for several months due to the coronavirus pandemic. (AP Photo/Rich Pedroncelli)

LOS ANGELES (AP) — Californians entered the Memorial Day weekend with newly expanded options for beachgoing, barbecue and, of course, retail therapy as stay-at-home restrictions eased across much of the state.

Some 45 of 58 counties have received permission to reopen most stores — at least for curbside pickups — and many public spaces by meeting state standards for controlling the coronavirus.

Some saw it as a safety test as the state prepared to celebrate its first major holiday weekend since a statewide order in mid-March clamped down on all but essential trips and businesses.

Social distancing practices have been cited as the main reason rates of deaths and hospitalizations have slowed in many counties, and people were urged to keep their masks on and their guard up while enjoying recently reopened bike paths, hiking trails and beaches.

Many Southern California beaches were open only for swimming, running and other activities. Sunbathing and group activites such as volleyball were prohibited.

Police, lifeguards and other officials were warning people to not forget about the seriousness of the virus as they enjoy their newfound freedom.

“Don’t go crazy and stay out all weekend. Don’t get as close as you can to as many people,” Los Angeles Mayor Eric Garcetti said. “Don’t go out without a mask. You see people without masks, avoid them.”

“It’s also something that just saves more lives, including, perhaps, your own,” he said.

For most people, the new coronavirus causes mild or moderate symptoms, such as fever and cough that clear up in two to three weeks. For some, especially older adults and people with existing health problems, it can cause more severe illness, including pneumonia and death.

Los Angeles County, the state’s largest with 10 million people, has been hardest-hit by COVID-19, with more than 43,000 cases and well over 2,000 deaths. However, hospitalization and other figures show progress in slowing the spread of infections, health officials said, and Garcetti announced Friday that the Venice Beach bike path was reopening.

Dozens of counties also got the go-ahead to allow some restaurants, which have survived on deliveries and takeout orders, to reopen limited seating.

“I think people are going to be so happy to be able to go back out and not eat out of a plastic container or cardboard box,” said David Spatafore, who owns the Blue Bridge Hospitality restaurant group. “I know I am. I’m over the compost-able clam shell.”

The state is still seeing troubling COVID-19 flare-ups, however. Imperial County, across the border from Mexico, has seen a surge. In Northern California, Santa Cruz County’s public health officials were investigating four separate clusters of COVID-19 cases involving family gatherings, including a multi-generational Mother’s Day party and a large gathering involving individuals who traveled from out-of-state.

Avoiding temptation might be difficult, however, with forecasts calling for temperatures to heat up over the weekend, reaching into the 90s and even 100 degrees in some inland valleys by Sunday.

On Friday, George Cruz relaxed at an outdoor beach restaurant in San Diego as a waitress wearing a face covering rushed by, carrying a tray with a pina colada in a pineapple-shaped cup. An employee in a face covering stood nearby with cleaning supplies in his gloved hand, ready to sanitize any empty tables.

The odd mix of pumping music, cocktails and health precautions did not seem to deter anyone. Beach House Grill — known for its ocean views and fire pits — was already filling up on a sunny afternoon less than 24 hours after San Diego County was given permission by the state to allow dine-in restaurant service.

Cruz could only imagine the crowds over the holiday weekend.

“That’s why we decided to come now,” said the engineer, who was dining with his wife and 6-year-old daughter. The family planned to stay home.

“There definitely will be a surplus of people at the beach,” he said. “I just hope everybody is smart about how they go out.”

In San Francisco, officials drew large chalk “social distancing” circles on the grass at parks to show people where to sit. Dolores Park has seen large masses of people on sunny weekends, prompting Mayor London Breed to warn that she would shut it down if people weren’t more responsible.

But South Lake Tahoe in the northern Sierra Nevada and Mammoth Lakes in the Eastern Sierra urged non-residents to stay away, concerned that swarms of tourists might spur more COVID-19 cases and overwhelm their medical systems.

“We would love nothing more than to welcome everyone to Tahoe right now, but that’s not the safest way to bring people back,” City Manager Joe Irvin said in a statement. “We need to be responsible and make sure we are doing our part to keep our neighbors safe and Tahoe safe.”

The Santa Cruz County Sheriff’s Office warned that its beaches would be closed except for a few hours in the morning and strongly discouraged tourism from the San Francisco Bay Area, Central Valley and Sacramento areas.

North of San Francisco, Humboldt County, home to several parks with majestic redwood trees, was open for residents only.

“Do not travel into our county,” Sheriff William Honsal said in a video Thursday. “People want to come here, find relief because the temperatures are rising in the valley, coming to the coast, coming to the beach. We ask those people that are from another county to please stay in your county.”