OCEANSIDE (KUSI) – A memorial was held Saturday for a 13-year-old student that died suddenly at Madison Middle School in Oceanside.

Eighth grader Marco Antonio Benitez was said to have fallen ill while attending school on Oct. 22.

According to the Vista Unified School District, Benitez fainted and collapsed while playing soccer during physical education at school.

He was transported to the hospital where he later died.

His mother said that Benitez was a healthy teenager.

However, according to the coroner’s medical report, he had a heart condition that had previously gone undetected.

The “Celebration of Life” was held from 2 p.m. to 7 p.m. at Mance Buchanon Park in Oceanside.

A GoFundMe has been set up to help cover the costs of the funeral.

Organizers of his GoFundMe described Benitez as “a healthy happy 13 year old middle school student” and “a loving brother, son, nephew, and grandson.”

“Nobody could have expected this tragedy,” they wrote. 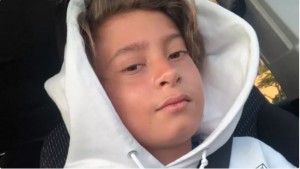 Marco Antonio Benitez died suddenly after collapsing during physical education class at Madison Middle School in Oceanside. He had a heart condition that had previously gone undetected.