“Mighty Oak” Director, Sean McNamara, discussed the making of the film and where you can go see it with KUSI’s Paul Rudy on Good Morning San Diego.

Paramount ViacomCBS published the following press release about the film:

Paramount ViacomCBS has acquired “Mighty Oak” for a theatrical release June 5th, 2020 in select theaters nationwide. The studio plans to open the film in drive-ins and roll out to more theaters as venues are deemed safe.

A few years ago, eight-year-old music prodigy, Tommy Ragen, wrote an extraordinary rock ballad entitled “Chasing”. That song inspired the script for “Mighty Oak” – a story that would attract several rock legends as well as bonafide music royalty. From the beginning, the music-centric story of “Mighty Oak” was set in the tiny beach town of Ocean Beach, California. When Sean McNamara (Raise Your Voice, Soul Surfer) read the Matt Allen’s (Four Christmases) script and listened to Tommy’s music, he knew he had to direct the film. It wasn’t just the uplifting spiritual message or infectious beats that spoke to him. It was something more. Sean, a former rock guitarist and touring musician himself, had played in some of the very same venues featured in the script – in Ocean Beach. Janel Parrish (Pretty Little Liars, To All The Boy I’ve Loved Before) leads a diverse cast that includes Raven-Symoné (That’s So Raven, Dr. Doolittle) Alexa PenaVega (Spy Kids, Nashville), Carlos PenaVega (Spare Parts, Life Sentence), Nana Ghana (What/If, White Rabbit) and Rodney Hicks (Rent, Come From Away), Levi Dylan (12 Mighty Orphans), Gianna Harris (Andrew Lloyd Webber’s School of Rock Broadway Musical) and Ben Milliken (Bosch, Blue crush 2). And yes, Levi Dylan is the grandson of music royalty Bob Dylan and the son of Jakob Dylan (The Wallflowers, Echo in The Canyon).

The film also introduces an 11-year-old guitar prodigy and songwriter, Tommy Ragen (School Of Rock Musical Broadway/National Tour) in the title role. The Brookwell/McNamara production tells the story of a band manager, Gina Jackson (Parrish), who struggles after losing her lead singer/brother (Dylan) in a fatal car accident while traveling to a gig. A decade later, Gina meets a 10-year-old music prodigy named Oak who seems to possess the same qualities as her late brother, Vaughn. Invigorated, Gina starts to pull her life back together as she tries to reunite the band with Oak as its new frontman. But her friends and bandmates become concerned when Gina insists that Oak is the reincarnation of her deceased brother.
From the beginning, the music featured in Mighty Oak is what guided it’s soul.

Later, as editing began, Julia Michaels, the incomparable music supervisor of “A Star Is Born” and the “Pitch Perfect” films listened to Tommy’s songs, watched a rough cut, and was immediately inspired to jump on board. She knew she had to be a part of this, and wanted to ensure the film’s soundtrack was epic.

At the exact same time, Coldplay’s Chris Martin was writing a rock ballad with his twelve-year-old son, Moses. That song became the Coldplay hit entitled “Orphans.” It blended perfectly with Tommy Ragen’s “Chasing”. After seeing the film, Coldplay gladly approved “Mighty Oak” to be the first film to use this song. McNamara and Allen, who collaborated previously on Soul Surfer, describe their latest film as a dramedy in the vein of “Wonder” and “A Dog’s Purpose” set in San Diego’s Ocean Beach music scene. 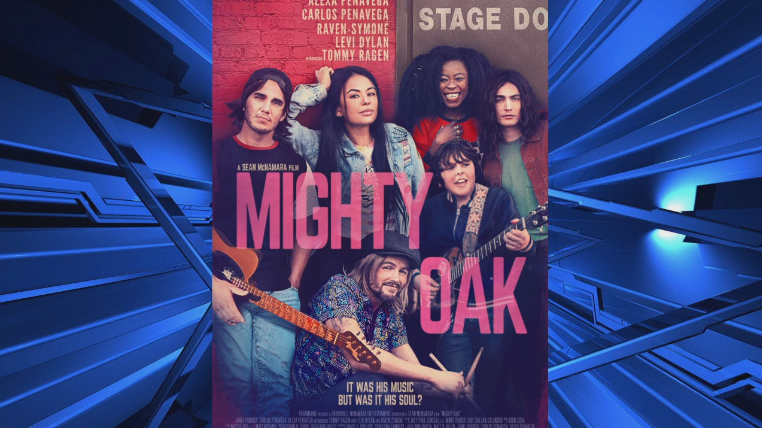