(AP) – The Biden administration is holding tens of thousands of asylum-seeking children in an opaque network of some 200 facilities that The Associated Press has learned spans two dozen states and includes five shelters with more than 1,000 children packed inside.

Confidential data obtained by the AP shows the number of migrant children in government custody more than doubled in the past two months, and this week the federal government was housing around 21,000 kids, from toddlers to teens. A facility at Fort Bliss, a U.S. Army post in El Paso, Texas, had more than 4,500 children as of Monday. Attorneys, advocates and mental health experts say that while some shelters are safe and provide adequate care, others are endangering children’s health and safety.

“It’s almost like ‘Groundhog Day,’” said Southern Poverty Law Center attorney Luz Lopez, referring to the 1993 film in which events appear to be continually repeating. “Here we are back to a point almost where we started, where the government is using taxpayer money to build large holding facilities … for children instead of using that money to find ways to more quickly reunite children with their sponsors.”

A U.S. Department of Health and Human Services spokesman, Mark Weber, said the agency’s staff and contractors are working hard to keep children in their custody safe and healthy.

A few of the current practices are the same as those that President Joe Biden and others criticized under the Trump administration, including not vetting some caregivers with full FBI fingerprint background checks. At the same time, court records show the Biden administration is working to settle several multimillion-dollar lawsuits that claim migrant children were abused in shelters under President Donald Trump.

In a recent news release, the administration touted its “restoration of a child centered focus for unaccompanied children,” and it has been sharing daily totals of the number of children in custody as well as a few photos of the facilities. This reflects a higher level of transparency than the Trump administration. In addition, the amount of time children spend, on average, inside the system has dropped from four months last fall to less than a month this spring, according to the Department of Health and Human Services.

Nonetheless, the agency has received reports of abuse that resulted in a handful of contract staffers being dismissed from working at the emergency sites this year, according to an official who wasn’t authorized to talk about it publicly and insisted on anonymity.

Attorneys say sometimes, even parents can’t figure out where their children are.

José, a father who fled El Salvador after his village was targeted in a massacre, said he requested asylum in the U.S. four years ago. He had hoped to welcome his wife and 8-year-old daughter to California this year, but the pair were turned around at the border in March and expelled to Mexico. The little girl crossed again by herself and was placed in the government shelter in Brownsville, Texas, on April 6. José called a government hotline set up for parents seeking their migrant children repeatedly but said no one would tell him where she was. 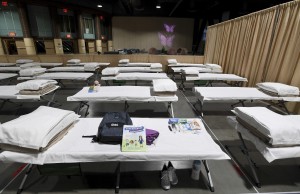 FILE – In this April 22, 2021 file photo, a sleeping area set up inside exhibit hall B of the Long Beach Convention Center in Long Beach, Calif., where migrant children found at the U.S.-Mexico border without a parent will be temporarily housed. The Biden administration is holding tens of thousands of asylum-seeking children in an opaque network of some 200 facilities that The Associated Press has now learned spans two dozen states and includes five shelters with more than 1,000 children packed inside. (Brittany Murray/The Orange County Register via AP, Pool, File)

“I was so upset because I kept calling and calling and no one would tell me any information about where she was,” said José, who asked to be identified only by his first name out of fear of endangering his immigration case. “Finally they told me I had to pay $1,300 to cover her airplane ticket and if I didn’t pay, I would have to wait a month more, and I was so anxious.”

For nearly three weeks, his daughter was held inside the Brownsville facility before finally being released to him in late April after an advocacy organization intervened to get the government to pay for her airfare, as is required by the agency.

Of particular concern to advocates are mass shelters, with hundreds of beds apiece. These facilities can leave children isolated, less supervised and without basic services. The AP found about half of all migrant children detained in the U.S. are sleeping in shelters with more than 1,000 other children. More than 17,650 are in facilities with 100 or more children. Some shelters and foster programs are small, little more than a house with a handful of kids. A large Houston facility abruptly closed last month after it was revealed that children were being given plastic bags instead of access to restrooms.

“HHS has worked as swiftly as possible to increase bed capacity and to ensure potential sponsors can provide a safe home while the child goes through their immigration proceedings,” Weber said in a statement.

“The system has been very dysfunctional, and it’s getting worse,” said Amy Cohen, a child psychiatrist and executive director of the nonprofit Every. Last. One., which works to help immigrant families fleeing violence in Central America. Although there have been large numbers of children arriving in the U.S. for years, Cohen said she’s never seen the situation as bad as it is today.

One reason so many children are now arriving without their parents dates back to a 2020 Trump administration emergency order that essentially closed the U.S.-Mexico border to all migrants, citing public health concerns about spreading COVID-19.

Some of the facilities now holding children are run by contractors already facing lawsuits claiming that children were physically and sexually abused in their shelters under the Trump administration, while others are new companies with little or no experience working with migrant children. Collectively, the emergency facilities can accommodate nearly 18,000 children, according to data the agency provided earlier this month.

Administration officials have said that the increased need has driven them to expand the number of beds available for migrant children and that sheltering children in large facilities, while not preferable, is a better alternative than holding them for long periods at Border Patrol stations.

As for the 8-year-old girl, her father, José, said she is adjusting to life in Los Angeles, enjoying playing with her older brother and, bit by bit, opening up.

“Soon I hope she’ll tell me what it was like inside,” he said.