However, warnings about growing radicalism in the island nation off the coast of India date to at least 2007, while Muslim leaders say their repeated warnings about the group and its leader drew no visible reaction from officials responsible for public security. 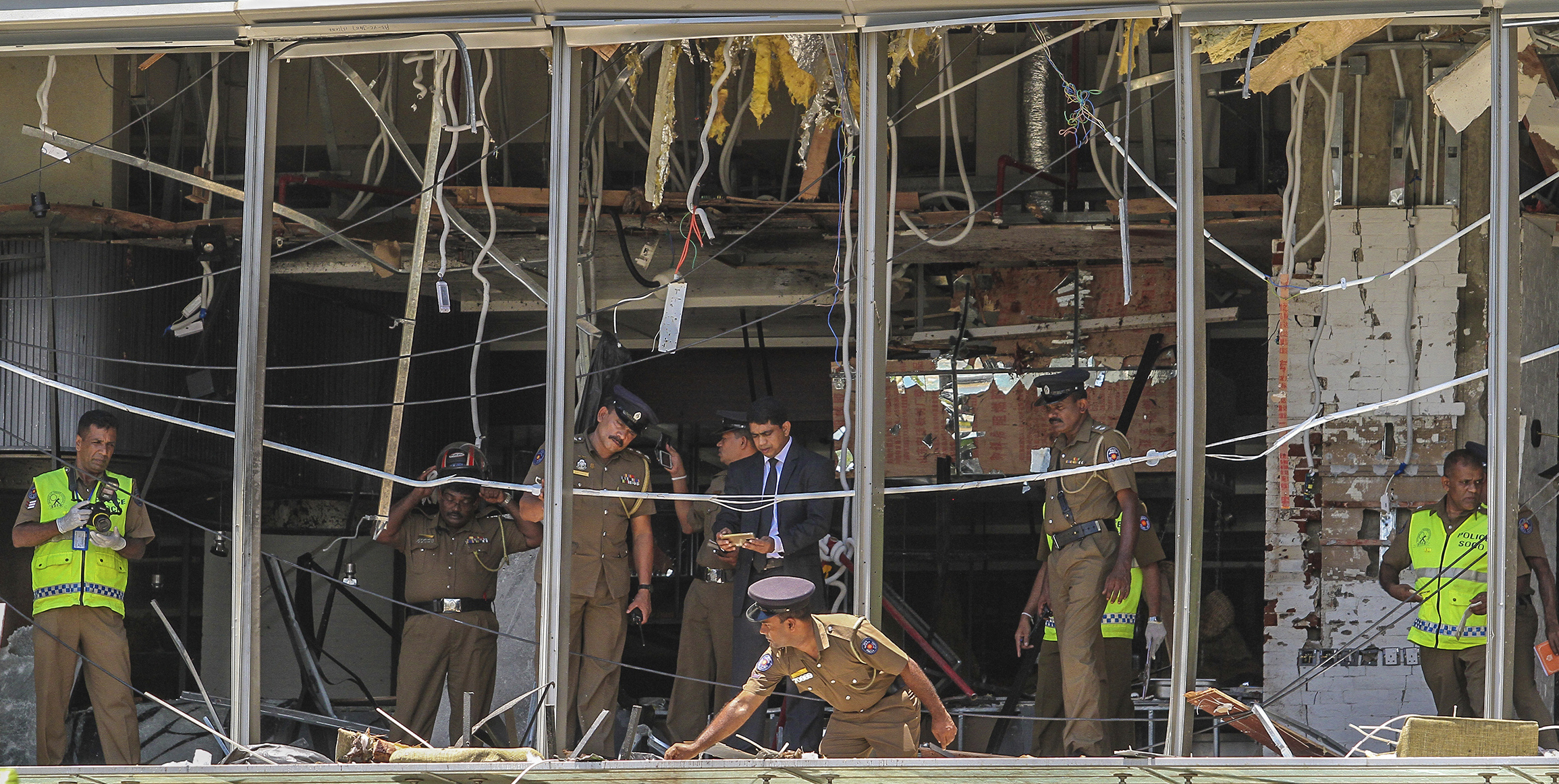 In this Sunday April 21, 2019, photo, a Sri Lankan Police officer inspects a blast spot at the Shangri-la hotel in Colombo, Sri Lanka. Sri Lankan authorities blame seven suicide bombers of a domestic militant group for coordinated Easter bombings that ripped through Sri Lankan churches and luxury hotels which killed and injured hundreds of people. It was Sri Lanka’s deadliest violence since a devastating civil war in the South Asian island nation ended a decade ago. (AP Photo/Chamila Karunarathne, file)

“Some of the intelligence people saw his picture but they didn’t take action,” said N.M. Ameen, the president of the Muslim Council of Sri Lanka.

Tension coursed through Colombo on Tuesday as the military took on emergency war-time powers, allowing them to conduct warrantless searches and detain suspects for up to two weeks before a court hearing.

Such powers haven’t been invoked since Sri Lanka’s bloody civil war, when people feared that unclaimed bags or debris could hide a bomb. On one commuter train Tuesday morning, panicked passengers shouted over one unclaimed piece of luggage until its owner was found.

Authorities have blamed National Thowfeek Jamaath for the attack. Its leader, alternately known as Mohammed Zahran or Zahran Hashmi, became known to Muslim leaders three years ago for his incendiary speeches online.

“It was basically a hate campaign against all non-Muslims,” said Hilmy Ahamed, the Muslim council’s vice president. “Basically, he was saying non-Muslims have to be eliminated.”

Zahran’s name was on one intelligence warning shared among Sri Lankan security forces, who apparently even quietly took their growing concerns to international experts as well.

Anne Speckhard, the director of the International Center for the Study of Violent Extremism, said a Sri Lankan intelligence official approached her at a conference in February with a surprising question. She was worried about what she described as a violent, homegrown jihadi group that “would just disappear” when the government tried to crack down on them.

“The intel person kind of came up to me and said, ‘You know, we’re kind of worried about this new group and there’s some activity going. What do you think?'” Speckhard told The Associated Press on Tuesday. “It just kind of blows my mind that’s who it was.”

As far as the planning, Speckhard noted that Sri Lanka was “a part of the world that developed suicide vests” during the civil war against the Tamil Tigers, a secular, nationalist group that once was the world’s top suicide attacker. But the style of Sunday’s attacks, targeting churches on Easter and hotels frequented by foreigners, followed that of al-Qaida and the Islamic State group.

“The degree of sophistication in the making of the bombs indicates that the attackers did in fact have help from outside Sri Lanka, which could have come via coordination with external militant groups such as al-Qaida or the Islamic State, from Sri Lankan fighters returning from battlefields in Iraq and Syria, or from a combination of the two,” a Stratfor analysis said Tuesday. “Clarity on the nature of such networks, however, will have to wait for the emergence of more details about the attacks.”

The Islamic State group claimed responsibility for the Sri Lanka attack via its Aamaq news agency on Tuesday. The group, which has lost all the territory it once held in Iraq and Syria, has made a series of unsupported claims of responsibility.

Community leader Michael Brunker on racism and what needs to change

The Latest: India has another biggest 1-day jump in cases

Protesters pour into cities for another huge mobilization

Pandemic makes for a lonely D-Day observance in Normandy