Earlier Tuesday, Joe Biden called on Congress to impeach President Donald J. Trump if Trump does not co-operate with Congress over Ukraine phone call. Earlier, Trump announced he has authorized the release of fully declassified and unredacted transcript of his conversation with Zelensky.

Joe Biden is expected to call on Congress to impeach President Donald J. Trump if Trump does not co-operate with Congress over Ukraine phone call.Earlier, Trump announced he has authorized the release of fully declassified and unredacted transcript of his conversation with Zelensky.More info: https://bit.ly/2ltBZWX

Then, House Speaker Nancy Pelosi is announcing a formal impeachment inquiry against President Donald Trump. Her official announcement can be seen below:

Next, President Trump spoke on Pelosi’s announcement of an impeachment inquiry while in a meeting at the United Nations with the President of Iraq, Barham Salih.

Facts be damned. Democrats are insisting this is their moment to impeach President Trump.

WASHINGTON (AP) — Democrats lined up in ever greater numbers Tuesday urging an impeachment probe of President Donald Trump, pushed to action by his phone call with Ukraine’s new leader and what Trump may or may not have said about corruption, frozen U.S. millions and Democratic rival Joe Biden. Trump said he would release a transcript of the call on Wednesday.

House Speaker Nancy Pelosi launched the House into a formal impeachment inquiry against President Donald Trump on Tuesday, acquiescing to mounting pressure from fellow Democrats and plunging a deeply divided nation into an election year clash between Congress and the commander in chief.

The probe centers on whether Trump abused his presidential powers and sought help from a foreign government for his reelection, actions Pelosi said would mark a “betrayal of his oath of office.” She declared: “No one is above the law.”

Pelosi had long resisted pursuing impeachment, but her caucus moved swiftly in favor of a probe in recent days following reports that Trump asked Ukraine’s president to investigate Democratic foe Joe Biden and his son. Her decision sets up her party’s most urgent and consequential confrontation with a president who thrives on combat, and it injects deep uncertainty in the 2020 White House race.

Trump, who was meeting with world leaders at the United Nations, called the impending inquiry a “witch hunt” and predicted it would be a “positive for me.” 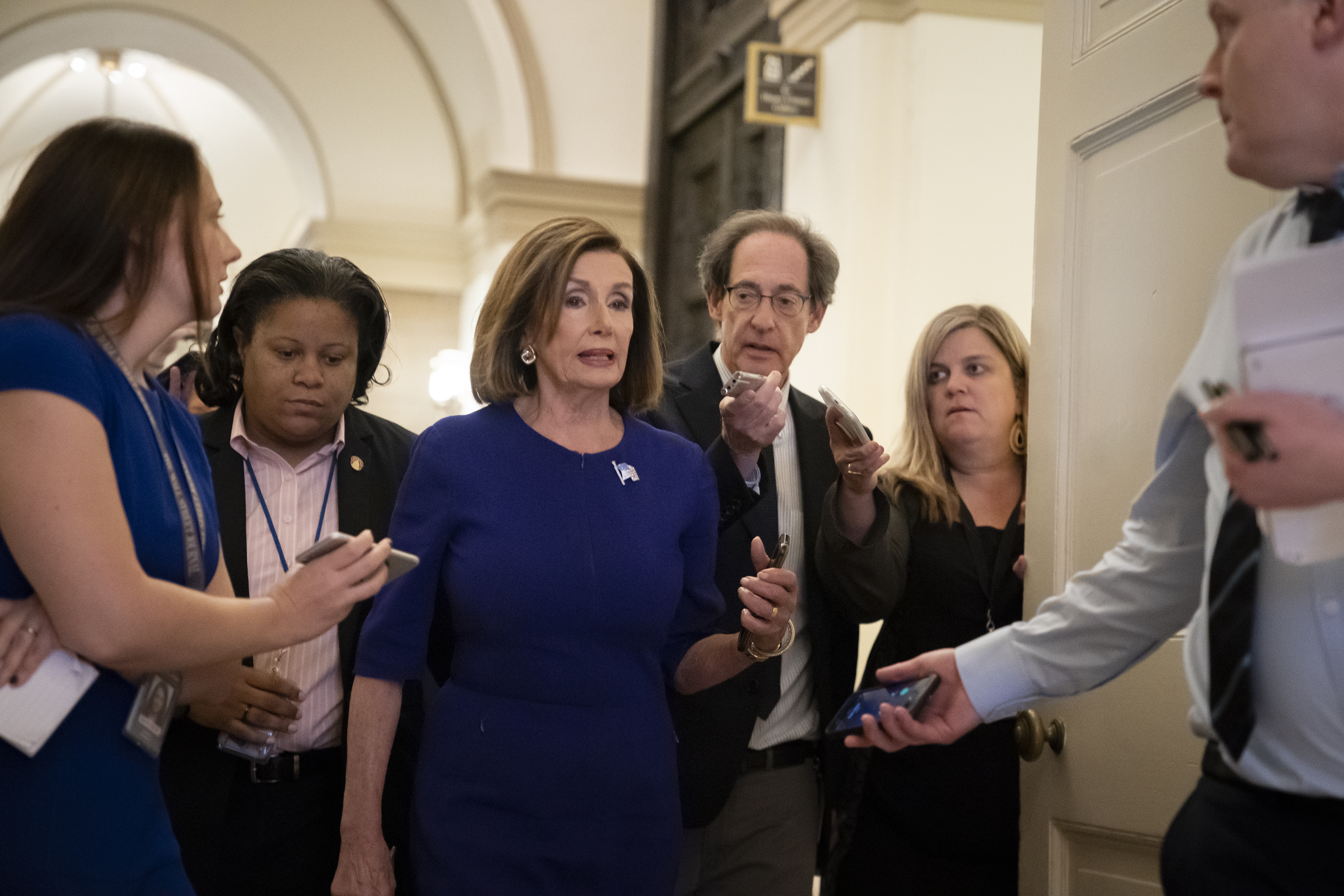 Speaker of the House Nancy Pelosi, D-Calif., is questioned by reporters as she departs the Capitol en route to a speaking event in Washington, Tuesday, Sept. 24, 2019. Pelosi will meet with her caucus later as more House Democrats are urging an impeachment inquiry amid reports that President Donald Trump pressured Ukraine to investigate former Vice President Joe Biden and his family. (AP Photo/J. Scott Applewhite)

An impeachment inquiry into a president in the middle of his reelection campaign is virtually certain to exacerbate the nation’s partisan divides. Trump has all but dared Democrats to take that step, confident that the specter of impeachment led by the opposition party would bolster his political support. Pelosi has shared that concern and has spent months trying to hold off liberals in her caucus pushing for impeachment.

At issue is a summer phone call Trump had with Ukraine’s president, which came to Congress’ attention through a whistleblower complaint. Trump has insisted he did nothing wrong in the call, but has suggested he raised Biden and his son Hunter as part of discussions over corruption in Ukraine — despite no evidence of wrongdoing on the part of either man.

Moments before Pelosi spoke, Trump tweeted that he had authorized the release on Wednesday of a transcript of the call.

“You will see it was a very friendly and totally appropriate call,” Trump said.

The identity of the whistleblower is unknown. Democratic Rep. Adam Schiff, the chairman of the House intelligence committee, said Tuesday that the whistleblower wants to speak with the panel and could testify as soon as this week.

Pelosi has been weighing several options in response to the whistleblower complaint, including a vote on some sort of statement of disapproval after the allegations against Trump. Another option would be to create a select committee to deepen the probes of the Trump administration.

House Judiciary Committee Chairman Jerrold Nadler has declared that his committee is already conducting impeachment hearings, but the panel has been unable to get many key witnesses and documents from the Trump administration.

Rep. Levin of CA-49 in Northern San Diego has already tweeted out his support for impeaching President Trump.

I called for an impeachment inquiry months ago, and now I believe more than ever that the House must formally launch impeachment proceedings against the President.

I strongly agree with @SpeakerPelosi – No one is above the law. The President’s attempts to obstruct justice and disrupt our democracy have left Congress with no other option than to pursue #impeachment. https://t.co/L9dViSYUdx