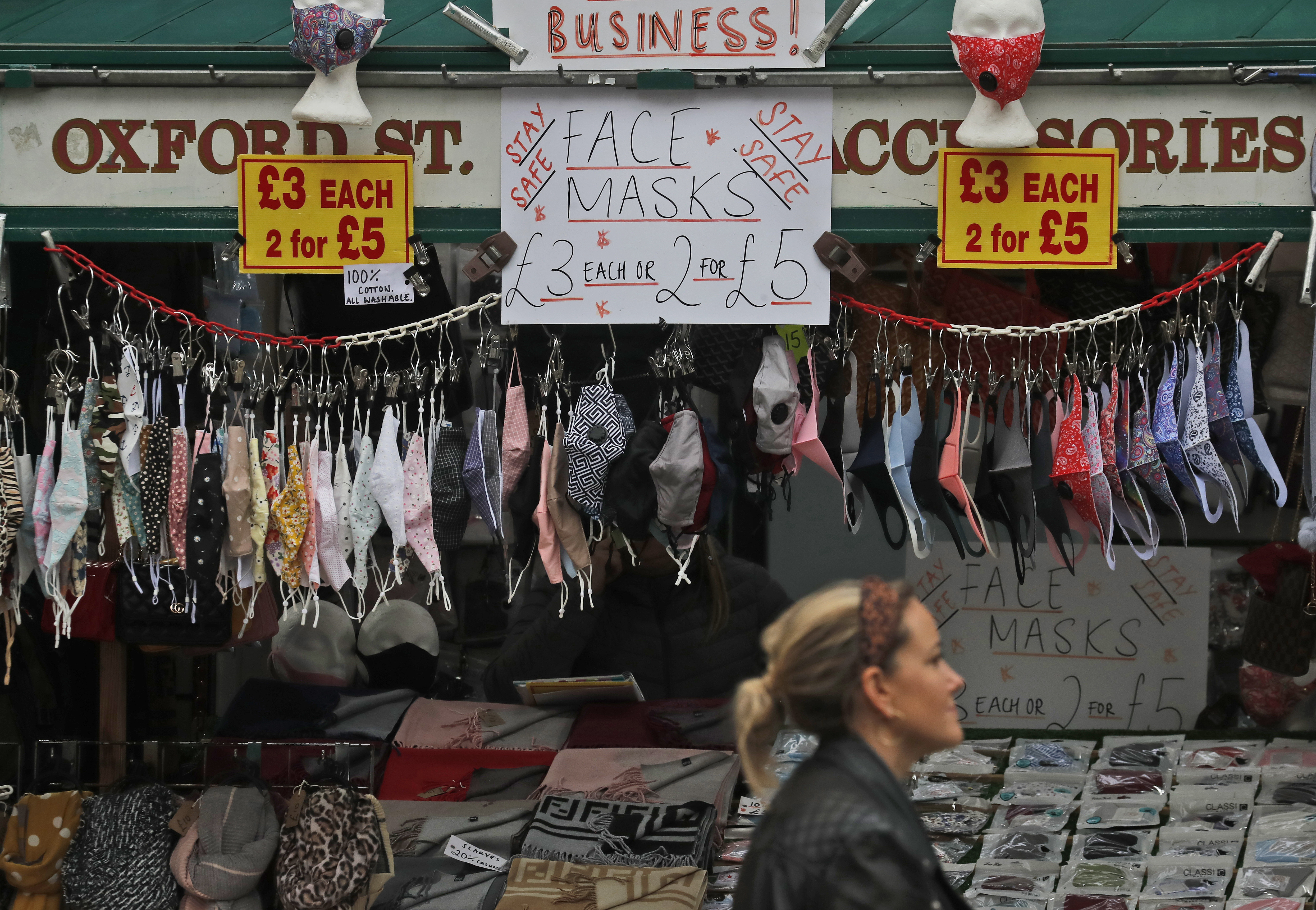 A shop sells face masks on Oxford Street in London, Tuesday, Oct. 13, 2020. Unemployment across the U.K. rose sharply higher in August which is a clear indication that the jobless rate is set to spike higher when a government salary-support scheme ends this month and new restrictions are imposed on local areas to suppress a resurgence of the coronavirus.(AP Photo/Frank Augstein)

GENEVA (AP) — Governments across Europe are ratcheting up restrictions in an effort to contain the spread of the coronavirus as the continent recorded its highest weekly number of new infections since the start of the pandemic.

The World Health Organization said Tuesday there were more than 700,000 new COVID-19 cases reported in Europe last week, a jump of 34% compared to the previous week, with Britain, France, Russia and Spain accounting for more than half of new infections recorded in the region.

The increasing case numbers are partly the result of more testing, but the U.N. health agency noted that deaths were also up 16% in the region last week compared to the previous week. Doctors are also warning that while many new cases are currently in younger people, who tend to have milder symptoms, the virus could again start spreading widely in older populations, likely resulting in more serious illnesses.

In response to the latest numbers, Italy and France are restricting parties and putting limits on restaurants and bars, while Slovenia is considering similar measures. Britain unveiled a new three-tiered system for deciding what restrictions to impose based on how severe the outbreak is in certain areas.

Those moves reflect a new approach to containing the virus among governments wary of hurting already fragile economies. Even as infections surge, officials are eager to avoid the total lockdowns they imposed in the spring that resulted in massive job losses. Instead, they are relying on a patchwork of regional or targeted restrictions that have sometimes caused confusion and frustration by those affected.

The U.N. health agency appeared to support the new approach, with WHO spokesman Tarik Jasarevic telling reporters Tuesday in Geneva that lockdowns should be a “last resort.”

Italian Premier Giuseppe Conte ordered bans on pickup sports games among friends and parties in closed spaces. Private gatherings at homes with more than six people who don’t live together are also discouraged.

Like other European countries, Italy is also limiting nightlife, with bars and restaurants having to close at midnight, and drinking while standing at a bar banned after 9 p.m.

The annual Giro d’Italia was thrown into chaos Tuesday after several top riders withdrew from the cycling race following a series of positive tests for the coronavirus.

Italy made wearing masks mandatory outdoors last week, a requirement already in place in Spain, Turkey, India and a handful of other Asian countries. Elsewhere in Europe, such mandates are in effect in many places in Poland and hot spot cities like Paris, Brussels and Pristina, Kosovo, and are being introduced in several German cities.

French President Emmanuel Macron held a meeting Tuesday with his national defense council focusing on the virus. The latest figures have shown a rapid increase of infections especially in big cities.

Paris, Marseille and seven other large cities have been placed under maximum virus alert, resulting in the closure of bars, gyms and swimming pools. Public parties are banned and restaurants have to ensure a minimum 1-meter (3-foot) distance between tables, with groups of diners limited to six people.

Polish Prime Minister Mateusz Morawiecki urged the country’s citizens to observe social distancing, wear masks and disinfect hands and spaces used as he himself went into quarantine following contact with someone who later tested positive for COVID-19.

Morawiecki said in a video message that his government was working as usual and that he didn’t have any symptoms.

Poland, a nation of about 38 million, has seen a sharp spike in new daily registered infections, with 5,068 cases and 63 deaths reported Tuesday. In the summer, the new daily cases were around 600, but the numbers started rising quickly after the end of vacation.

Some doctors are warning that the chronically underfunded health care system may give in if the current rate of new cases continues.

Officials in Slovenia said they are also eyeing closures of bars, restaurants and gyms, months after becoming one of the first European countries to declare the outbreak over. Now, as case numbers rise, government spokesman Jelko Kacin said Slovenian authorities are also considering banning religious ceremonies and weddings.

Chancellor Angela Merkel has summoned the governors of Germany’s 16 states to meet in person Wednesday for the first time since mid-June.

In Britain, which has suffered the deadliest outbreak in Europe, officials defended their new system as striking the right balance. Under the plan unveiled Monday night, the northern city of Liverpool is in the highest-risk category and its pubs, gyms and betting shops have been shut.

“The prime minister has to balance protecting people’s lives and the NHS (National Health Service) from the virus while also prioritizing things that matter to us as a society, like education and keeping as many people in employment as possible,” Communities Secretary Robert Jenrick told the BBC on Tuesday

Britain’s number of confirmed COVID-19 cases has more than tripled in the last three weeks, with infection rates rising across all age groups and regions. The highest infection rates are in the northeast and northwest.

Travel restrictions have been among the most damaging to economies. In an effort to avoid to keep people and goods moving throughout the European Union, member countries approved a traffic light system Tuesday.

The countries agreed to not restrict people traveling between so-called green areas — where virus infection numbers are low — but EU governments will continue to set their own restrictions, such as quarantines or mandatory testing upon arrival, for people coming from orange or red zones.

Under the criteria adopted Tuesday, most of EU regions would be either red or orange.