ENCINITAS (KUSI) – Beacon’s Beach reopened to the public Monday, 48 hours after a 13-year-old boy was seriously injured in a shark attack at the scenic northern San Diego County surf break.

With no reported shark sightings in the area following the weekend attack, the city decided to allow the public back onto the stretch of Encinitas shoreline, beginning at 7 a.m.

Lifeguards and police will continue running extra precautionary patrols at the beach off Neptune Avenue by ground and air throughout the week, according to city officials.

Keane Hayes of Encinitas was mauled by a shark of undetermined type about 7 a.m. Saturday, while lobster diving on the first day of this year’s season for legally harvesting the crustaceans.

Witness Chad Hammel told reporters he had been with a group of friends in the ocean when he heard the boy screaming.

Four beachgoers, including a kayaker, helped the injured boy get to shore and provided first-aid prior to the arrival of an ambulance. Medics airlifted Keane to Rady Children’s Hospital, where he was admitted in critical condition.

By Sunday, the youth’s condition had been upgraded to serious, according to hospital spokesman Carlos Delgado.

During a briefing late Monday afternoon, physician Tim Fairbanks, chief of pediatric and trauma surgery at Children’s Hospital, told news crews the teen “did well in the operating room” while undergoing surgery for a “very large injury.”

The wound stretched over the left side of Keane’s body and head, from his upper back and torso to his arm and the side of his face, according to Fairbanks.

“Keane wants you to know that he has all his limbs, and he is going to be going home fully intact,” the doctor said.

The teen’s mother, Ellie Hayes, described her family as “blessed” in light of her son’s good prognosis for a full recovery. She praised his positive attitude in the aftermath of the traumatic experience, calling him “very brave, very strong.”

“He’s a warrior,” she told reporters during the hospital news conference.

Referring to Keane’s efforts to quickly get out of the ocean immediately following the attack, his mother said, “I didn’t know he was that good a swimmer.”

She also extended thanks to the good Samaritans who came to her son’s aid at the beach.

“We really do believe they saved his life,” she said.

A GoFundMe.com donation page set up to help the Hayes family with medical expenses had raised more than $28,000 as of late Monday afternoon.

A marine biologist from Cal State Long Beach is working to identify the type of shark that attacked the youth, according to lifeguards.

The press conference with Ellie Hayes, Keane’s mother, and Tim Fairbanks, Chief of Pediatric and Trauma Surgery at Rady Children’s hospital can be seen below.

Ellie Hayes speaks to reporters on her son's condition

The mother of the teen attacked by a shark speaks to reporter's on her son's condition. More: https://bit.ly/2DXu64H 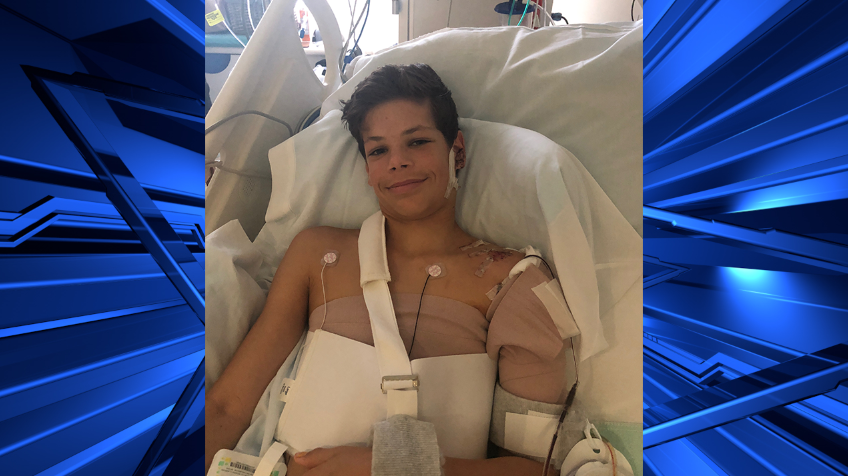