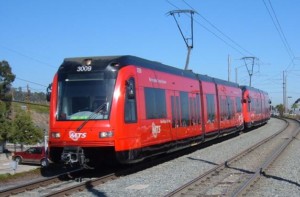 San Diego’s MTS has started onboarding security officers from Inter-Con Security to include security services on trolleys, buses, and on MTS properties.

The first officers began on New Year’s Day and by the end of the month, MTS expects to have 190 Inter-Con officers ready to join its 80 code compliance inspectors.

“The safety of our riders and employees is a top priority at MTS,” said Monica Montgomery Steppe, chairwoman of the MTS Public Security Committee and San Diego City Council President Pro Tem. “We are confident Inter-Con officers will be a great addition to our security teams.

“We are excited to have these officers on board to advance many of the reforms we’ve implemented over the past few years and look forward to working with them to serve the public,” she added.

In July, the transit system’s board of directors approved a $66 million contract with Inter-Con. The contract is for three base years with an option to extend an additional two years.

“We want to provide a safe and secure experience for all MTS riders and employees,” said Nathan Fletcher, MTS board chairman, and chairman of the San Diego County Board of Supervisors. “This new team can help us ensure we meet our obligation to protect the public, our MTS team members and anyone who engages with MTS in a safe and professional manner.”

In January 2021, MTS named Al Stiehler — who most recently served as chief of field operations for New York Metropolitan Transportation Authority, the nation’s largest — as director of transit security and passenger safety.

Since July 2020, in the wake of national protests over the murder of George Floyd in Minneapolis, MTS has been changing its security policies and procedures, including:

— adopting many of the principles in the “8 Can’t Wait” campaign as a guideline for its use-of-force policy;

— banning carotid restraints and choke holds, including the prohibition of applying knee pressure on the neck, throat or head;

— adopting a “duty to intervene” if MTS security officers witness excessive force by another employee;

— conducting a third-party peer review of its security policies and procedures, which includes a community-based steering committee to assist with recommendations.

“We have been working diligently to adopt principles, guidelines, and improve our officers’ training to a more sensible approach to security and safety enforcement,” Stiehler said. “Inter-Con presented an impressive work plan that aligns with our mission and is backed by the use of technology to track training and certifications.”

The MTS service area covers 570 square miles, 62 stations, and 53 miles of double-tracked railway. Officers are responsible for conducting fare inspections, acting as system ambassadors, supporting bus and rail operations and other employees in need and helping with lost and found items, among other tasks.

Last July, the MTS board also extended the Fare Evasion Diversion Program to Aug. 31. This pilot program reduces fines, offers a community service option in lieu of payment and a new appeal window for fare violators.

MTS is extending the pilot to get a better understanding about success factors, a board statement read. The COVID-19 pandemic made it difficult to fully analyze the program thus far, but an extension is intended to allow additional time to evaluate the effectiveness of the pilot program and identify if any changes are necessary.