SDPD: No information indicates that race played a factor in deadly shooting

Alliance San Diego, a social-justice advocacy agency, suggested that police officials might have rushed to judgment regarding the motive for the shooting rampage.

"We are concerned that even before an investigation has concluded, and despite evidence that the killer appeared to target black and Latino residents and let others leave, San Diego Police Chief Shelley Zimmerman has come to her own conclusions,” the group asserted in a statement.

People of color "need to know that law enforcement agencies are here to serve and protect all people,” the agency stated, adding that its members "call on Chief Zimmerman to conduct a thorough and complete investigation into the incident, including the possibility that the killer acted with racial animus.”

Though five black people and one Latino were among the victims, authorities do not believe the rampage by the white shooter was an ethnicity-based hate crime, San Diego Police Chief Shelley Zimmerman said. One of the surviving victims also is white.

"There is zero information to indicate that race played a factor in this terrible and horrific crime,” Zimmerman told news crews. "The victims were targeted for no other reason but their mere presence in the vicinity of the (shooting).”

5:25 p.m. — Witnesses have identified the woman killed in Sunday’s mass shooting in University City as Monique Clark of San Diego.

A friend close to Clark, Robert King, posted on Instagram saying, "I’m broken hearted. May your beautiful soul RIP. I love you so much. ?? Although our time was short together, our bond and our friendship will last forever. May God bring peace to everyone who is hurt by this tragic loss. Especially her children. RIP Monique Clark. #Rip#heartbroken #GoneTooSoon #iLoveYou#Peace"

4:23 p.m. —  An auto mechanic who carried out a shooting rampage at his University City apartment complex that left a woman dead and six others wounded was distraught over a breakup and targeted his victims randomly, police said Monday.

Peter Raymond Selis, 49, fired a large-caliber handgun into a crowd of birthday party revelers in a pool area at the apartment complex in the 9000 block of Judicial Drive just after 6 p.m. Sunday before being killed by officers, according to San Diego police.

Selis, who worked at a Ford dealership, was also deeply in debt and had filed for bankruptcy in 2015, according to news reports.

One of the shooter’s neighbors, who requested anonymity, told reporters that Selis’ daughters told her alcohol abuse and depression likely played roles in the rampage. They said their father had undergone substance-abuse treatment and attempted suicide several times about a decade ago.

Four women and three men suffered bullet wounds during the assault. One of the female victims died later in the evening at Sharp Memorial Hospital. Her name was withheld pending family notification.

A fourth man suffered a broken wrist and hand and suffered a concussion while fleeing the gunfire.

Two of the victims remain hospitalized in critical but stable condition, according to police.

One of the victims, 34-year-old Thomas Blea, told reporters during a news conference at Scripps Memorial Hospital La Jolla that he was deeply thankful for the efforts of police and medical personnel in aiding him following the ordeal.

2:18: p.m. — A gunman, distraught over a recent break up, opened fire at a pool party in a University City apartment complex Sunday while on the phone with his ex-girlfriend, killing one and injuring seven, before he was shot and killed by police, authorities said Monday.

The gunman, identified as 49-year-old Peter Selis, opened fire with a .45-caliber handgun into a crowd of people taking part in a birthday party at the pool of the La Jolla Crossings apartment complex at 9080 Judicial Drive, according to San Diego police Chief Shelley Zimmerman.

One woman died from injuries sustained in the shooting and two remain in critical condition Monday but were expected to survive, Zimmerman said. Four women and three men were struck by bullets. Another man suffered a broken arm while trying to flee.

"What started as a celebration of a friend’s birthday party turned into a tragedy of epic proportions," Zimmerman said at a news conference Monday afternoon. 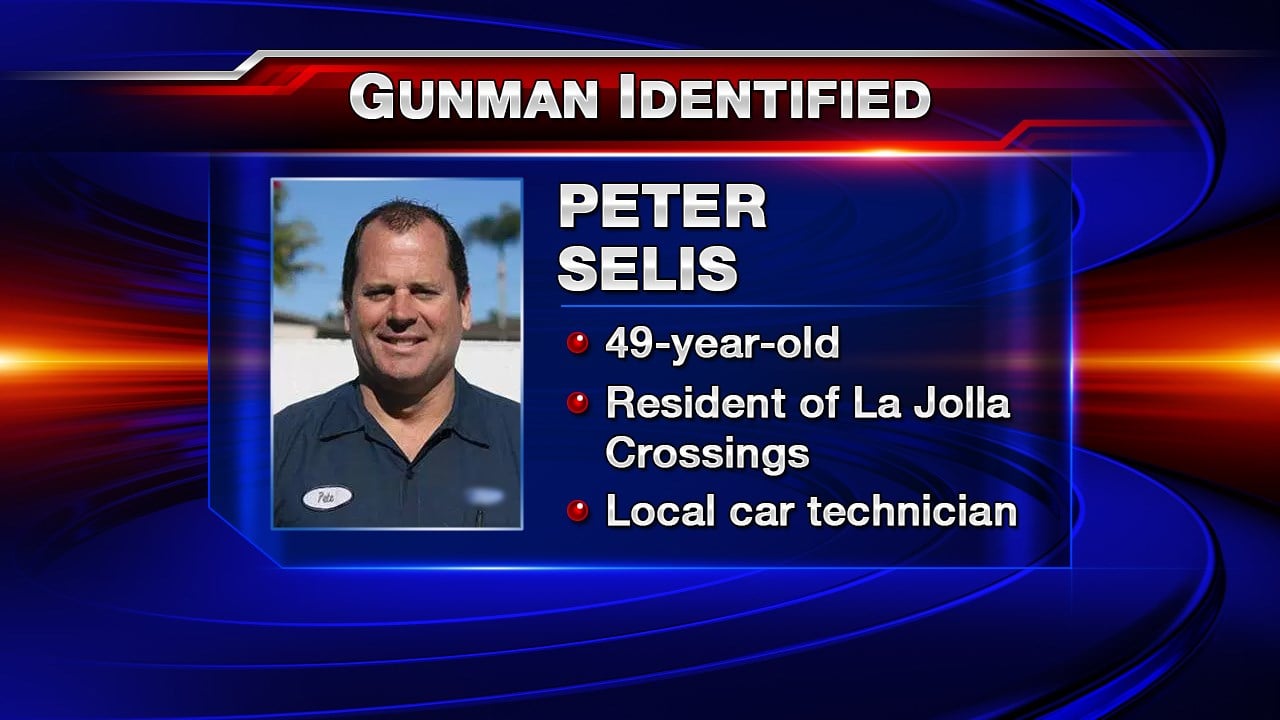 The 49-year-old man was distraught over a recent break up and called his ex-girlfriend after the first round of gunfire to tell her he had shot two people, Zimmerman said.

"It is apparent that Selis wanted his ex-girlfriend to listen in as he carried out his rampage," Zimmerman said.

Family members said he was depressed and distraught over breakup but never imagined he would do something of this nature, Zimmerman said.

A police helicopter crew alerted three officers on the ground that Selis had reloaded and was shooting into the partygoers. He eventually turned the gun toward responding police and a police Sergeant and two officers exchanged gunfire, striking and killing Selis. The shooting was over by 6:43 p.m., according to police.

Witnesses describes Selis’ demeanor as unexpectedly calm. Some said he was drinking a beer while carrying out the shooting.

All of our thoughts and prayers @SanDiegoPD are with the victims, their families and everyone affected by this terrible crime.

Five victims were taken by San Diego Fire-Rescue (SDFD) paramedics to Scripps Memorial Hospital La Jolla and at least one drove to Scripps Mercy Hospital, according to a spokesperson for the department.

It is not believed that Selis knew any of the individuals shot and the attack does not appear to be racially motivated, according to SDPD. Selis was not believed to have a criminal history. He had one handgun registered in his name.

"This was a truly horrific and disturbing act," San Diego Mayor Kevin Faulconer said. We pray for the victims and thank our first responders. Our city rejects this senseless violence."

Multiple homicide teams were investigating the incident which was ongoing as of Monday afternoon.

A GoFuneMe page was setup by Demetrius Griffin, who was at the pool at the time of the shooting. Griffin writes that all the money collected will go towards medical expenses and funeral costs.

" … the police did a phenomenal job of handling the situation and putting the citizens first. I commend the SDPD for their valor and virtue, in this disturbingly trying time … I ask, if you could, to please keep the families of those of my friends, within your prayers. In trying times like this, we need to band together, and learn from these types of experiences," Griffin wrote on the GoFundMe page.

WARNING: The video below contains graphic content that may be unsuitable for some.

"Deceptive" Measure B will impose Garbage Tax on San Diegans