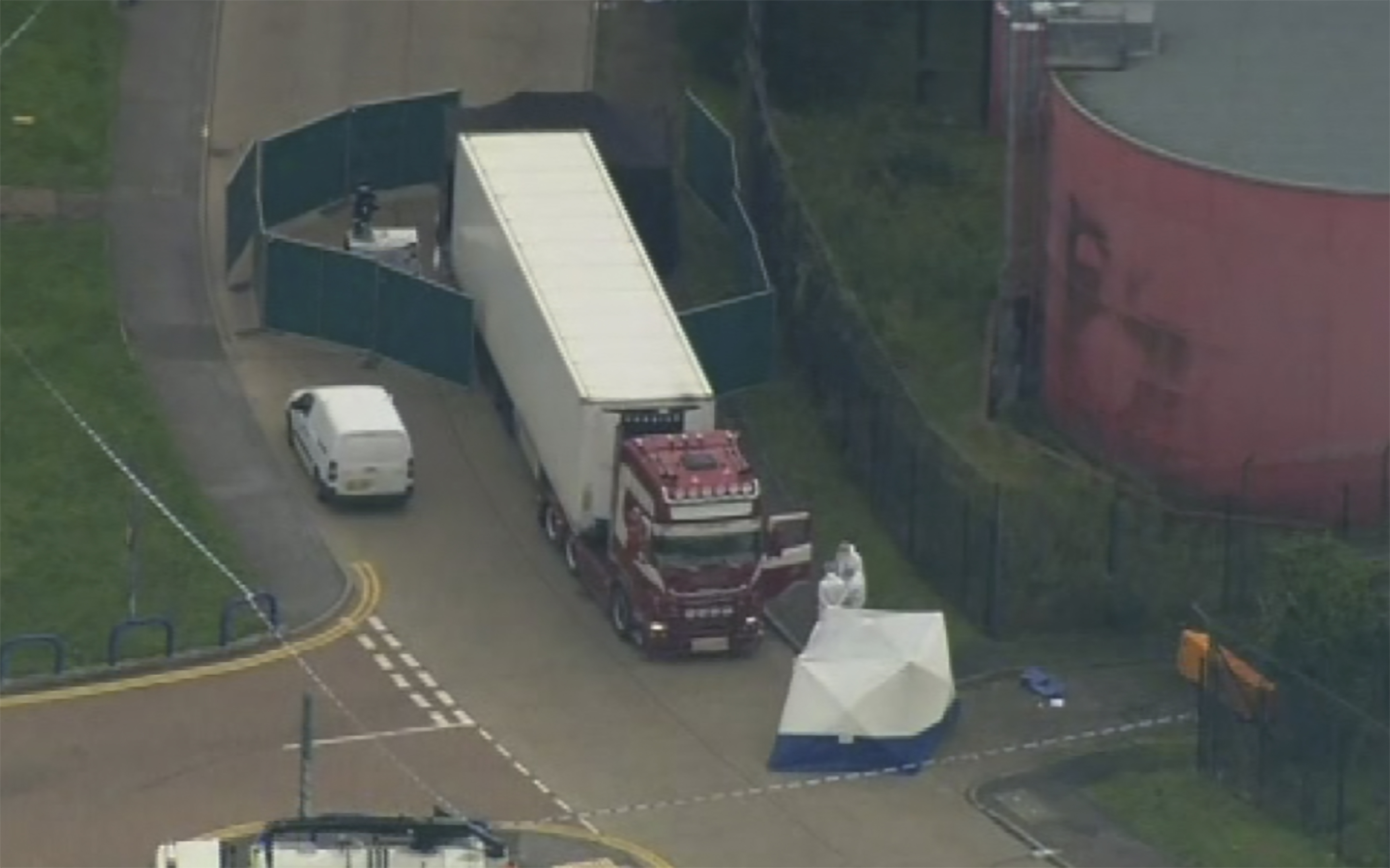 An aerial view as police forensic officers attend the scene after a truck was found to contain a large number of dead bodies, in Thurrock, South England, early Wednesday Oct. 23, 2019. Police in southeastern England said that 39 people were found dead Wednesday inside a truck container believed to have come from Bulgaria. (UK Pool via AP)

LONDON (AP) — Police in southeastern England launched a murder investigation after 39 people were found dead early Wednesday inside a large cargo truck that authorities believe was registered in Bulgaria and came into the country via Ireland.

The truck, which British police said entered the U.K. on Saturday via the Welsh port of Holyhead, was found across the country at the Waterglade Industrial Park in Grays, a town 25 miles (40 kilometers) east of London on the River Thames.

Police did not formally tie the deaths to human trafficking but a link was assumed because of the way the victims were crammed into the truck’s container. The truck’s apparently circuitous route into and around Britain also raised suspicions among shipping experts.

A 25-year-old-man from Northern Ireland who was driving the truck was arrested on suspicion of murder, police said. He has not been charged or identified.

“To put 39 people into a locked metal container shows a contempt for human life that is evil,” lawmaker Jackie Doyle-Price, who represents the region in parliament, told Parliament.

Police were called to the truck at 1:40 a.m., alerted by ambulance workers, but it was unclear how the workers heard of the tragedy.

“This is a tragic incident where a large number of people have lost their lives. Our enquiries are ongoing to establish what has happened,” Essex Police Chief Superintendent Andrew Mariner told reporters at a press conference. “We are in the process of identifying the victims, however I anticipate that this could be a lengthy process.”

Police said one victim appeared to be a teenager but gave no further details on the victims.

A cordon has been put around the white tractor-trailer and access to and from the industrial park has been restricted. Mariner said police were working with local authorities in Thurrock to mitigate “any impact our investigation scene will have” on the region.

Prime Minister Boris Johnson pledged in a tweet to work closely with Essex Police to establish exactly what happened and later told Parliament that people smugglers would be pursued and prosecuted to the fullest extent of the law.

“All such traders in human beings should be hunted down and brought to justice,” he said.

The tragedy recalls the death of 58 migrants in 2000 in a truck in Dover, England, and the deaths in 2015 of 71 migrants from Syria, Iraq and Afghanistan who were found suffocated in the back of a refrigerated truck that was abandoned on an Austrian highway close to the Hungarian border.

Smaller numbers of migrants have occasionally been found dead in trucks in Britain in recent years.

Bulgarian authorities said they could not yet confirm that the truck had started its journey in Bulgaria but were working closely with British authorities.

“We are in contact with our embassy in London and with British authorities,” Foreign Ministry spokeswoman Tsvetana Krasteva said.

Essex police say the force has not yet identified the 39 victims or where they came from.

Deputy police chief Pippa Mills said a key line of inquiry will be how the truck entered Ireland, then got on a ferry to Holyhead in Wales, on the western side of the British mainland. She refused to describe the gender of the victims.

Seamus Leheny, Northern Ireland policy manager for the Freight Transport Association, called the route used by the truck “unorthodox” since it apparently involved traveling to Ireland from somewhere in Europe and then entering Britain via a ferry over the Irish Sea to a major passenger port in Wales.

He said that choice may have been influenced by increased security and checks in the major English port of Dover and the French port of Calais, which are both on the English Channel.

Dover and Calais, which have been under pressure from human traffickers for years, have sniffer dogs, monitors and more advanced technological surveillance due to the fact that they are the endpoints for the Channel Tunnel between France and Britain.

“People have been saying that security and checks have been increased at places like Dover and Calais, so it might be seen as an easier way to get,” Leheny said. “It’s a long way around and it’ll add an extra day to the journey.”

The truck then traveled by road across Britain to Grays.

Richard Burnett, chief of the Road Haulage Association, said the truck may have traveled from the French port of Cherbourg to the Irish port of Rosslare before continuing by road to Dublin and taking a ferry to Holyhead in Wales.

Burnett said it is “highly unlikely” the truck would have been subjected to a physical check on that route because those ports have far fewer checks then Dover and Calais.