SAN DIEGO (CNS) – Joe Musgrove pitched the San Diego Padres into a National League Division Series matchup against the Los Angeles Dodgers, limiting the New York Mets to one hit over seven innings in a 6-0 victory in Game 3 their wild-card series Sunday evening.

Austin Nola, the No. 9 hitter in the Padres lineup, singled in the game’s first two runs in the second inning, and Trent Grisham, their No. 8 hitter, had an RBI single in the fourth to give the Padres a two games to one victory in the best-of-three series.

The Padres will open the series against the Dodgers Tuesday at Dodger Stadium, which will also be the site of Game 2 Wednesday. Following an off-day Thursday, the best-of-five series will shift to Petco Park Friday for Game 3 in what will be the first postseason game at Petco Park with fans since 2006.

Musgrove retired the first 12 batters in his first postseason start before allowing a leadoff single to Pete Alonso in the fifth. Starling Marte walked on a full-count curveball leading off the seventh for New York’s other baserunner. He was the only Met to advance past first, moving to second on Francisco Lindor’s ground out, but remained there.

Musgrove was warming up for the sixth inning when New York manager Buck Showalter came out of the dugout and spoke to first base umpire Alfonso Marquez.

All six umpires huddled and then went to the mound as Marquez, the crew chief, felt Musgrove’s glove, cap and ears, apparently searching for any illegal sticky substances. None were found.

In his postgame news conference, Showalter said he asked for the check because “we have privy to a lot of things that go in that direction.”

“I love him as a pitcher, always have,” Showalter said. “That’s the only thing I kind of feel bad about it, but it won’t cast anything. He’s too good a pitcher, and they’re too good — without getting into a lot of things, the spin rates and different things that I’m sure you’re all aware of when you see something that jumps out at you — I get a lot of information in the dugout that — we certainly weren’t having much luck the way it was going, that’s for sure.

“There’s some pretty obvious reasons why it was necessary.” 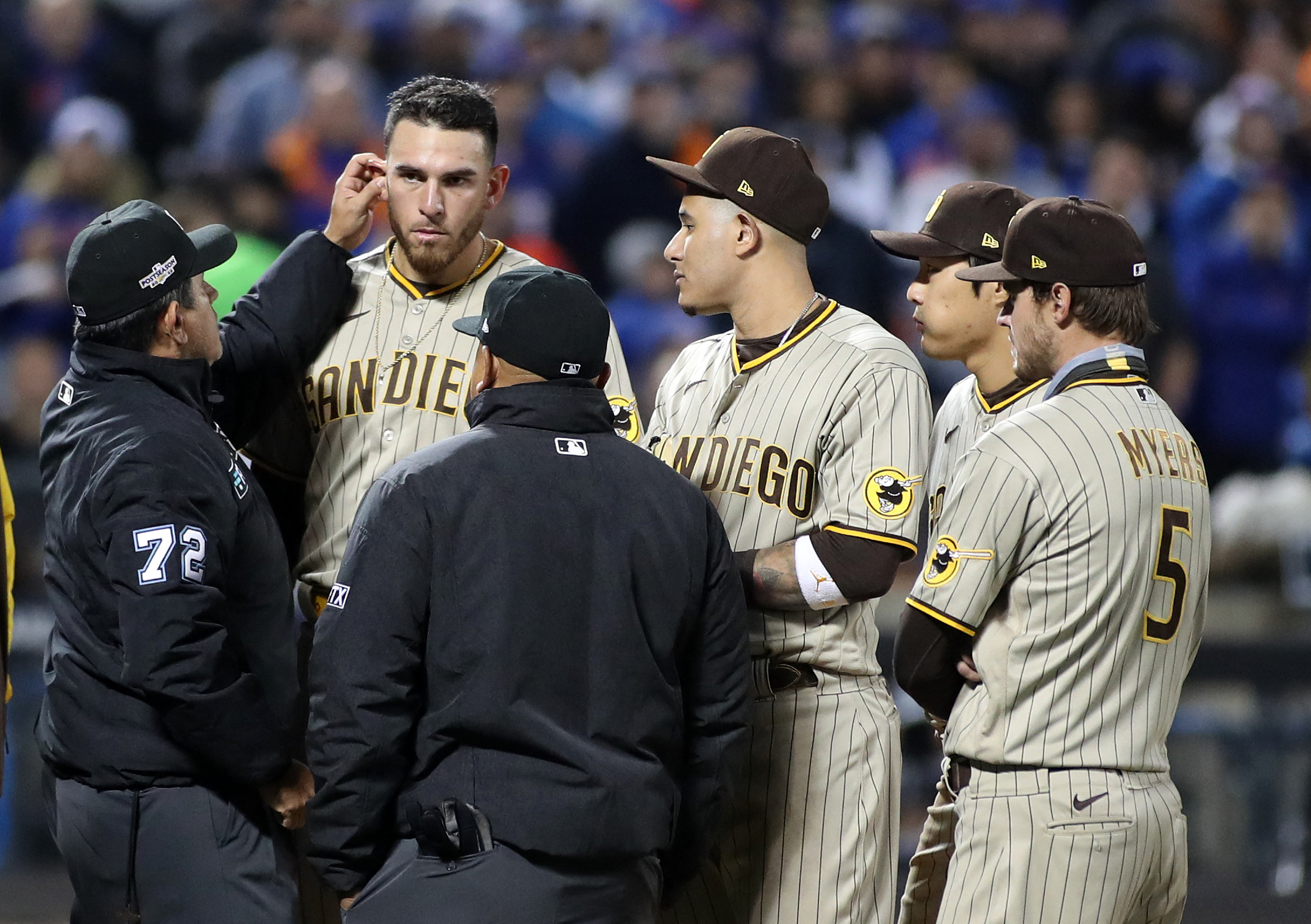 Padres manager Bob Melvin said, “Look, so I tend to be a high road guy, and I’m going to, but the problem I have is that Joe Musgrove is a man of character. Questioning his character to me, that’s the part I have a problem with, and I’m here to tell everybody that Joe Musgrove is as above board as any pitcher I know, any player I know, and unfortunately that happened to him because the reception that he got after that was not warranted.”

Musgrove said he thought Showalter “was checking for some kind of substance that was helping me spin the ball or something. I’ve seen it before. I think he’s done it before.”

“I don’t have much to say about it,” Musgrove said. “It was at the point in the game when it happened, I was so dialed in already. All my pitches felt good. I felt like I was executing. So it almost just kind of lit a fire under me.

“At that point, I was so dialed in and so focused on getting outs, it didn’t really affect me too much.”

The Padres added a run in the fifth on Manny Machado’s single and two in the eighth on Juan Soto’s single as they won their fifth postseason series since entering the National League in 1969 and first since a 2020 wild-card series against the St. Louis Cardinals in 2020.

“One thing I feel great about is we’re going to be able to take this thing home and have a playoff series in front of our fans in San Diego,” Melvin said. “Can’t wait to see them. Can’t wait to get back there. They deserve it.”

The KUSI News team shared their excitement on Twitter:

Okay describe how you’re feeling in one word. #padres 🥹🎉🎉