NATIONAL CITY (KUSI) – A National City police officer was struck and injured by a hit-and-run driver, and detectives Wednesday are investigating. 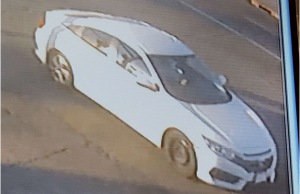 The collision happened at 7:05 p.m. Tuesday as the officer entered his parked vehicle in the 700 block of National City Boulevard, the National City Police Department said in a statement released late Tuesday night.

The statement said the officer “sustained injuries” and was taken to a hospital for treatment — but did not provide any details on his condition or the nature of his injuries. Nor did it say whether the officer was getting into his private vehicle or a police vehicle.

According to witnesses and video surveillance, the hit-and-run car continued southbound on National City Boulevard before turning west onto West 8th Street and then entered the 5 Freeway heading north, police said.

The vehicle was described as a white, four-door 2016-2020 Honda Civic. It has tinted rear windows, silver rims (with a black front right rim) and damage to its passenger-side mirror from the collision.

Anyone with information was urged to call the National City Police Department Communications Center at 619-336-4411.