SAN DIEGO (KUSI) – A wave of emailed bomb threats targeting businesses, schools and other locations across the nation put law San Diego-area enforcement agencies on alert Thursday, though there were no immediate indications that any of the menacing messages were credible.

A representative of the San Diego County Sheriff’s Department said the agency had gotten word of local instances of the threats, which also have been reported in areas such as New York, San Francisco, Oklahoma City and New England.

Other local law enforcement agencies, including the police departments in the city of San Diego, Escondido and Oceanside, were investigating the same type of threats — at least some of which demand a ransom of $20,000, paid in Bitcoin, officials said.

In the Riverside area, a business in Palm Desert was evacuated due to the threat. The sheriff’s department in that county issued a statement saying it “takes these threats very seriously and is conducting an investigation into each threat.”

That statement echoed one issued by the New York Police Department’s Counterterrorism Bureau, which stated, “We are currently monitoring multiple bomb threats that have been sent electronically to various locations throughout the city. These threats are also being reported to other locations nationwide and are not considered credible at this time.”

One person who received the emailed threat at an unidentified location posted a copy on Twitter. The message states there was an explosive device in the subject company’s building, and it demanded the same cryptocurrency ransom mentioned in the other instances of the threat, to be paid by the end of the day. 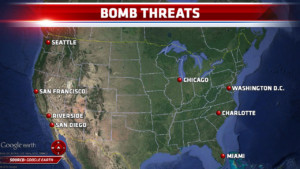 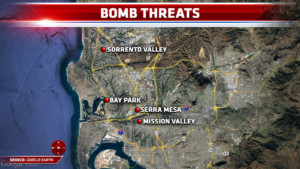