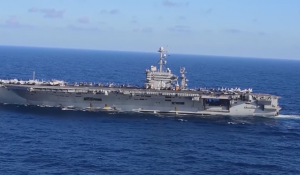 Another SEAL candidate, whose name was not released, was in stable condition Sunday at Naval Medical Center San Diego.

Earlier Friday, Mullen and his SEAL class completed Hell Week, a five- day event during the first phase of the Navy SEAL assessment and selection pathway.

“We extend our deepest sympathies to Seaman Mullen’s family for their loss,” said Rear Adm. H.W. Howard III, commander, Naval Special Warfare Command. “We are extending every form of support we can to the Mullen family and Kyle’s BUD/S classmates.”

The two sailors were not actively training when they reported symptoms and were taken to hospitals to receive emergency care, Navy officials said.

The cause of Mullen’s death was not immediately known and an investigation was underway.