SAN DIEGO (KUSI) – A full-day sentencing hearing encompassing victim statements and legal arguments from both sides was laid out out Tuesday for a Navy petty officer who was behind the wheel of a pickup truck that plummeted over the side of a transition ramp to the San Diego-Coronado Bridge and landed in Chicano Park, killing four people.

Richard Anthony Sepolio, 27, faces a maximum of nine years and eight months in state prison when he is sentenced a week from Thursday for the Oct. 15, 2016, crash that killed Annamarie Contreras, 50, and Cruz Contreras, 52, a married couple from Chandler, Arizona; and Hacienda Heights residents Andre Banks, 49, and Francine Jiminez, 46. Seven other people were seriously injured.

Sepolio had faced up to 18 years on his convictions for vehicular manslaughter while intoxicated and DUI causing injury, but the application of certain sentence enhancements were modified in court at Tuesday’s hearing, reducing his potential maximum prison term.

Among the legal arguments considered Tuesday included whether Sepolio could legally be sentenced for both vehicular manslaughter and its “lesser included offense” of DUI causing injury, and how various allegations regarding injuries to the seven wounded victims could be applied to Sepolio’s sentence.

The May 2 hearing will begin with victim impact statements lasting from 9 a.m. into mid-afternoon, then San Diego Superior Court Judge Charles G. Rogers will hear attorney arguments and hand down Sepolio’s sentence.

Sepolio is expected to make a statement to the court and will be allowed to wear his Navy uniform at the hearing, per a request from defense attorney Paul Pfingst.

Outside court, Deputy District Attorney Cally Bright said the nearly 10-year maximum sentence “hardly seems like the right amount of time when four people were killed and seven others injured, but that’s the nature of the DUI laws.”

RELATED STORY: Jurors reach a verdict in the trial of Richard Sepolio

Bright said the state’s DUI laws and sentencing guidelines were inconsistent and problematic, with some cases providing harsher punishments for DUI offenders who injure victims than those who cause fatalities. Bright said due to some crimes being classified as “serious” felonies and others “violent” felonies, a person convicted of DUI causing injury receives 15 percent custody credit while incarcerated, while someone convicted of vehicular manslaughter while intoxicated gets 50 percent credit.

“A person in California will actually spend more time in prison for driving under the influence causing great bodily injury than an ordinary negligence manslaughter case where someone is intoxicated and (a victim) dies,” the prosecutor said. 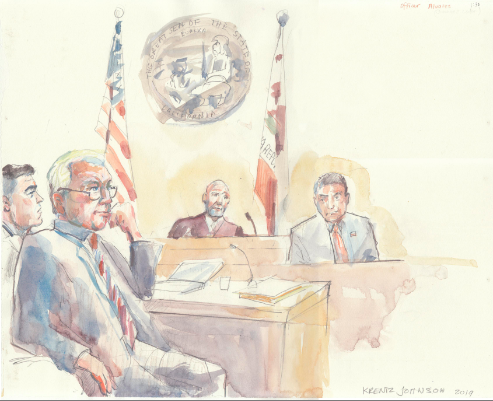 Bright told jurors that Sepolio chose “to drive irritated, impaired and impatient.” The prosecutor said that in addition to having drinks prior to getting behind the wheel, Sepolio was arguing with his girlfriend over the phone just moments before losing control of his truck on the bridge.

Sepolio testified he was driving on the transition ramp — a route back to Coronado that he had driven more than 90 times before — when he sped up to merge in front of another car and lost control.

The defendant said he remembered being on top of a freeway barrier looking down, then waking up in the park and being pulled out of his truck. Sepolio said his memory was mostly “cloudy” about what happened after his truck plunged into the crowd below.

On the stand, he denied arguing with his then-girlfriend on the phone just before the crash, but admitted on cross-examination that he’d just left a lunch with a female Navy colleague where “the idea was to go out and have a good time.” Sepolio testified he had a glass of alcoholic cider and a glass of wine at lunch before heading back to Coronado.

Whether Sepolio was intoxicated was a point of contention during the trial, particularly with one blood sample not tested for more than a year after the crash, according to Pfingst.

While the jury did not find Sepolio guilty of the greatest charge he faced — gross vehicular manslaughter while intoxicated — jurors did not disagree that Sepolio was under the influence.

Bright said she believed Sepolio was grossly negligent due to driving while under the influence and distracted, but supported the jury’s findings, which included its rejection of the charge that Sepolio was intoxicated above the legal blood-alcohol limit.