A Navy probe of the event found that the students were “participating in a sophomoric game” on Saturday and had no racist intent. 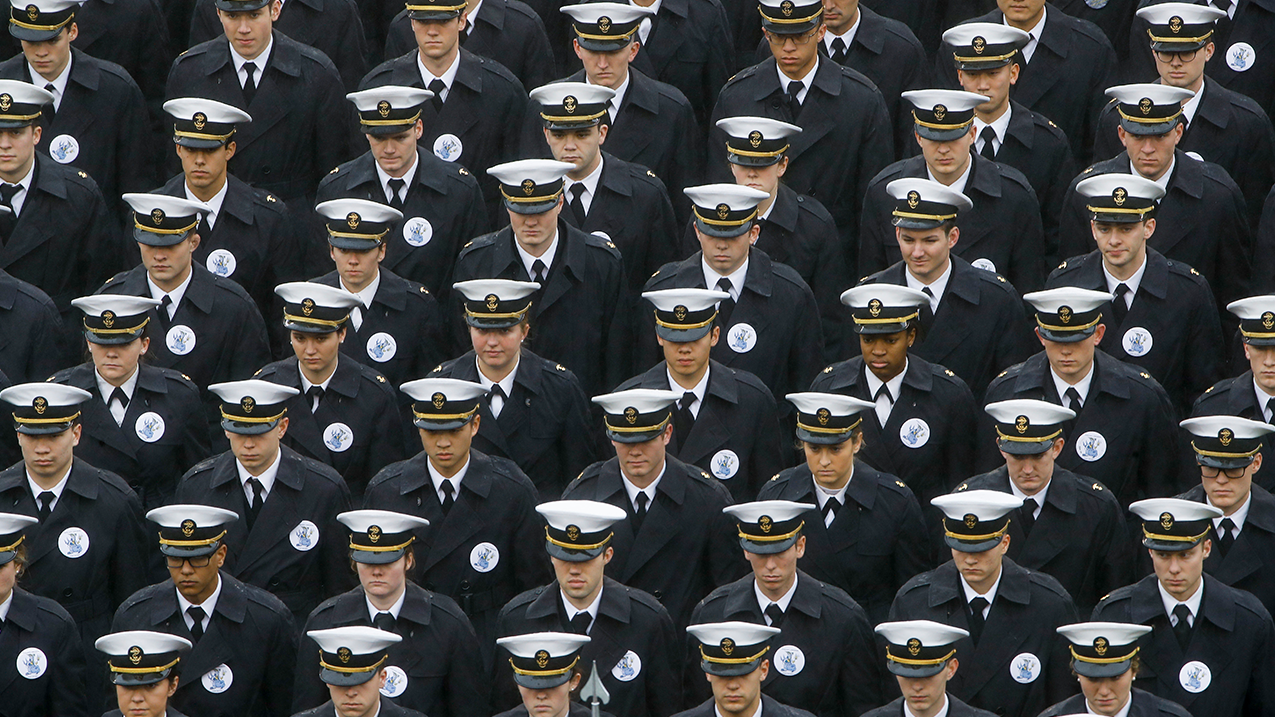 In this Dec. 14, 2019 file photo, Navy midshipmen march onto field ahead of an NCAA college football game between the Army and the Navy in Philadelphia. Video of midshipmen and cadets making hand gestures in the stands at the Army-Navy football game outraged some commentators who claimed they were “white power” signals, and exasperated others who say the students were merely playing a popular children’s game. The U.S. military and naval academies are investigating. (AP Photo/Matt Rourke, File)

The Navy said officials are, however, disappointed in the immature behavior of the students and “their actions will be appropriately addressed.” There was no immediate information about what types of punishment the students are facing.

Clips of the hand gestures by the students went viral on social media and immediately raised questions about whether they were using a “white power” sign. But others suggested it was part of what’s called the “circle game,” in which someone flashes an upside-down OK sign below the waist and punches anyone who looks at it.

The Navy said that reviews of the footage, more than two dozen interviews and background checks by the Naval Criminal Investigative Service and the FBI determined that the two freshmen midshipmen were participating in the “circle game” with West Point cadets.

Navy Adm. Mike Gilday, chief of naval operations, said sailors are expected to conduct themselves with integrity and character at all times.

“To be clear, the Navy does not tolerate racism in any form,” said Gilday. “And while the investigation determined there was no racist intent behind these actions, our behavior must be professional at all times and not give cause for others to question our core values of honor, courage and commitment.”

The circle game, around for generations, was featured in the early 2000s sitcom “Malcolm in the Middle” and has made a resurgence as a photo bomb prank in sports team photos–along the same line as “bunny ears” fingers. In more recent years, it became an internet meme in a online game of “gotcha.”

But the Anti-Defamation League said the gesture, with the thumb and forefinger touched in a circle and the other fingers outstretched, has also been appropriated as a signal for white supremacy. That started as a hoax perpetuated on the online message board 4chan. The original idea was to take an innocent and common gesture and arbitrarily transform it into something that would enrage liberals.

The campaign was so successful, the gesture came to be used semi-sincerely by Neo-Nazis, Ku Klux Klansmen and other white nationalists to signal sympathizers in public places.

In 2018, the U.S. Coast Guard suspended an officer who appeared to be making the hand sign during a Hurricane Florence television broadcast.