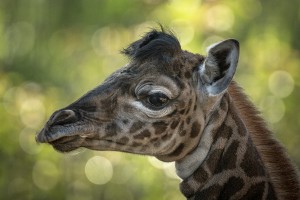 Mawe — pronounced “maw-way” — was born to first-time mom Saba three weeks ago. At birth, she weighed a little under 150 pounds and stood around 5 feet, 10 inches tall.

According to the zoo, the calf has been introduced to the other members of the herd, and both the mother and daughter are doing well.

There are fewer than 100,000 giraffes estimated left in their native habitats across the world — a decrease of more than 40% over the last 20 years, according to a statement from the zoo. It is believed that the downward trend is due to habitat loss, habitat fragmentation and poaching in certain regions.

“San Diego Zoo Wildlife Alliance has partnered with numerous conservation organizations on large-scale conservation projects, in an effort to slow and eventually stop the continued decline of giraffe populations,” the statement read.