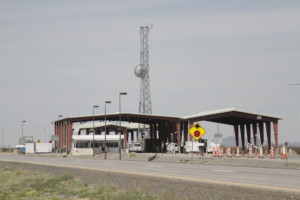 This Tuesday, March 26, 2019, photo shows a border patrol checkpoint, north of Las Cruces, New Mexico, that U.S. immigration authorities have closed and have reassigned agents to repurpose inspection areas to handle an influx of Central Americans arriving at the Mexican border. All of the checkpoints in the El Paso, Texas, sector, which includes New Mexico and West Texas, have been closed. (AP Photo/Cedar Attanasio)

The Alamogordo Daily News reports that Otero County on Wednesday declared a state of emergency, noting the need for open checkpoints to stop drugs and illegal activity at the border.

Otero County Commission Chairman Couy Griffin says if the county’s demand is not met in one week’s time, it will provide its own security for the checkpoints. Griffin also threatened taking legal action against the state.

Governor’s office spokesman Tripp Stelnicki says the National Guard “does not and would not operate federal checkpoints.”

Checkpoints in the area shut down last month, as agents were pulled to help process an influx of migrants claiming asylum at the border.