OCEANSIDE (KUSI) – The famous “Top Gun House” has arrived at its new permanent home at the new Oceanside Beach Resort.

Full press release from Visit Oceanside on the new location of the Top Gun House:

S.D. Malkin Properties, Inc., an innovative developer and owner of iconic retail, hotel and entertainment destinations, who broke ground on the Oceanside Beach Resort in February of last year, is spending nearly $1 million to relocate and restore the ‘Top Gun House’, and moved the iconic cottage to its new permanent location at the Oceanside Beach Resort on Thursday, May 21.

The ‘Top Gun’ House, also known as the ‘Graves House’ named for its original owner, Dr. Henry Graves who built the Victorian classic in 1887, is one of only a few from the era that remain standing. “The particular design of this building is called Folk Victorian, which is rare in San Diego County,” says John Daley, vice president of the Oceanside Historical Society. 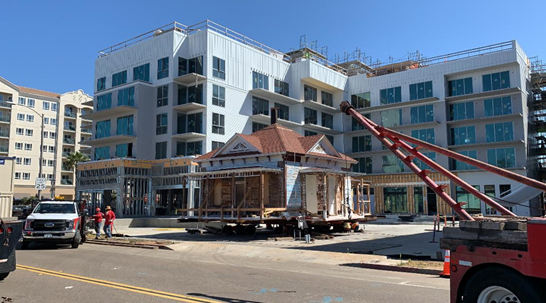 Top Gun house being move to its permanent home at the Oceanside Beach Resorts.

“We’ve had a longstanding commitment to the ongoing transformation of Oceanside and to making its beachfront village the vibrant focal point of San Diego’s north coast,” said Jeremy Cohen, S.D. Malkin Properties Director. “By restoring this iconic house and having it as a key feature at the new Oceanside Beach Resort, we celebrate the future of Oceanside by referencing the past and preserving its history.” The developer is looking for unique commercial uses for the ‘Top Gun House’ that will be accessible to the public and can be enjoyed by locals and visitors alike.

Leslee Gaul, CEO and President of Visit Oceanside, explained further. “The ‘Top Gun House’ has been a draw for visitors all over the world, so we couldn’t be more thrilled to have it restored and once again accessible to the public. This milestone is definitely a bright spot during such uncertain times for our industry and gives our visitors something to look forward to seeing and experiencing once we are all able to travel again.”

The house was moved from its original site after groundbreaking in February 2019 to allow construction to begin on the project, which is the largest oceanfront development in San Diego County in the last decade. Since then, the ‘Top Gun House’ has undergone months of restoration, including structural improvements and cosmetic detailing that give the house its distinctive Victorian look. With essential and architectural renovations complete, the house has been moved to its permanent site by specialist John Hansen House Moving of San Diego. The restorers will shortly paint the exterior of the house to approximate its historic colors.

Since the 1880s the Graves House has received many coats of paint comprising of a variety of color schemes. The project preservation consultant investigated the original color scheme of the house by scraping through the paint layers at key locations (siding, trim, decorative elements, window sashes, etc.). Through this process, they were able to confirm that the ‘Top Gun’ blue and white scheme was not the original color scheme, nor was it appropriate for a Victorian house. The historic black and white photos were also utilized in their research. Although monochrome, the historic photos yielded a good amount of information, including identifying elements with similar colors and also the number of different colors that were used. The contrast between elements with different colors also helped to confirm the field research.

Situated along over 600 feet of beachfront, the Oceanside Beach Resort is set to open in Spring 2021. The 2.75-acre new-build project along Mission Avenue and N. Pacific Street will offer guests immediate beach access and 387 rooms, 85 percent of which will have water ocean views, across two bespoke hotels. San Diego-based, award-winning firm Delawie is the architect for both properties, which will be part of the Joie de Vivre Hotels and Destination Hotels brands and be operated by Hyatt.

The Carlsbad Flower Fields are now welcoming back visitors

San Diego's last native freshwater turtle is in hot water. Here's what you can do.

The Carlsbad Flower Fields are now welcoming back visitors

Update on the campaign to recall Gov. Newsom