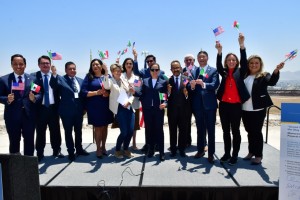 SAN DIEGO (KUSI) – Dignitaries from California and Mexico signed a memorandum of understanding Monday to open a new port of entry at the U.S-Mexico border in Otay Mesa by late 2024.

Officials say the State Route 11/Otay Mesa East Port of Entry Project will help facilitate and bolster trade between the two countries by adding a third port of entry in the San Diego region, as well as cut down on motorist wait times at the border, thus improving air quality by reducing emissions from vehicles that are often idling bumper-to-bumper at border crossings.

Described as a “21st Century border crossing,” the project is slated to feature a number of technological systems to monitor wait times and reduce traffic congestion, including electronically collected tolls, a traveler information system that will inform drivers on toll rates and wait times, and interchangeable primary inspection lanes that differ between peak passenger and commercial vehicle travel times.

More than $500 million has been invested into the project to date, with a total of around $1 billion estimated for the facility on both sides of the border.

California Lt. Gov. Eleni Kounalakis said the new port of entry’s improvements “will help drive economic activity on both sides of the border,” while Roberto Velasco Alvarez, Mexico’s general director for North America, Ministry of Foreign Relations, called wait times at the border “the main barrier to trade” between the U.S. and Mexico.

Peak wait times at existing ports of entry will be reduced by roughly 50% when the Otay Mesa East Port of Entry opens, according to David Kim, secretary for the California State Transportation Agency.

The goal of the new port of entry is to reduce average wait times down to “no more than 20 minutes,” SANDAG chair and Encinitas Mayor Catherine Blakespear said.

The memorandum of understanding reached between the two countries and signed during a Monday press conference laid the groundwork regarding project milestones, toll locations on the U.S. side and toll revenue sharing policies that will help finance the project.

“Adding a brand new port of entry will have a huge impact in terms of keeping this important trade and economic relationship going and moving forward,” Kim said.