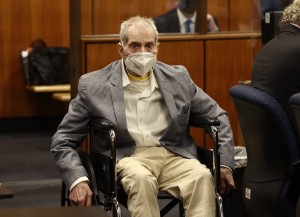 Robert Durst in his wheelchair spins in place as he looks at people in the courtroom as he appears in a courtroom in Inglewood, Calif. on Wednesday, Sept. 8, 2021, with his attorneys for closing arguments presented by the prosecution in the murder trial of the New York real estate scion who is charged with the longtime friend Susan Berman’s killing in Benedict Canyon just before Christmas Eve 2000. (Al Seib/Los Angeles Times via AP, Pool)

INGLEWOOD, Calif. (AP) — A Los Angeles jury convicted Robert Durst on Friday of murdering his best friend 20 years ago in a case that took on new life after the New York real estate heir participated in a documentary that connected him to the slaying linked to his wife’s 1982 disappearance.

Durst, 78, was convicted of the first-degree murder of Susan Berman, who was shot at point-blank range in the back of the head in her Los Angeles home in December 2000 as she was prepared to tell police how she helped cover up his wife’s killing.

Berman, the daughter of a Las Vegas mobster, was Durst’s longtime confidante who told friends she provided a phony alibi for him after his wife vanished.