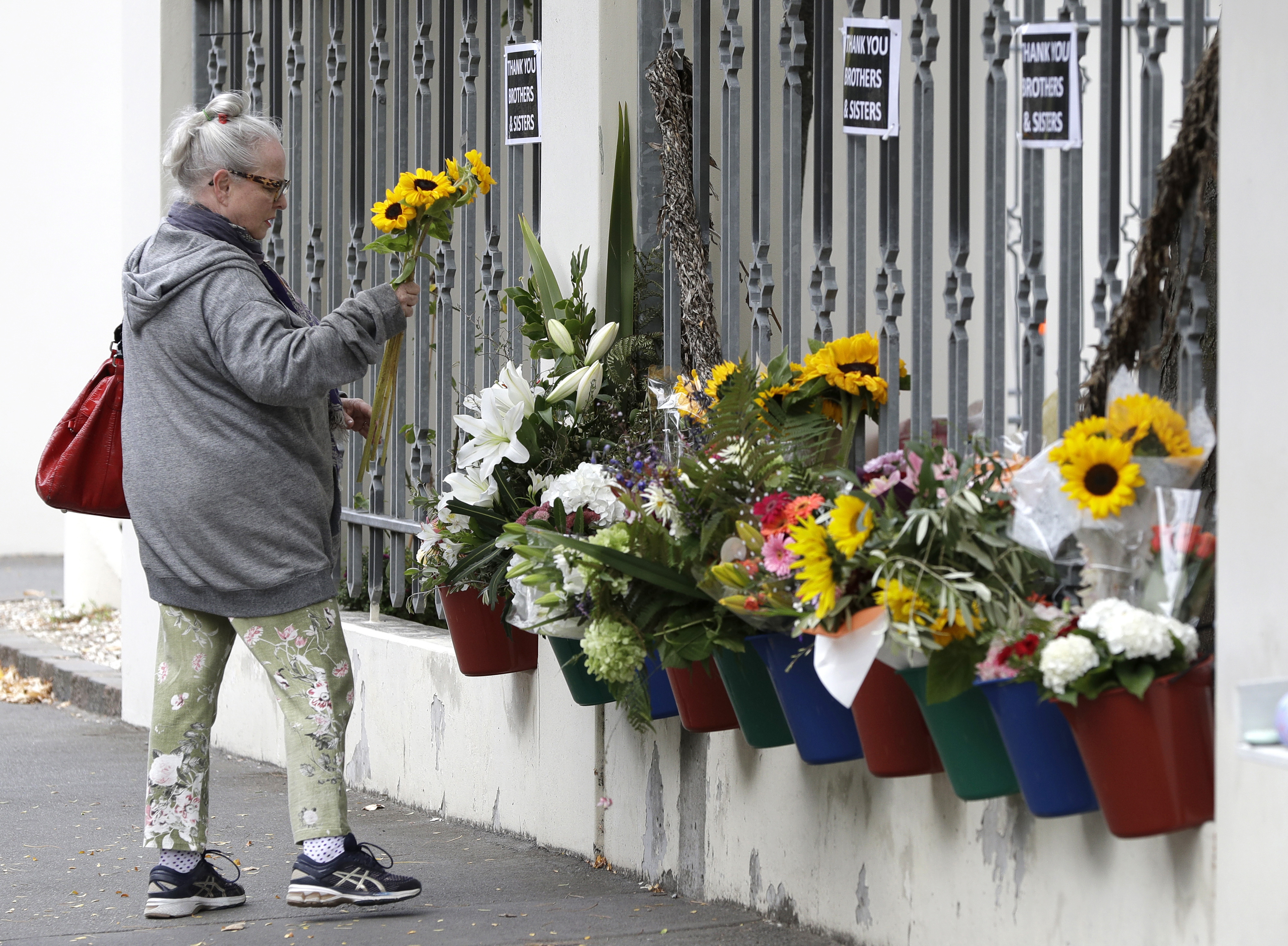 A woman prepares to lay flowers outside the Al Noor mosque in Christchurch, New Zealand, Sunday, March 15, 2020. A national memorial in New Zealand to commemorate the 51 people who were killed when a gunman attacked two mosques one year ago has been canceled due to fears over the new coronavirus. (AP Photo/Mark Baker)

The attacks targeting people praying at the mosques a year ago shocked the nation and prompted new laws banning the deadliest types of semi-automatic weapons. It also prompted global changes to social media protocols after the gunman livestreamed his attack on Facebook, where it was viewed by hundreds of thousands of people.

The sudden turn in the case took survivors and relatives by surprise, and brought relief to people across New Zealand. Many had feared Australian white supremacist Brenton Harrison Tarrant would try to use his trial as a platform to promote his views. He’d outlined those views in a 74-page manifesto he published online shortly before the attacks.

Tarrant, 29, pleaded guilty to 51 counts of murder, 40 counts of attempted murder and one count of terrorism at the Christchurch High Court. He had previously pleaded not guilty to all charges and his trial had been scheduled to start in June.

Tarrant is the first person to be found guilty of terrorism in New Zealand under laws passed after the Sept. 11, 2001, terrorist attacks in the U.S.

The change in plea came less than two weeks after New Zealanders commemorated those who died on the anniversary of the March 15, 2019, attacks.

“Honestly, I’m still trying to process what just happened,” said Aya Al-Umari, whose brother Hussein was killed in the attack on the Al Noor mosque. “I feel conflicted.”

She said that on the one hand, she had wanted to find out more details about what happened at the trial but on the other hand was feeling relieved about not having to face the trauma of sitting through it.

Temel Atacocugu, who survived being shot nine times during the attack at Al Noor, said he was surprised by the turn of events and hoped the judge would set an example at the sentencing by imposing the harshest punishment in the country’s history and helping ensure nothing like it would happen again.

“I’m happy that he has accepted that he is guilty,” Atacocugu said.

,Judge Cameron Mander has not yet set a sentencing date. Tarrant faces life imprisonment, with the judge having some discretion in deciding the minimum number of years Tarrant must serve before becoming eligible for parole.

The change in plea came at a hastily arranged court hearing at a time that New Zealand was beginning a four-week lockdown to try and combat the new coronavirus. The lockdown meant Tarrant appeared in the court via video link from his jail cell in Auckland and only a handful of people were allowed inside the courtroom, including the imams from the two mosques that were attacked.

Mander said it was unfortunate the lockdown prevented victims and family members from being able to attend the hearing but the imams were helping to represent them. He said he wanted to quickly move ahead with the hearing, especially with the COVID-19 response threatening delays to the court schedule.

Tarrant, who was wearing a gray prison sweater, showed little emotion as he pleaded guilty. He didn’t indicate why he had changed his pleas, and his lawyer could not immediately be reached for comment.

New Zealand’s Prime Minister Jacinda Ardern, who was praised around the world for her empathetic response to the Muslim community after the attacks, said it was “deeply disappointing” the victims didn’t get to attend the hearing.

But she said there was “a certain sense of relief that the whole nation, but particularly our Muslim community, are being spared from a trial that could have otherwise acted as a platform.”

Tarrant moved to New Zealand in 2017 and kept a low profile in the university city of Dunedin. He frequented a gym, practiced shooting at a rifle club range and built up an arsenal of weapons. He didn’t appear to be employed, and said in some online posts that he’d inherited a significant amount of money when his father died.

Tarrant appeared to have a fascination with religious conflicts in Europe and the Balkans, and visited a number of sites in Eastern Europe in the years before he committed the massacre. After his attack at the second mosque, Tarrant was driving, possibly to carry out a shooting at a third mosque, when two police officers rammed his car off the road, dragged him out and arrested him.