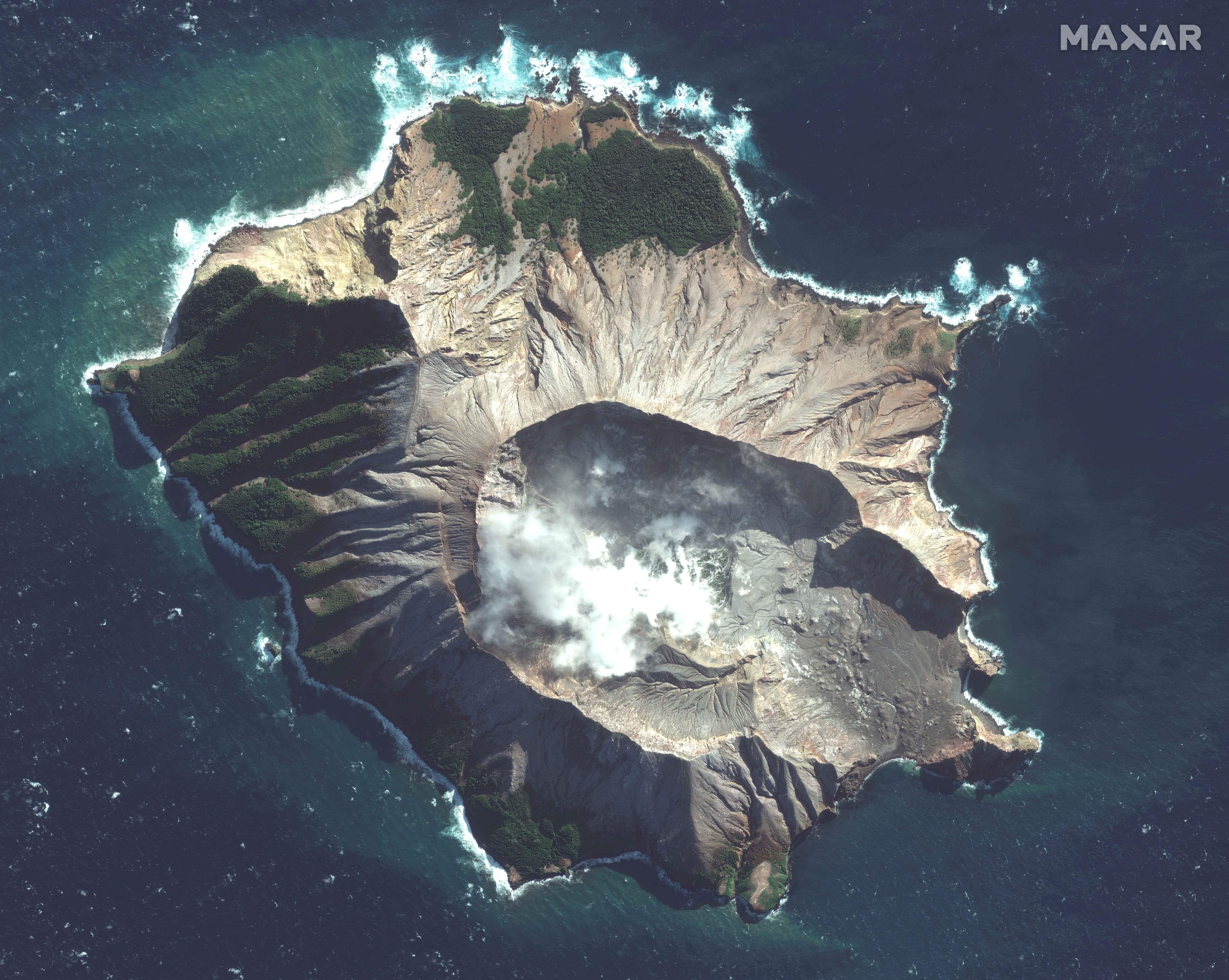 In this satellite image taken and released on May. 12, 2019, by Maxar Technologies steam rises from the volcano on White Island off the coast of Whakatane, New Zealand. A New Zealand island volcano vented more steam and mud Wednesday in an increase of geothermal activity that again delayed the recovery of victims’ bodies from a deadly eruption two days ago. (Satellite image ©2019 Maxar Technologies via AP)

WHAKATANE, New Zealand (AP) — New Zealand police and military specialists launched a risky operation Friday to recover the bodies of eight victims of a volcanic eruption on an island that has left at least eight others dead.

Just after first light, two helicopters from the New Zealand Defence Force lifted off from the township of Whakatane and traveled 50 kilometers (30 miles) to White Island off New Zealand’s eastern coast.

Eight military specialists wearing protective clothing and using breathing apparatuses landed and are trying to recover the bodies, police said. Scientists have warned that gases on the island after Monday’s eruption are so toxic and corrosive that a single inhalation could be fatal.

Police Deputy Commissioner Mike Clement told reporters Thursday evening that drones had pinpointed six bodies but the location of two others was unknown. He expected the operation to take several hours.

Police, military and other personnel will monitor the recovery operation from a ship stationed just off the island. Volcanologists aboard will use electronic equipment on the island to provide the recovery team with real-time information on the volcano’s behavior.

Scientists have warned volcanic activity has increased in recent days and the island is “highly volatile.”

That has delayed the recovery of the last victims since Monday’s eruption, which occurred as 47 tourists and their guides were exploring the island. In addition to the bodies left on the island, eight other people were killed and dozens were severely burned by the blast of scalding steam and ash.

“The risk has not passed,” Clement said. “The people who are going to be protected by the equipment they will wear tomorrow are few and far between and so we have spent considerable time making sure we have the right people with the right skills and the right equipment.”

Clement said the success of the operation would depend on many factors beyond the control of the recovery team, like “the mountain itself, the volcano, the weather and other matters, environmental factors that we don’t control.”

“A lot has to go right for this to work,” he said. “We will all be waiting tomorrow morning to ensure that the people who are putting themselves in harm’s way in the interests of recovering those bodies, our thoughts and our prayers and our love will be with them.”

New Zealand medical staff were working around the clock to treat the injured survivors in hospital burn units, and specialist medical teams are due to arrive from Australia, Britain and the United States.

The enormity of the task was clear when Dr. Peter Watson, a chief medical officer, said at a news conference that extra skin has been ordered from American skin banks. Hospital personnel anticipated needing an extra 120 square meters (1,300 square feet) of skin for grafting onto patients, Watson said.

White Island is the tip of a mostly underwater volcano that’s about 50 kilometers (30 miles) off New Zealand’s North Island and has been a popular attraction visited by thousands of tourists each year.

Authorities say 24 Australians, nine Americans, five New Zealanders, four Germans, two Britons, two Chinese and a Malaysian were visiting the island Monday at the time of the eruption. Many were from a Royal Caribbean cruise ship that had left Sydney two days earlier.

New Zealand Prime Minister Jacinda Ardern said Thursday that some injured Australians had been medically evacuated and such flights would continue. Australia previously said up to 10 such patients would be transferred to hospitals in Victoria and New South Wales states for further treatment.

New Zealand’s GeoNet seismic monitoring agency on Thursday lowered White Island’s volcanic alert level to 2, noting there’s been no further eruption since Monday, when the level had briefly been raised to 4. Its alert level since late Monday had been 3 on a scale where 5 signifies a major eruption.

A further eruption in the next day still remains a possibility, the agency said, noting volcanic tremors are rising and steam and mud were being vented regularly.