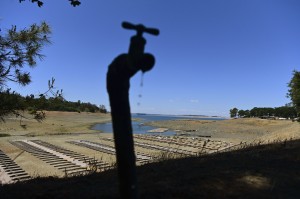 Water drips from a faucet near boat docks sitting on dry land at the Browns Ravine Cove area of drought-stricken Folsom Lake, currently at 37% of its normal capacity, in Folsom, Calif., Saturday, May 22, 2021. California Gov. Gavin Newsom declared a drought emergency for most of the state. (AP Photo/Josh Edelson)

“As the western U.S. faces a potential third year of drought, it’s critical that Californians across the state redouble our efforts to save water in every way possible,” Newsom said in a statement. “With historic investments and urgent action, the state is moving to protect our communities, businesses and ecosystems from the immediate impacts of the drought emergency while building long-term water resilience to help the state meet the challenge of climate change impacts making droughts more common and more severe.”

When the original declaration was issued in July, Newsom issued a call for Californians to voluntarily cut back there water use by 15% below last year’s level. The latest state figures, however, showed that urban water use in August was cut by just 5%.

The emergency declaration requires local water suppliers to implement water shortage contingency plans to respond to local conditions and prepare for the possibility of another dry year.

“All of our communities across the state must do what we can to conserve our limited water resources,” Adel Hagekhalil said in a statement. “Southern Californians have done a great job becoming more water efficient in recent years, and Metropolitan has worked alongside them to adjust our operations and increase our calls for conservation to ensure the region has water to get through this drought. But given the increasing severity of conditions, we all need to step up and immediately cut back our water use even more.”

Hagekhalil said the MWD board next month will consider calling on its member agencies to implement mandatory conservation measures.

“These plans, which are specific to the needs of each community, will help promote the water savings needed to ensure that the entire state has the water it needs, should these historically dry conditions continue for another year,” Hagekhalil said. “In addition, Metropolitan is taking steps in the coming months to expand our conservation programs, including offering new rebates to promote water savings in homes and businesses, so we continue to be your partners in saving water. And looking ahead, we are ensuring long-term reliability through our One Water approach, including increased investments in local water supplies such as reuse and recycling.”

In July, Newsom said a 15% cut in water use statewide would save 850,000 acre-feet of water — enough to supply more than 1.7 million households for a year. He urged residents to limit outdoor watering, use recycled water when possible outdoors, take shorter showers and only run dishwashers and washing machines when they are full.