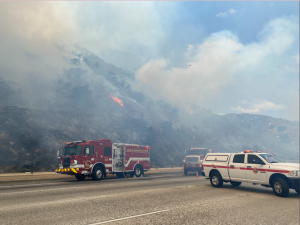 The fire started around 11:30 a.m. near I-15 and Deer Springs Road, the California Highway Patrol reported.

“Air Attack 330 advising the fire is holding at six acres, also stating three spot fires are beginning to grow, will now become main priority. One additional helitanker has launched for a total of three helicopters,” Southern California Air Operations tweeted at around 1 p.m.

At 1:44 p.m., Cal Fire reported the fire had grown to seven acres and crews were expecting to stay on the scene well into the evening.

There was no immediate threat to structures, according to the San Marcos Fire Department.

Winds in the area were gusting at around 15 mph, the National Weather Service said.

#DeerFire near Deer Springs [update] The forward rate of spread on the fire has been stopped. Crews will remain at scene well into the evening to contain the fire. SB I-15 remains closed at Gopher Canyon Rd. with no anticipated opening, please avoid the area. pic.twitter.com/9sJTJ30jrG

Jay Mohr to perform at the Grand Comedy Club in Escondido