Fletcher’s comments come as the Recall Newsom campaign is seeing more support than ever before, and critics say it is just a way for California Democrats to try and discredit the strong opposition to Newsom.

Chairman of Reform California, Carl DeMaio, immediately called on Supervisor Fletcher to resign, and then appeared on KUSI News to demand he also apologize for his “outrageous” comments.

The LA Times editorial board also slammed the California Democrat Party for allowing comments like these against the effort to Recall Gavin Newsom. The article titled, “Recall is not a ‘coup’ or a joke,” said the California Democrat Party, “chose to kick off their counter-campaign with a ridiculous branding strategy that undermined the state’s legitimate direct democracy system, while engaging in the same type of inflammatory and irresponsible rhetoric that we’ve seen all too often from President Trump and his allies. Shame.”

Rodriguez explains that he represents, “a variety of political backgrounds, ethnic groups and world views within my district in Oceanside that support the recall efforts of Governor Newsom.”

Rodriguez concludes, “your hateful comments and dangerous smears must stop immediately. It is unbecoming of the office you were elected to serve.” 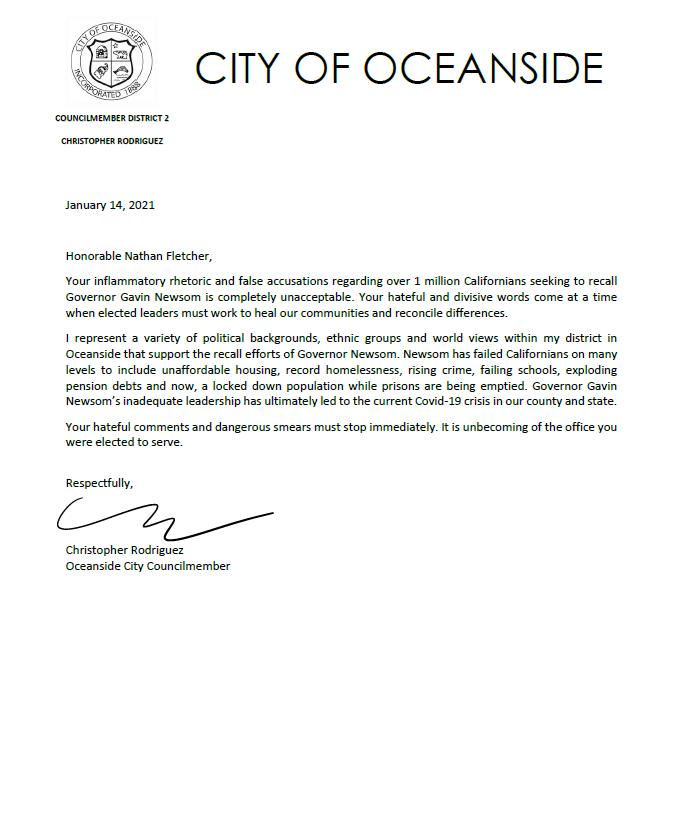 Update on local congregations one month after Supreme Court ruling